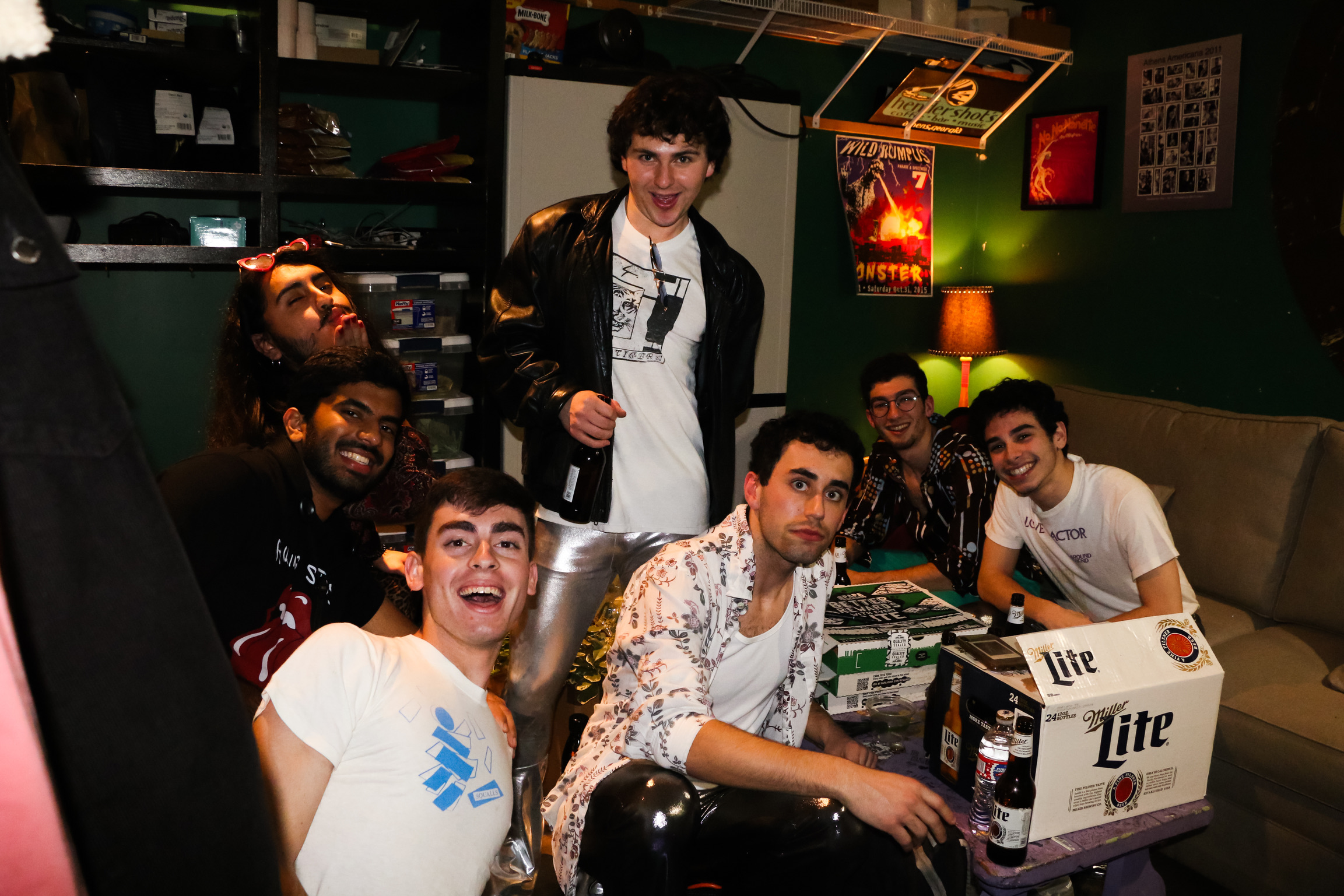 The Asymptomatics and their A-holes

Maxwell Mahieu heard Kevin Brown learning to play the guitar in their Tau Epsilon Phi (TEP) house early 2020. The band started out when now singer and keyboardist Mahieu and guitarist Brown “had this running joke about how we were going to get the [at the time nonexistent] band back together,” said Mahieu.

The pair started practicing together and decided to make it a little more serious. They began playing parties at their fraternity and renting out practice spaces playing mostly Beatles covers since at the time it was all they knew how to play together. But then when all UGA students were sent back home March 2020 at the start of the COVID pandemic the two were fortunate enough to live nearby in their hometowns.

Really Getting the Band Together

This change of scenery made Mahieu start looking for more members to practice with in his basement during quarantine that summer. Asking friends, people he went to high school with, met at UGA and anyone else willing to play to join, with some members joining the band for a bit and others permanently.

Initially recruiting guitarist Chris Natale,“telling” Sebastian Betancur to learn how to play bass in the span of two weeks and having someone he’s known “since birth,” his mother also known as Ringo Mom, on the drums. Actually it was her that named the band. But by the fall Ringo Mom was replaced by Nicholas Bonell and Tony Elengickal was added on to play the saxophone.

Together they learned to play covers of their favorite songs that usually had some kind of a rock influence. Though still unsure on how to categorize themselves within the music landscape and not wanting to be forced to one genre Bonell said, “fundamentally we are a rock band which is such a cliche answer, but I think a big part of our sound is honestly Maxwell, our stage presence and that energy that we try to put out to listeners.”

Those rock songs that they learned and energy they felt during practice allowed them to leave Ringo Mom’s basement to start performing around Athens venues with their debut show at Cozy Bar March 2021. After that show they decided to try performing more often, increasing their level of commitment to the band. Then adding Zach Negin, Justin Janawitz and Grant Chernau to the group as well due to graduations, distance, injuries and hospitalizations of other members.

Looking For Venues and Starting to Perform More

Booking shows was difficult in the beginning since they were new, had yet to make their own music and were navigating venues slowly reopening. “It was not the easiest to find at first, but we were just excited to play in front of people,” said Mahieu. Since they did not fully form until after the pandemic started, their experience is unique because this is the only way that they have gone about the live music scene.

But as most venues, bars and breweries opened back up fall 2021 with different rules and regulations for attendees, the band has felt honored to play shows as an opening act or headliner in Athens and Atlanta. Playing at places like the 40 Watt Club, the Warehouse and Smith’s Olde Bar alongside local musicians including Jameson Tank, Wim Tapley and the Cannons, Fun Room and Shameless James to then headlining their first show this year on March 25 at Flicker Theatre and Bar.

“Having the opportunity to play at these places that R.E.M., the B-52’s and Pylon have all played at is so strange to think about. Two years ago I would’ve told you that you’re crazy if you told me I could play there every other weekend. It’s set in a little bit, but it still hasn’t really set in to me,” said Negin.

Beginning “the Year of the A-hole”

As they began to play at more venues, their fan base grew as well. Although many of the members would argue that their parents are their biggest fans individually, as a group “the A-holes are our core group of fans,” said Bonell.

Along the way fans took to being called A-holes. A name that came about as spontaneously as the band was created.

The most important thing about truly becoming an A-hole is what first ever A-hole of the month Eileen Clark said that her favorite part was “getting sweaty and dancing” to their live music, which has become somewhat of a slogan to the group.

“I have not left a single concert of theirs and I have gone to basically all of them from the beginning at the fraternity and basement shows, not dripping in sweat. It’s the truest thing I could ever say about one of their shows. I think so many people can say that too because I know a lot of our buddies will be there too and get super hyped up so we sing and dance along. It just seems like a theme for all of their shows,” said Clark.

From dressing in orange jumpsuit costumes, recreating Freddie Mercury’s iconic Live Aid look, throwing fake mustaches into the crowd, kicking wooden boards on stage and anything else that they feel is “goofy” and exciting for a specific show, the Asymptomatics are there to entertain and have fun on stage. Constantly being unpredictable to A-holes everywhere, leaving them wondering what their shows will bring next.

“Every time I go to an Asymptomatics concert I never really know what I’m going to end up seeing, hearing or experiencing. It’s a fun surprise every time and I just love it,” said Farida Igbadume.

Then the more the band played together, it sparked the desire to write their own original music. “A big reason I joined and my goal through the whole process was to put our own music out there which I guess we now have,” said Bonell.

Beginning with writing “Silk Road Toad” over a year ago as their first attempt at an original which is featured on their EP “Modern Ooze” that was released March 24 of this year.

“The song is about traveling from Athens to the magical Atlantis bringing gifts along the way,” said Mahieu. The jumping point to create four more songs between the seven of them with Mahieu taking the lead in writing the lyrics, but it ultimately being a collaborative effort. The other released tracks are “Satellite Girl,” “Joro,” “52 Streets” and “Garçon.”

Negin describes the EP as “just the ooze, the product of young modern adults in a band. It’s an interesting name that took some getting used to and a bit of convincing, but the name truly does encapsulate it all.”

Although “Modern Ooze” is their only released music at the moment, the band has more songs to eventually share with the world. They are hard at work to produce more “creative secretion” and possibly turn the EP into a full length album.

But the EP isn’t their only songs on any of their setlists. The Asymptomatics continue to play their and the A-holes favorite covers like “Short Skirt/ Long Jacket,” “Private Idaho,” “Hocus Pocus” and “Great Big Kiss.” Trying to give the crowd an unforgettable experience with a mix of covers and originals at every performance.

Though unsure about what the future holds, the band is excited to be playing together in front of every crowd imaginable at places that were once unthinkable to book. The Asymptomatics are a group that started out for fun and are still trying to have all the fun they can on and off stage with their original and new A-holes.

Now do you think you’re an A-hole? Take the Asymptomatics Are You Really An A-Hole? Quiz to find out!