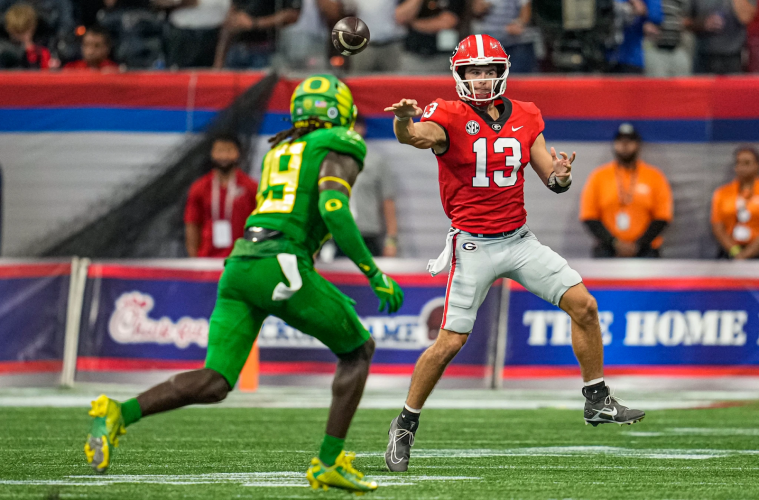 It’s safe to say after Saturday’s obliteration of the Oregon Ducks, if anyone wasn’t listening then, they are listening now. The Dawgs hunted down the Ducks in a 49-3 smackdown that clearly showed the team’s new lineup is a force to be reckoned with.

Although many people were surprised at just how badly UGA beat Oregon, Smart made it very clear how they did it. Smart said, “[Oregon Head Coach Dan Lanning] knows we have better players.”

The roster of talented players is no surprise considering how Smart has recruited during his tenure at UGA. Look no further than true freshman Malaki Starks, who made his name known to college football after making an incredible interception late in the first quarter.

Those people were  in for a surprise. In Georgia’s first offensive possession, the Dawgs passed the ball nine times, and only ran it three times.

Georgia’s leading rusher, Kendall Milton, only had 50 yards, which is highly unusual for the Dawgs who are known for running the ball and playing defense. Georgia running back Kenny Mcintosh had 117 yards receiving compared to his 18 yards rushing.

After the game, Smart said, “We want people that wanna come play in this offense. And I think when you watch what they did today, if you’re watching from home, you’re saying man I would love to play in that offense, they throw the ball around”.

Smart’s comments make it clear that Georgia hopes to attract highly talented wide receiver recruits to come to play for the Dawgs by putting the ball in the air.

The air attack was led by Georgia quarterback Stetson Bennett, who  threw for 368 yards on 25/31 with two touchdowns and zero interceptions.

Despite winning a national championship, some people still wondered whether Bennett would be able to hang onto his job for the whole season. Now, after Saturday’s impressive performance, there are whispers of Heisman’s chances for Bennett.

It is still very early in the season, but Georgia showed college football that there is no significant drop-off from last season after losing 14 starters. As the Dawgs eye another championship run, they continue to let everyone know that they will not be hunted.