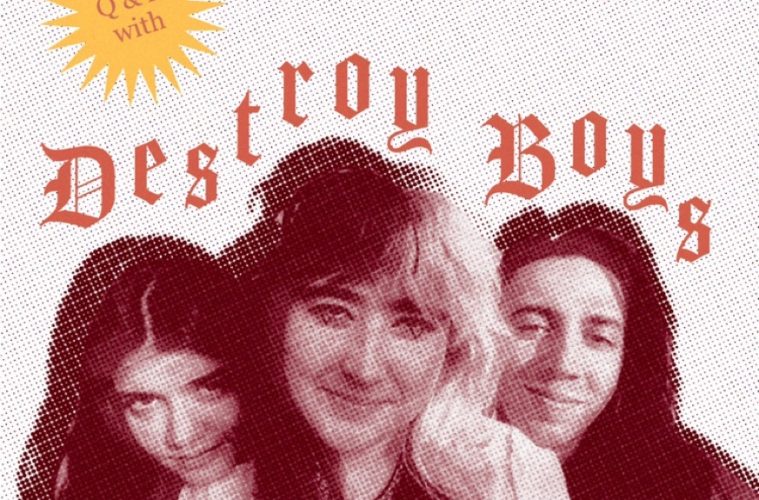 Destroy Boys concerts are rock star level events with an intimate and welcoming feeling of jamming with your closest friends that can’t easily be replicated. We were lucky enough to get to interview the band before their show in Atlanta performing their newest album Open Heart, Open Mouth. Sadly Alexia was dealing with a sore throat, but we were able to sit down and pick the brilliant mind of Vi discussing everything from mac and cheese to touring with Rico Nasty.

Who are you and who are Destroy Boys.

Hi, my name is Vi. Um, I’m here with my band Destroy Boys. They’re sitting right over there. Destroy Boys are a rock musical band originally from Sacramento, California. And now we’re based out of San Francisco.

Oh, man. Great question. I love all the songs on the record for different reasons. If I absolutely had to pick one probably “Locker Room Bully”, no what the fuck, “Drink”. That’s my favorite. Yeah, I love that song. I’m really really proud. Like, I didn’t think it was gonna turn out as good as it did. So I was really, really happy with how it came out. And my favorite one to perform is probably also “Drink.” I’ve also really enjoyed playing “Cherry Garcia.” We’ve been doing a new move where I have everyone put their flashlights up, lights go out and go. It’s really cool. It looks cool. Yeah, I hope you guys participate.

What do you think was the hardest part about recording this album?

Um, well, I think with recording, there’s always, like different challenges that present themselves. With this one, I think just getting the hang of the songs. This is our first album we’ve done where the songs weren’t entirely completely finished. I mean, this was the first time we had a producer, so we’ve never had a producer before. So we’ve never worked on songs with anyone and just kind of, I mean, Will made it extremely easy. But just getting used to that process I think was a little tough. Obviously, playing the parts was hard, fitting different pieces together was the biggest challenge. And it sucked that we weren’t able to go out and have fun, you know, our recording during COVID. But otherwise, it was like seamless. It was so so fun. It’s like when I was looking back on it. It’s like one of my favorite times with the band.

On Bob, you talked about anxiety a bit, what made you guys want to express that on this album.

A lot of our songs are about anxiety. I think that you know, since I said the word anxiety people have thought it to become obvious, you know, like through that track, but actually like if you I think that if you heard about us talking about earlier, so a lot like, meanwhile, they’ve been struggling with anxiety since day one. You know, we’re stressed out as fuck Bob was just I really wanted it to be. So we’ve only done it live once but my intention was to tell a different story anytime we do it live. I want it to be different every time so I wanted to talk about a different story I’ve had about anxiety every time. So Bob, the vocal thing was done in one take.

Awesome. How was the pandemic affected? Just like you personally and your work?

Me personally. Well, I already love to cook and I just started doing it way more. I perfected a ribeye. Well, I wouldn’t say perfected, I got really good at a ribeye. Narsai and I lived together during the pandemic. So we did steak nights, it was awesome. The band, it just gave us more time to write songs. Like I said, like we’ve never had the opportunity to really flush out songs. And we weren’t like writing all the time, like I for you know, I have a little bit of imposter syndrome because I heard about bands just being like, I made six, albums. Here like we did not, we needed it to like rest. Yeah, no, I’m relax. We’ve been doing this non stop for five years prior. So you’re like, it’s time to chill the fuck out? I’ll do some other stuff. regrouped and maybe this will turn out okay.

Who would you say your or what is your biggest inspiration?

Um, I was really inspired when I was younger by the 80s and 90s punk scene and the East Bay as a whole just because from the outside, it seemed very like “we do not give a shit about anything”, you know. And I was like, Yeah, I want to be like that cause I give a shit about so much stuff. You know? That’s really big for me right now. Currently, I’m really inspired by a lot of contemporary hardcore bands. I really love a band called Gulch, Scowl, Not to Loose, Code Orange. Those are like my biggest number ones right now. And you can hear that kind of in Locker Room Bully I took a lot of inspiration from the band called Gloss they aren’t together anymore, but they’re like an all trans female hardcore, band. GLOSS, A girl’s living outside society shit. Yeah, that’s fucking sick.

Who would be your dream collab and why?

I would love to go on tour with Rancid. I know Alexia really wants to go out with Rico Nasty.

That would be really fun. I would love to go on tour with more hip hop artists oh, Turnstile’s a big one. Obviously that’s really good.  I mean, anyone that likes the band.

Personally, how do you feel about touring?

I fucking love it? I love touring. It’s the best. It’s so hard. Because we’re not used to it anymore. Like our bodies aren’t used to it. So it’s like we’re all tired. Yeah. But it’s so fun. I miss my cats. But otherwise, I love being away from home. I love being in a different city every day meeting people. I love playing so much. The only difference from this tour and other tours is that we have a lot less downtime. So me and Narsai can’t really like, go to different restaurants as much. That was like our favorite part of going on tour.

I’ve been following you guys on social media now. And I think it’s really cool. How interactive you are with your fans and everything like on story posts and stuff like that. Do you think that’s something that you keep in mind like a priority when it comes to just your band as a whole? No, you guys operate.

Yeah. I mean, we started the band. And we were so young that it’s easy for me to relate to our, you know, majority young fanbase. I think it’s really important that we stay close and accessible to our fans, because they’re really important to us. And I want to hear what they have to say. Right now the big thing I’ve been doing on this tour is like dude, like, since the show’s been selling out, which is incredible. Like, there are tons of people scamming these kids. So what I’ve been doing is like handling all resales personally through our Instagram story. So I can suss out scammers based on who dms me and who doesn’t. And sometimes the fans don’t listen to me and it drives me crazy. And I have to just be like, okay, like, there’s only so much I can control. But we love interacting with them. Especially like up close and personally to I’ve been doing this thing where I kind of asked them to put away their phones for the last time so that we can just be present and it’s been great. It’s been so fun. Just looking right in people’s eyes and dancing.

Do you want to talk a little bit more about like the two tracks are like predominantly Spanish?

So obviously, Alexia wrote those two songs. I don’t speak Spanish, Alexia does. Do you want to text me something to say, they’re gonna write something.

Alexia: Te Llevo Conmigo is about my family and fate and stuff like that. It’s about that explainable. So a lot of like ancestry.

What do you all do to protect yourselves and the people around you while navigating the music scene?

I mean, we, we communicate with, I hope this is the answer to the question. We communicate with all these people like one on one. And I think we haven’t been doing it for very long. We’ve been in a band for six and a half years, but we’ve been doing it for longer. So I can kind of tell where people are, you know, messed up, and we’re lucky to have, like I said, like a very secure team around us. So we’re kind of protected from a lot of that stuff.. Um, and in terms of like, looking out for other bands, like, in our fans, like, all we do throughout our shows, is make sure that everyone said, there is only so much we can do while we’re literally playing. But I can tell you right now, like we’re constantly scanning, our merch persons on it, tour managers briefed on it. Alexia gives all kinds of speeches throughout the whole damn thing, which it’s very important to us, you know, sorry, here’s the licensing.

Alexia: And to the question you just asked, they say communication and making people aware is a big thing. You know, the fact that you know, these kinds of systems exist, I think is really important.

Do you all design your own merch?

No, we’ve been hiring, like our friends, to design merch. And then also a really cool Brazilian artist did some merch. An artist from Mexico that I’ve been following forever ended up doing the muzzle cover for us, like, it’s all people that we kind of know are just art that we love. I used to do all that. But then it didn’t end up that way. But I did that concept for the new album. A lot of people don’t know this and never asked me about it. I think they don’t realize every person on the cover of the new record represents one of the songs. Yeah. So I don’t think people know that. I think they just think it’s like a bunch of pictures. But every single one if you look, it’s all the songs.

Thanksgivings’ passed recently, and a lot of people have been like hating on mac and cheese. I want to know like your personal Thanksgiving dish.

Vi: What? People hate on mac and cheese?

Yes, people have been hated on mac and cheese.

Vi: Yeah, I mean, I love it in general. Sure. Right. Chicken’s always better. But fixing them in Turkey. It’s fun, it’s basic, it’s with your friends. Family, your family. I mean, Thanksgiving, as a holiday is really fucked. Yeah. But you know, celebrating it is more of a cultural thing. And like a family gathering where we all have time off and get to hang out together. It’s great. I fucking love to cook my dad and I are beast it so we always get their own, gravy’s my favorite though. That’s what I set aside and my family, so they like FaceTimed me and we’re talking to shit to me. We’re obviously on the road. We had Waffle House as our Thanksgiving meal. And they sent me a photo of my special bowl of gravy and Indian food.

So do you have anything you want to say to potential new fans or listeners from WUOG?

Hi, I’m Vi. Thank you for even considering checking us out. And if you like it, come to a show if you don’t godspeed.