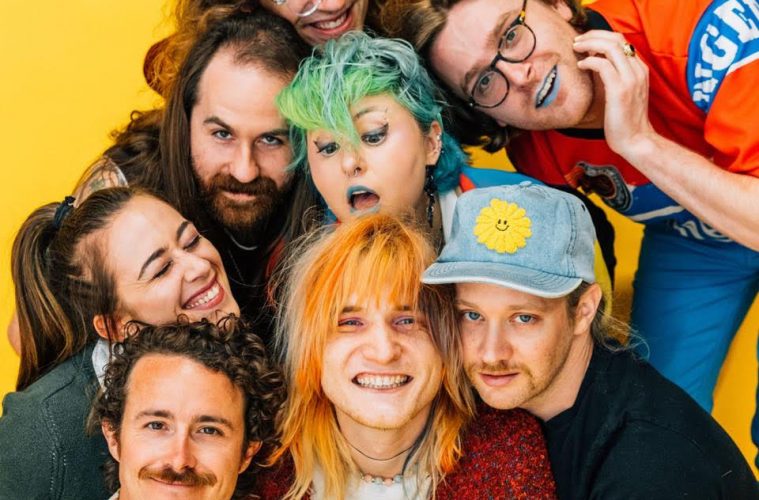 In 2019, members of the band Tayls went to the Bonnaroo Music Festival in Tennessee. When The Killers took the stage blasting their smash hit and party classic “Mr. Brightside”, Mo Balsam turned Taylor Cole in overwhelming excitement, and at a loss for words, they stammered out, “Have you ever…!?” Without missing a beat, Taylor responded, “I’ve always.”

‘Have You Ever? I’ve Always’ is a vibrant, dance-inducing album from Tayls, a self-described “friendship-punk” band out of Nashville, Tennessee. Tayls began as the dream of Taylor Cole, the lead singer, with his friend and roommate, Greg Dorris, who plays guitar for Tayls. Cole wanted the band to be focused on friendship and to explore the complex feelings, relationships, and consequences of those experiences through their music, which is apparent in both their debut album and their electric live performances.

So how did they go from being an idea between two friends to the greatest power-pop supergroup in Music City? The band is made up of nine members that were all handpicked by Cole and Dorris from their web of former bandmates, childhood friends, and even some people they had reached out to on social media.  Although the stage can get crowded with this many musicians, Cole says his reason for letting the band get so big was admittedly selfish.

“I wanted them all,” he says, “I need all the sounds happening at once and I refuse to not have them.”

Most members of the band are currently involved in other projects outside of Tayls (Mo Balsam of Molly Rocket, Atticus Swartwood of Molly Rocket and Travollta, Jo Cleary of Fable Cry, Jessey Dee Clarke of Creature Comfort, Andy Heath of Travollta), and this shows in their music. Cole says he formed the band in the image of a mash-up between a Bright Eyes performance at the SXSW festival, and his favorite band, The Flaming Lips, but all members of the band have brought their own flavors to the album, creating a shmorgisborg of sounds including pop-punk, Southern-rock, folk, and even some theatrical influences.

“Every single one of us are songwriters,” says Mo Balsam (keyboardist and co-vocalist), “So when we come together to create a song, everyone has a hand in it.”

But this large mix of musicians and influences isn’t an obstacle for the band. On the album, each song is distinct and their chemistry in both songwriting and performing displays the love they have for what they’re doing and for the people they’re doing it with.

“You would think with as many of us, and especially with as many big personalities as we have,” says Atticus Swartwood, who plays drums, “that there would be constant problems, and the fact that there isn’t, is kind of a miracle.”

Their first album “Have You Ever? I’ve Always” was released in July of 2021 and was produced by Jake Ingles of The Flaming Lips and engineered by Calvin Lauber of Julien Baker. The album is triumphant revival of power-pop. The lyrics are provocative and relatable, Cole and Balsam’s vocals are scream-out-the-window worthy (especially songs such as “Like a Bullet” and “Scarlet Letter”), and Cleary’s rock-and-roll violin adds a touch of smooth clarity. On stage, the energy of the band is explosive: Cole’s performance is captivating, and everyone else is smiling ear-to-ear, dancing as much as their instruments will allow, and singing along to every song. Their music is rejuvenating, their messages are refreshing, and the band is fearless.

Although the band released their album only a few months ago, they’re already starting on the beginnings of their next album.