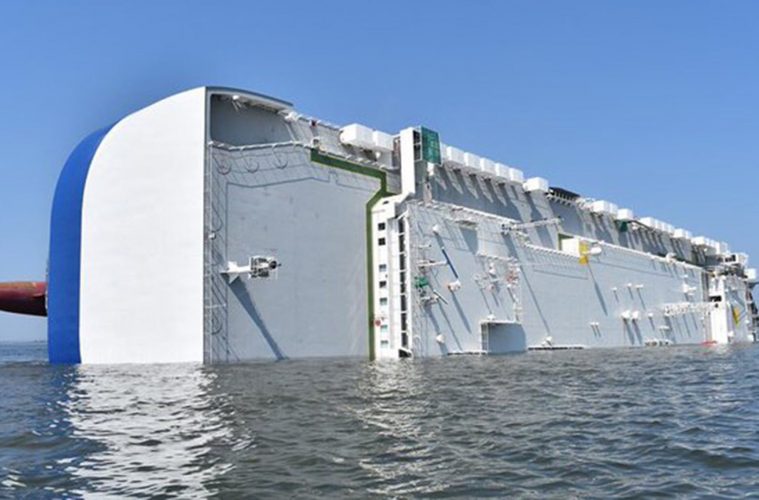 St. Simon’s Island, Ga. (WUOG) –Early Sunday morning, the Coast Guard received a 911 call stating that a cargo vessel had overturned and caught fire near a major port off the coast of Georgia. It is unclear to federal investigators at this time as to what caused the ship to capsize on its journey to Baltimore from the Port of Brunswick. Twenty crew members were rescued quickly, initially leaving four of the twenty-four man crew trapped inside the overturned and burning ship.

Problems began for the Golden Ray cargo ship around 2 a.m. when it rolled heavily to one side with twenty-three crew members and one pilot aboard. With the vessel being 656 feet long, or nearly the length of two football fields, it made the rescue of the four remaining men that much more challenging. The original rescue mission was halted due both to the ship’s instability and uncertainty about the fire aboard the vessel being completely extinguished, causing the mission to become too dangerous for searchers to enter the ship.

Rescuers finally made contact with the four trapped crew members on Monday. Coast Guard rescuers were able to find and contact the men by repelling down the side of the vessel and drilling a hole through the hull. Early reports indicated that the crewmen were alive and well but would remain inside the ship while rescuers came up with an extraction strategy. Searchers intended to deliver supplies through the hole drilled into the ship for the duration of the time it took to find a rescue strategy that was safe for both searchers and crewmen. At this time, three of the four trapped crewmen have been pulled from a room near the hull’s propeller and they are currently working to free the fourth crewman.

It remains a mystery as to what caused the carrier vessel to lurch, but there is speculation that weather could have played a role. Hurricane Dorian skimmed the coast of Georgia last week before later being downgraded to a post-tropical cyclone as it continued its way up the east coast. There was potential that high winds or rough water could have caused the ship to pitch to one side before inevitably rolling to one side. The vessel, carrying 42 automobiles, has also not released any pollutants into the St. Simons Sound so far; however, the Coast Guard have mitigation strategies should a leak occur and have created a perimeter around the ship that other vessels cannot cross.

The Port of Brunswick is one of the busiest U.S. seaports for shipping automobiles and heavy machinery, so the safety perimeter set up around the Golden Ray, halting all travel in or out of the port, has surely paused the shipment of thousands of vehicles. Other vessels are not allowed within half a mile of the Golden Ray under the emergency safety perimeter. This incident comes barely a week after the diving boat fire off of the coast of Santa Cruz Island in California that killed thirty-four people.