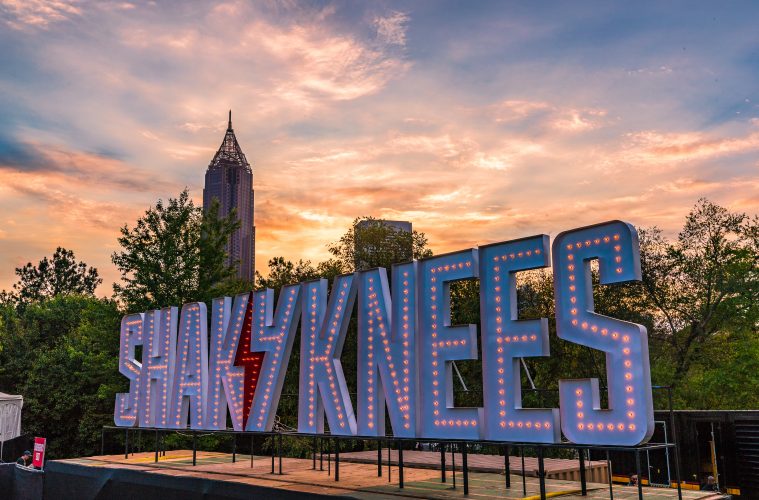 Although I had not listened to L.A. Witch before Shaky Knees, I found their set to be really enjoyable. The all-female trio is from Los Angeles, of course, and their music centers around powerful punk rock. This was a lovely contrast to the naturally shady layout of the Criminal Records Stage where they performed. I would recommend for someone who listens to The Coathangers as they have a similar sound. Especially for an early show on the first day, L.A. Witch managed to draw and engage a considerable crowd. 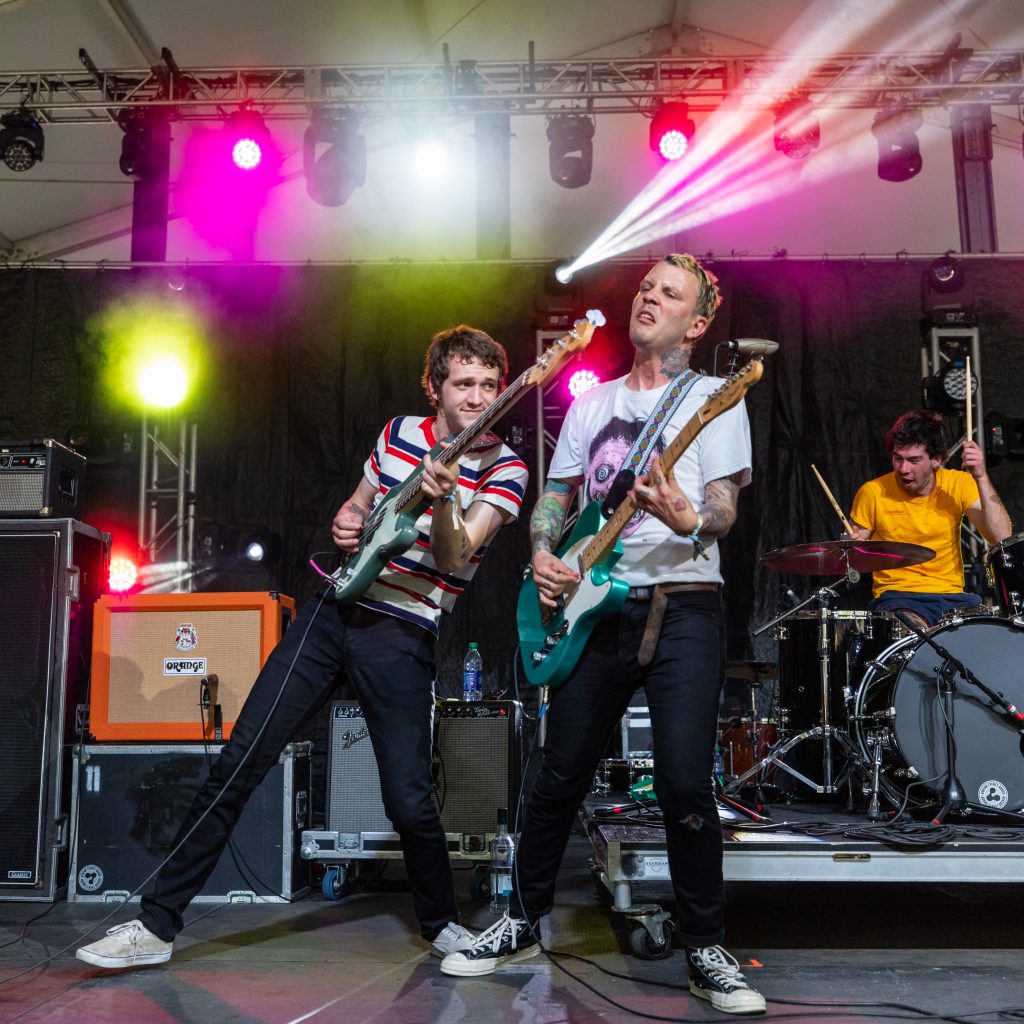 As someone who has seen The Frights more times than they’d care to admit out loud (six times, actually), I’m no stranger to the surf-punk band and their antics. While their Friday set at the festival was a fantastic frenzy of moshing and crashing bass lines, their late night show was where The Frights really shined. Though their setlist barely varied from their earlier performance, the band seemed at home on the stages of the Masquerade. From the opening notes of the fan-favorite “Crust Bucket,” the crowd (strangely comprised of mostly barely of-age teenagers and middle aged men) was immediately bouncing around, heads bobbing and smiling faces. What really made the show, though, was the banter. Bassist Richard Dotson, guitarist/singer Mikey Carnevale, drummer Marc Finn, and guitarist Jordan Clark have a chemistry that bears out effortlessly on stage. Their quick, quiet exchanges quickly turned into a long, drawn out song, as they covered Journey, Weezer, and all other kinds of artists in one go. The crowd and the foursome laughed together, and it created a closeness that other shows often lack. As the time started to dwindle towards 2 AM, “Submarine” blared throughout Purgatory, a seemingly perfect way to end the set. With one last mosh pit and one last chance to sweat and scream, the crowd took advantage of every second, as though everyone in the room knew how special of a moment we were experiencing together. 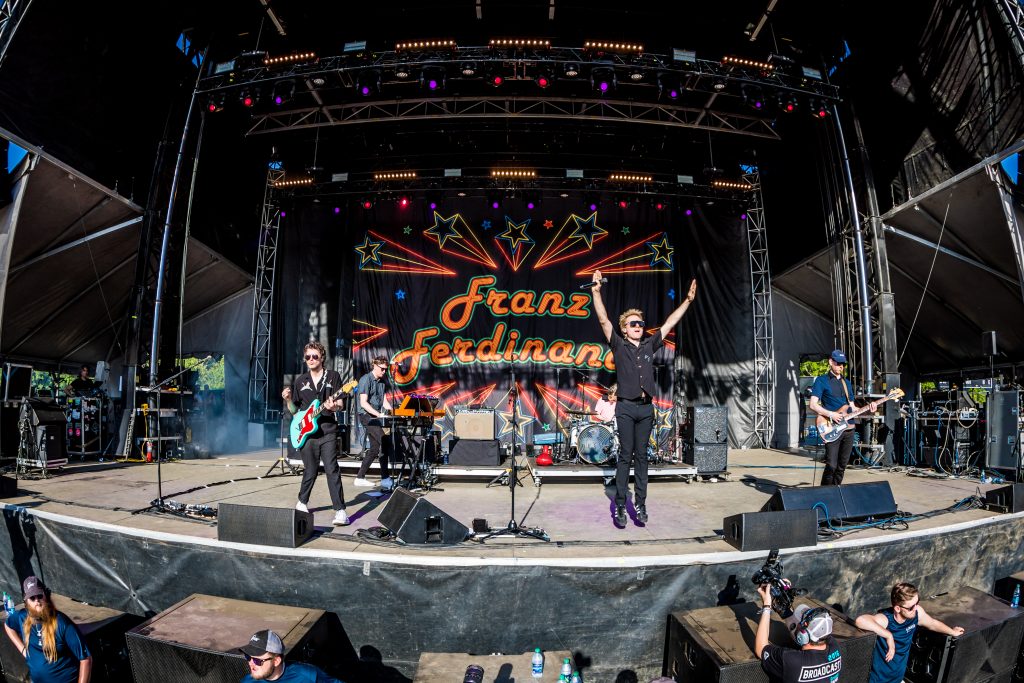 Seeing Franz Ferdinand perform “Take Me Out” live definitely fulfilled a goal since high school. Beyond that moment, I found the entirety of their set very amusing. Their more recent releases incorporate spacey synths, at moments sounding a bit like ELO. The highlight had to be seeing just how much fun the band had up on stage with well-rehearsed jumps and coordinated dance moves. I found that it was a really good mix of their past and present work so that there was never a dull moment. 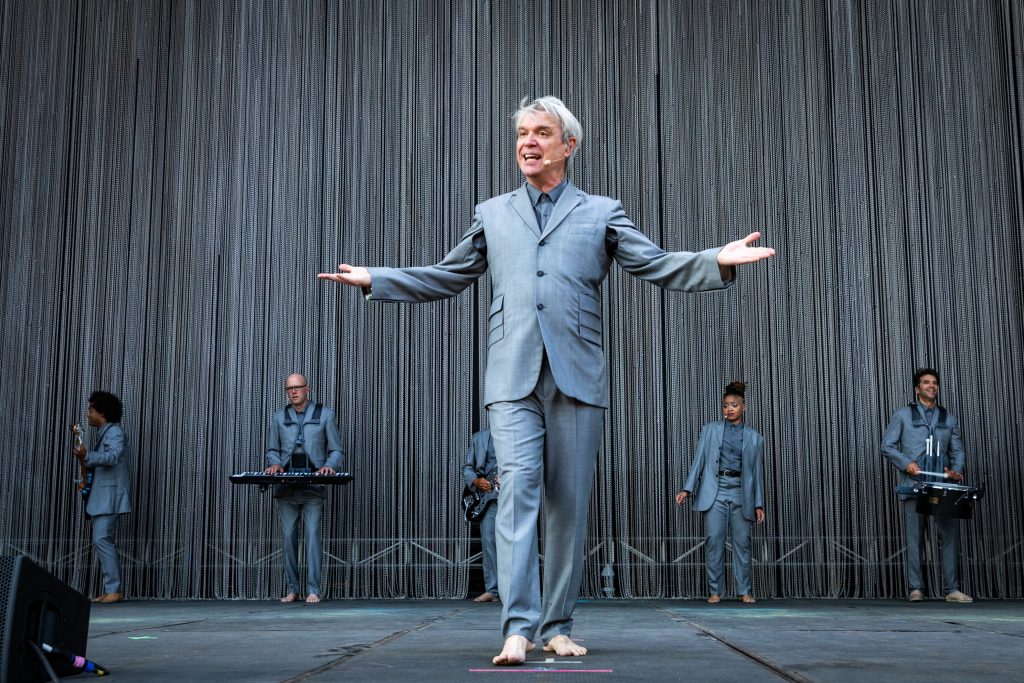 During his sunset Friday performance, David Byrne made it very clear that he is much, much more than a nostalgia act. While, yes, he did perform some Talking Heads hits like “This Must Be the Place” and “Burning Down the House,”, the bare-foot, gray-suit-clad musician made sure everyone knew his talents grow outside of the beloved new wave band. With a 12-piece band all in matching suits, the set truly became a performance. From the front row, I felt like I was being let in on something amazing, something that brought people together. Truth be told, Byrne exceeded any expectation I had (even after I watched his similar Coachella ). His charismatic, friendly personality emanated through every song and every choreographed dance move. Even his subpar singles like “Everybody’s Coming to My House” were turned into masterpieces on the stage. And while I admittedly cried from sheer happiness during the entirety of the performance, it really was one of the best sets from the entire weekend.

BRONCHO put on a very entertaining performance on the second day of Shaky Knees. They came out with a casual manner that seems fitting for their style, but quickly made it apparent that guitarist and vocalist Ryan Lindsey was truly having fun. Throughout the set Lindsey hopped around and dramatically threw his arms in the air in a delightful fashion. Although the vocals were sometimes mumbled, I still enjoyed the set and thought that more than anything, it was just fun. The rest of band certainly maintained austerity which kept things on track and overall everything really pulled together for a convivial set. 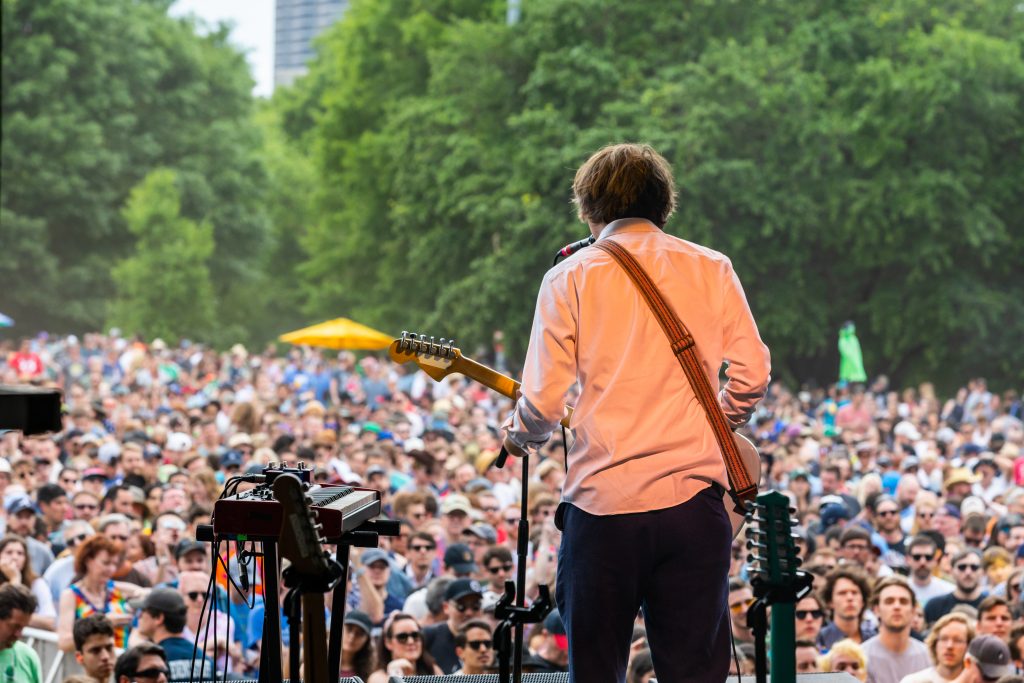 After seeing BRONCHO, I stayed at the Piedmont Stage to see Parquet Courts perform. I was really glad to have these two bands back-to-back and thought that they really complemented each other. Early on, they performed “Dust,” one of my favorites from their most recent album. They also brought out additional percussion for one of their new singles, “Wide Awake,” which was really great to see. The banter between Andrew Savage and Austin Brown was thoroughly entertaining and at one point they even promoted their own merch. I have to admit, it brought my attention to the unique and uncommon Parquet Courts football scarf. Overall, a very cohesive set with a good flow. 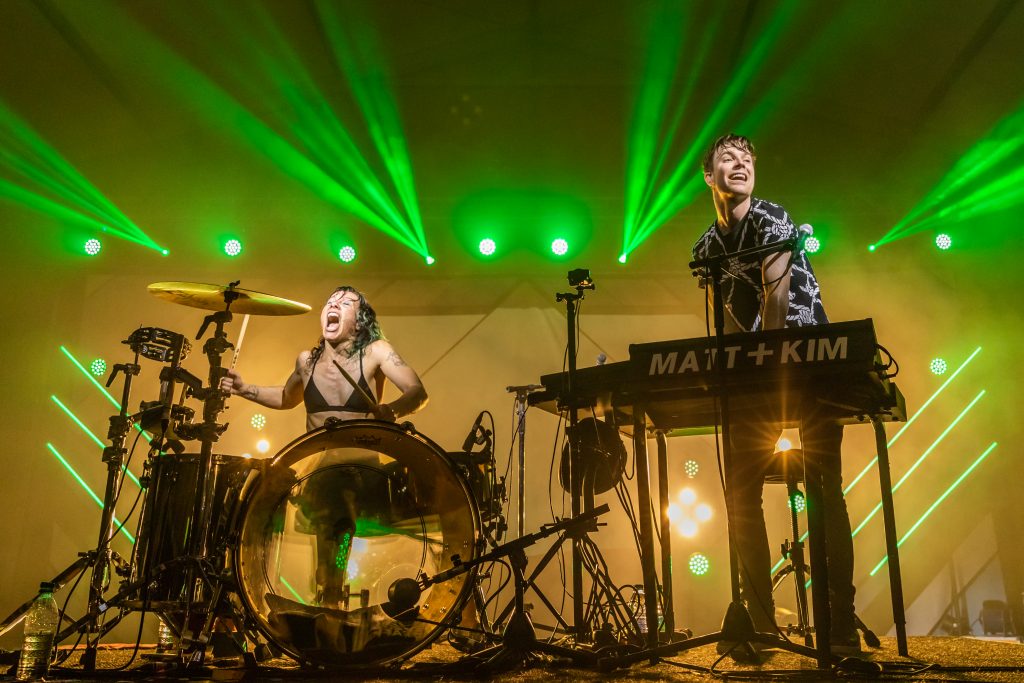 When Kim Schifino from Matt and Kim said that things were gonna get “real weird” during their Saturday set at Shaky Knees, she really wasn’t kidding. Balloons, blow-up dolls, flashing, an unexpected mosh pit and EDM-esque covers were only a few of the things that the couple did to go above and beyond during their set. Though the theatrics were borderline outrageous, every single second of their performance was exciting, and got everyone in the crowd to dance. From opener “It’s Alright” to a cover of Afrojack’s “Barbara Streisand” to the two-part encore featuring “Daylight” and “Let’s Go,” their setlist never lapsed in its upbeat melodies. The crowd may have left with the question “What just happened?,” but if one thing is for sure, everyone left with a smile on their face and a memory of a good show. 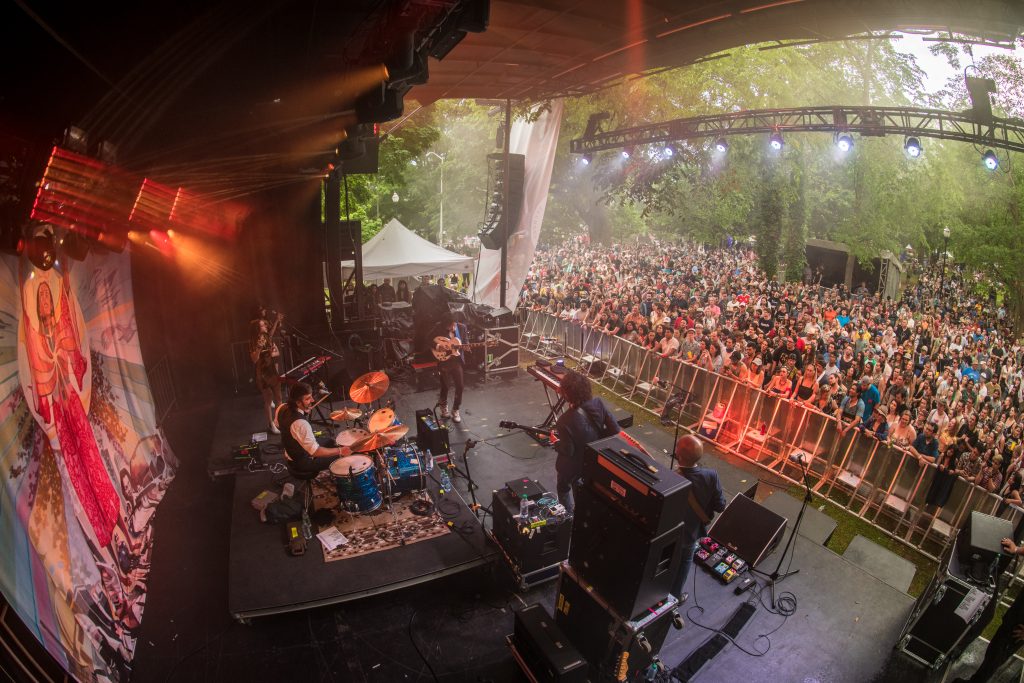 Moments before Chicano Batman came on stage, it started raining, but this did not put a damper on their performance at all. As seen in many of their promo pictures, they performed wearing matching blue suits which accompanied the music beautifully. Each song was performed with precision and maintained the smoothness found on Freedom Is Free, with added flourishes of a live performance. As mentioned in our festival preview, I was really excited to see Chicano Batman’s performance since they sing in both Spanish and English and was glad that they performed my favorite “Flecha Al Sol.” 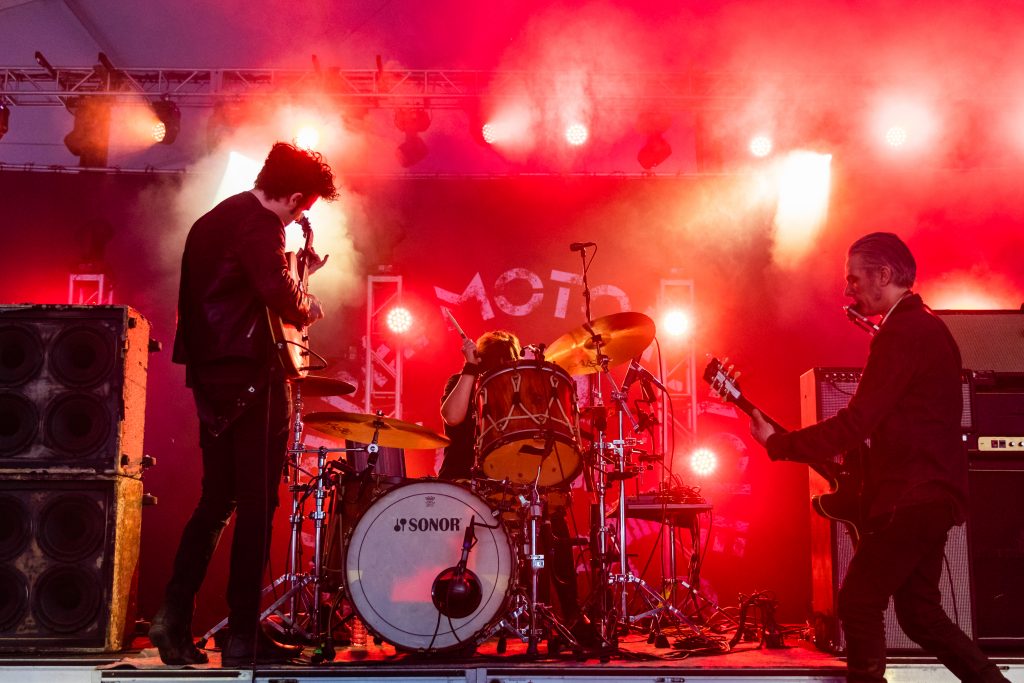 I have heard a lot about Black Rebel Motorcycle Club in the past, but had never actually listened to them prior to Shaky Knees. They attracted a crowd of all ages, including some merch-sporting children. Their sound could very much be described as noise rock, but also featured quite a bit of variation in song tempos and incorporated harmonica as well. At the end of the show, Robert Levon Been came up to the barriers playing guitar, which really ended the performance with a lot of excitement in the crowd.

For their first American festival, Australian natives Parcels stole the hearts of Shaky Knees attendees. As someone who was relatively unfamiliar with their music, I was extremely surprised at just how fun their set was. With funky, psychedelic-like synth beats and guitar rhythms, the entire crowd at the Piedmont stage was up and dancing, despite Georgia heat and blowing dirt.  After a long weekend at the festival, it was clear that people were starting to tire on Sunday. Until Parcels, that is. At the end of their set, I felt like I had a new burst of energy. Parcels were exactly what the final day needed: upbeat, fun music that could be enjoyed by people with all kinds of tastes in music. With songs like “Tieduprightnow” and “Overnight,” it was practically impossible not dance. The joy coming from the band was infectious, and it spread throughout the crowd within minutes of the start of their set. Parcels was the perfect way to end the weekend, and a perfect way to welcome the warmth of summer. 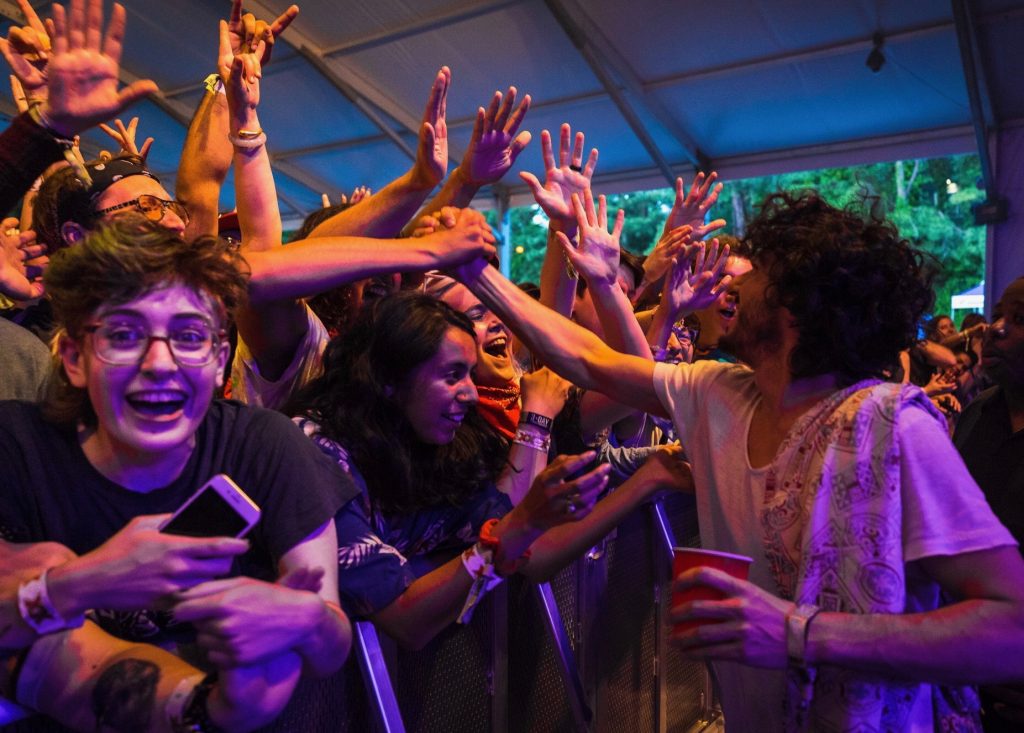 The Voidz were the last band that I saw at Shaky Knees and I could not have thought of a better way to end the weekend. The set was at the Ponce de Leon Stage which was under a tent, so the light display had great effect on the mood and energy of the performance. I especially enjoyed their performance of “ALieNNatioN” from their most recent album which was very surreal to see live. Of course, Julian Casablancas maintained a lot of his casual stage demeanor – tossing the microphone to the music and swooping around the stage. At the end of the set Jeramy “Beardo” Gritter brought his guitar up to the audience, inciting a lot of shouts of approval. For their encore, surprisingly, Julian performed “I’ll Try Anything Once” with Jeff on the keyboard. As many of members of the audience wore The Strokes shirts, this decision definitely appealed to the crowd as it was a demo for “You Only Live Once.” This performance definitely exceeded all of my expectations and was an amazing way to finish off the final day at Shaky Knees.

All photos courtesy of Shaky Knees.