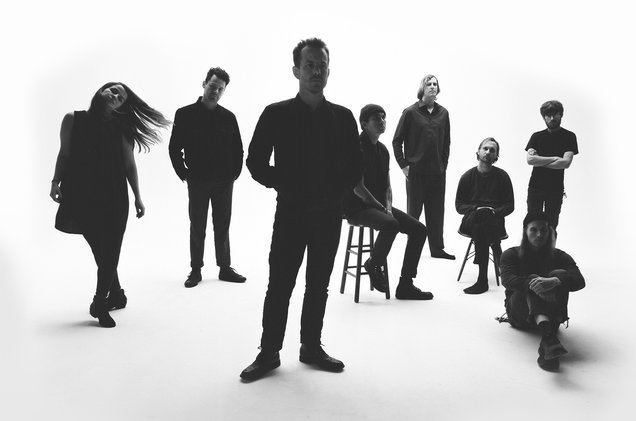 Typhoon, an indie rock band from Oregon, took the stage at Terminal West after two exciting opening acts on February 2nd. Sunbathe, a female-fronted act featuring Shannon Steele of Typhoon, started the night out with simple, yet energetic songs. Their compelling set was followed by Bad Bad Hats, fronted by Kerry Alexander. Alexander’s softspoken, witty banter was accentuated by her striking lyrical ability. Bad Bad Hats presented a charming set, incisive lyrics embedded in upbeat, light feeling tracks. Typhoon then came on, much to the excitement of the anxious crowd. Though cut down from their eleven-piece band to just seven members for this tour, they took up every inch of a space on the stage. Lead singer Kyle Morton kept energy high throughout the set. Though two drum kits, three guitars, keys, violin, and a variety of other instruments seems overwhelming, the band demonstrates a clear understanding of how to balance chaos. Many tracks blend seamlessly from one to the other, and oftentimes minutes would go by with the members clearly enjoying just playing off each other. Standout elements include Shannon Steele’s vocal harmonies, as well as her violin solos. A blend of dark, ruminative lyrics with thrumming guitars and swelling choruses creates a sort of religious feeling in Typhoon’s show, like letting yourself ride, if not your own, the band’s tidal wave of emotion.