The Tate Theater had all 500 of its seats filled up for University Union’s advance screening of Justice League.

On Wednesday, November 15, 2017, UGA’s University Union hosted an advanced screening of Zach Snyder’s Justice League at the Tate Theater in the Tate Student Center. This screening was going to be competitive in nature, as the theater only has a capacity of 500 students. As of Wednesday evening, the Facebook event had approximately 1,100 students stating that they were “interested” in seeing the event, while 421 stated that they were “going”. Thus, a race to get a spot in line was on. 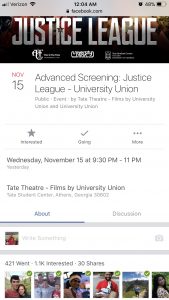 A large turnout was expected based on the interest on University Union’s Facebook event page.

Catalina Duling, a third-year biology and German double major, was one of many to have arrived early for the advanced screening. She managed to arrive to get a spot near the front of the line. “I arrived right after I got off from work. I knew with such a huge student population and only 500 seats, the race for a spot was not going to be easy, especially with it being a superhero movie! Getting there super early was the only guaranteed way of seeing this advanced screening”, Duling shared.

Duling admitted that she “wasn’t really sure what to expect with this movie”. She also shared that she “only started getting into the DC films with Suicide Squad and Wonder Woman”, both of which Duling thought were “pretty good”.

“I was never able to get into the Superman films, so in my mind, I was thinking Justice League would be either really, really great or a complete trainwreck”.

Kevin Romero, a second-year biology major, was also one of the many who arrived early to the Tate Theater. Romero arrived at 5:45 pm thinking there were not going to be so many people in line, but was quite surprised to see many already in line. “Initially, I was thought to myself ‘why are there so many people here already?’ I am fortunate to have arrived early and found a spot really close to the entrance”.

Romero also expected the film to be “entertaining”, but stressed that he did not expect the movie to have a good story. “Zach Snyder did a good job with Man of Steel before this, but you can tell he struggles with telling a fluid storyline. Batman v. Superman was also very convoluted”.

With a running time of one hour and 59 minutes, Justice League deals with the challenges that Batman and Wonder Woman face while recruiting a team that will challenge the global threat posed by the supervillain Steppenwolf in light of Superman’s absence.

Upon the spectacle’s conclusion, audience members overall had positive, yet mixed reactions.

Duling expressed that the movie was “great”. “Waiting for four hours was well worth the wait. It was a good balance of intensity and humor. I think this will prove for some competition against Marvel”.

Duling stated, however, that she “wished that they could have elaborated a little more on Cyborg’s and Aquaman’s backstories like they did with The Flash”, but it “wasn’t even a big deal.” Duling gives the movie “a solid 9 out of 10” and would “definitely recommend it”.

Fahim Salewala, a third-year accounting and MIS major, thought the film was “good”. “I would say that some parts were cliché, but I loved all the Flash scenes!”

Kevin Romero also expressed praise for the movie. “I really enjoyed the film in the sense that I had to turn off my brain in order to enjoy it. There were some holes in the plot, but if you put that aside, it is such a fun movie, one that you can enjoy without thinking about it too much. It was definitely worth the four-hour wait”.