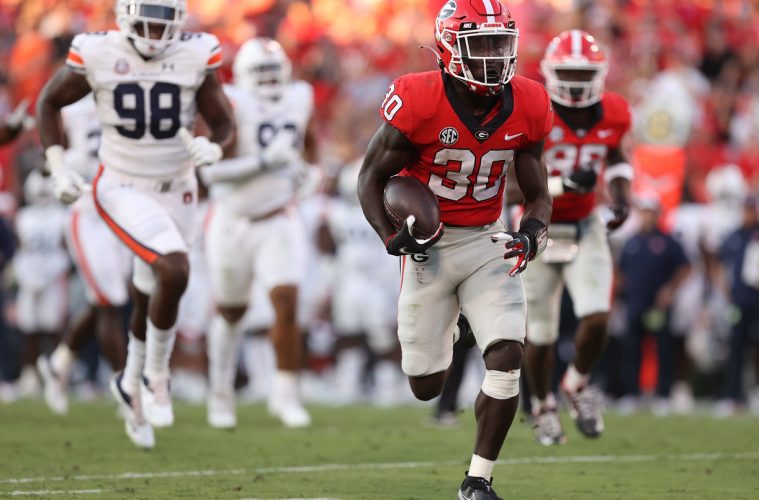 Georgia Runs To A Dominant Win Versus Auburn

The Georgia Bulldogs beat the Auburn Tigers 42-10 for their sixth straight win in the “Deep South’s Oldest Rivalry” on Saturday October 8th.

A slow start to the game left fans concerned that the struggles from the last few weeks might continue, but after a pair of rushing touchdowns from Daijun Edwards and Kenny McIntosh, UGA went into the half with a two-score lead.

Coming back from halftime, a fumble from Stetson Bennett led to an Auburn field goal, giving the Tigers their first points of the game. Their only other points would come off a 62-yard touchdown run with just under 10 minutes left in the game.

However, those points would prove to be meaningless as Auburn couldn’t stop the Georgia offense in the second half.

The Bulldogs would run in two more touchdowns by Edwards and Branson Robinson before the game ended.

Bennett’s struggle with accuracy continued, but he finished the game 22 of 32 for 208 yards. His leading target was Ladd McConkey with 5 catches for 47 yards.

The run game was truly the difference as the team rushed for 292 yards compared to Auburn’s 93, despite starter Kendall Milton being ruled out for a groin injury in the first half. Robinson led the team in yards with 12 carries for 98 yards. Edwards finished the game with 83 yards and 3 touchdowns on 12 carries.

Georgia’s defense looked more like themselves, giving up just 10 points. They were able to put pressure on Auburn Quarterback, Robby Ashford, numerous times, but did struggle to stop him when he got out in the open.

“Pressure up front was great. I thought our guys were disruptive,” Head Coach Kirby Smart said after the game. I thought Coach Schumann and the defensive staff had a good plan to flush him, but man he is tough when he gets out of there.”

This win also proves that Dawgs are able to find ways for their offense to flow without huge production from their normally dominant tight- end room.

Georgia still has some things to work on, but the team played well and got the job done against Auburn.

The Dawgs will take on Vanderbilt on October 15, at 3:30 pm ET in Sanford Stadium.