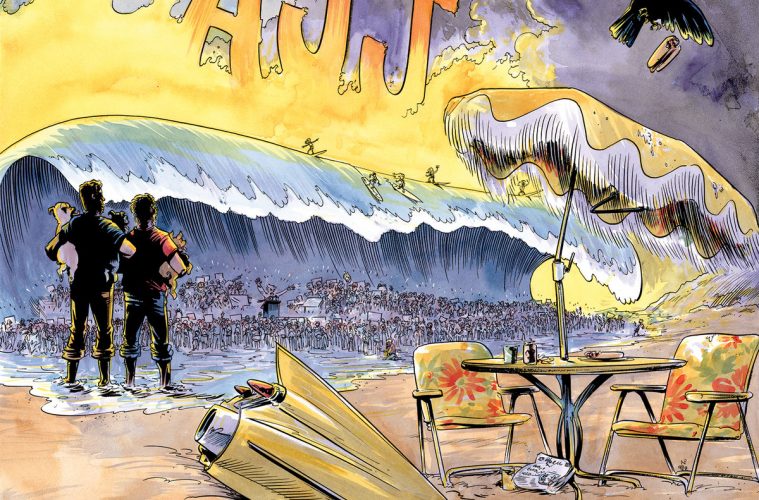 Good Luck Everybody sees a band that has long expressed ideological ideals and lamented personal traumas moving towards a much more political direction. Good Luck is by far AJJ’s most folk-leaning release. It is filled with folky, 60s-inspired instrumentals and reverberating vocals, most prominently on “Body Terror Song.” It starts off with “A Poem”, an intensely on-brand criticism of the music industry, it’s least political song by far, claiming that songs steal from unappreciated artistic outputs to create a commercial product for the masses. The band’s politics on the record are harshly nihilistic, essentially claiming that the worst time for the planet is right now followed by an apology for the listener having to exist at all (“Normalization Blues,” “Body Terror Song”). The most apparent examples of cynicism are on “Mega Guillotine 2020” and “Psychic Warfare,” which advocate for the killing all of those involved in the modern political scene.  While the politics of the record come off as confrontational at face value, they reveal a deeper anxiety of the new decade, a lack of human interaction. Good Luck comes off as a request for global unity from a group of people starved for interpersonal intimacy, perhaps by their own abrasiveness (e.g. their original name: Andrew Jackson Jihad). The thesis of the record is that people’s feelings disenfranchisement by their governments has coincided with the internet age, leading to people turning on each other, only able to find solace in non-human things like their dogs (“Maggie”). On “Loudmouth,” even those who agree with each other see their ability to connect as compromised. “Your Voice, as I Remember It” openly longs for the way things were before the world was digitized. The inclusion of the second half of the title, however, suggests an acknowledgement that perhaps things were not as idyllic as we remember them being in the past. Ultimately, Good Luck Everybody is a cry for help, a call for people to realize that they have built themselves into fortresses (“A Big Day for Grimley”) devoid of the collaborative aspects that have allowed humanity to build itself up to this point and it may, perhaps, suggest that we are not a species truly equipped to live with our current level of advancement. The title is apt because AJJ does not offer any solutions because there just might not be any to be found.
-Leo Pryor