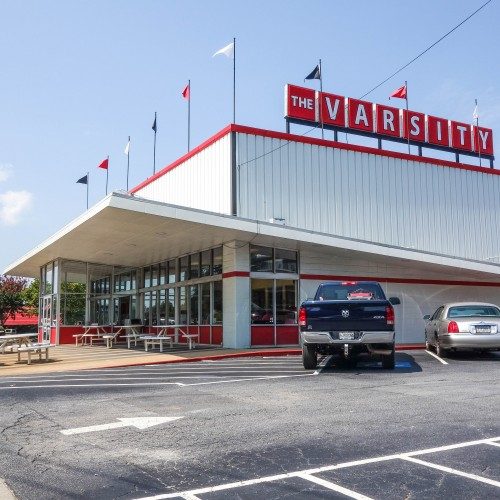 ATHENS, Ga. (WUOG) – The Varsity is set to get a makeover if a proposed plan is approved. The ACC Planning Commission created a plan in December and the Athens-Clarke County Mayor and Commission will review it in February. The proposal is for a zoning change to the block at the intersection of West Broad St. and Milledge Ave.

The area is also home to the Mack-Burney House. The block stretches 6.7-acres and is bordered by Milledge, Broad, Chase St., and Reese St. It is set to be voted on at a meeting on Feb. 5.

The Athens-Clarke Planning Commission unanimously recommended approval of the plan. The Athens-Clarke County commissions talked about the request in their agenda-setting meeting on Tuesday, but won’t vote before the February meeting.

The Gordy Family owns The Varsity, a restaurant known for their chili dogs. Varsity workers have been asking customers “what’ll ya have?” for 90 years. The Gordy’s also own seven other locations in Dawsonville, Atlanta, and metro Atlanta. The family began buying up properties on the block in 2015. In May 2017, they filed demolition permit applications for some of the buildings in the area. The family submitted the plan and are asking for the rezoning change. In addition, they are asking for a change in Athens-Clarke’s Future Land Use Map. It is currently listed as a “main street business” and “traditional neighborhood”, but the request is to change to “general business”.

The family has not yet submitted a specific design plan according to Athens-Clarke Planning Director Brad Griffin. While the redevelopment is not yet completely determined, there is a proposed plan, which limits the maximum building height. It also details what uses are prohibited, such as mortuaries and self-service storage. The Mack-Burney House will also be preserved. The planning commission will ultimately have to approve the finalized plan.

Also on the agenda for the February meeting is a vote on other developments in East Athens. When asked about the plans, Mayor Kelly Girtz said, “I think this is a win for everyone.”