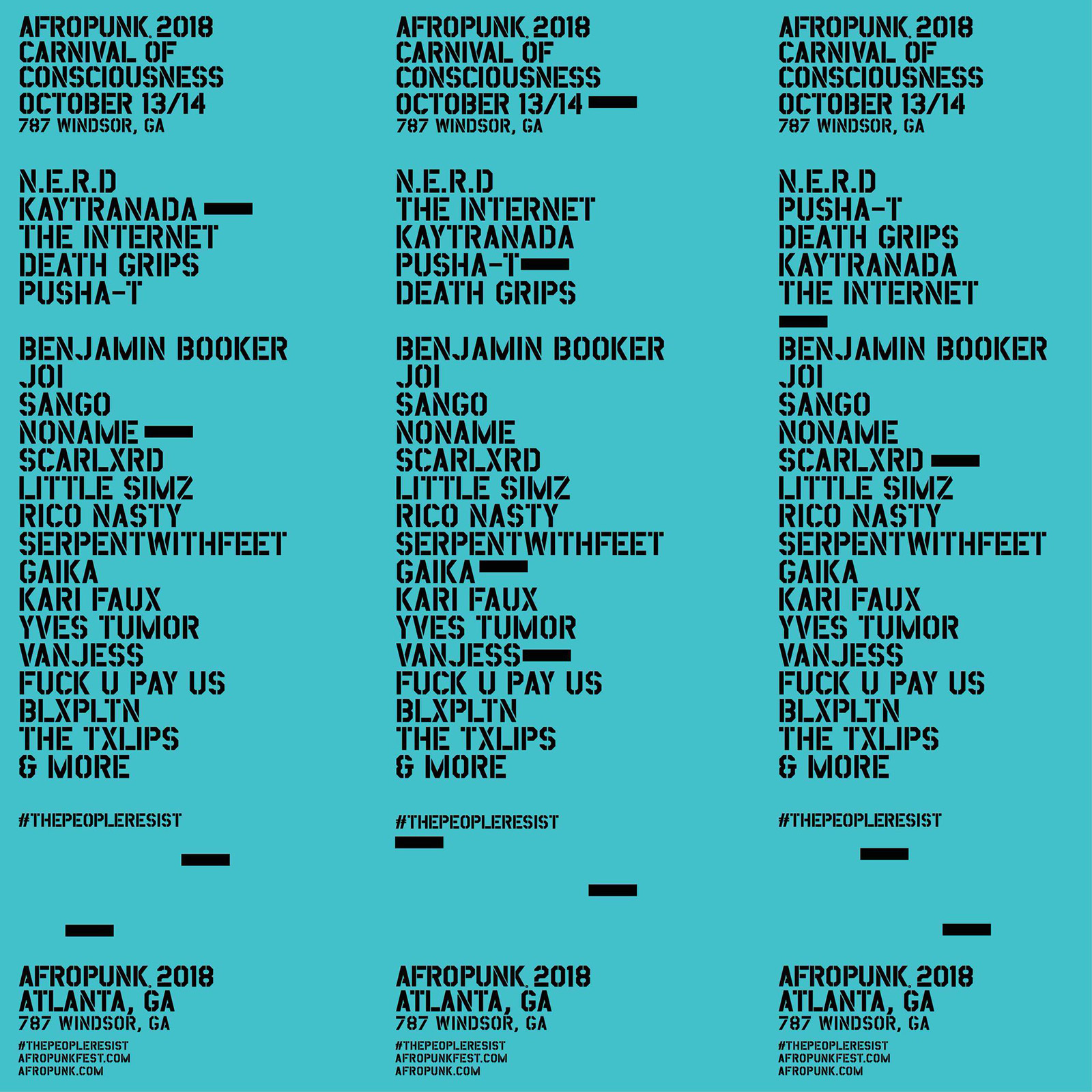 Afropunk is a festival that gives you a lot to think about. From the social aspects of the event, dealing in visibility for the Black community and providing a space where our voices can be heard, to “just the music,” I certainly spent a lot of time at Afropunk Atlanta trying to figure exactly what it was I should be taking from the experience. Afropunk is “for me.” That is to say, I was made for giving the spotlight to people like me, so we could shine for a little while in a place all our own. But what does that mean? Do I have to take anything away from this? Why can’t it just be about the music? These were some questions I considered. What I found was that the festival could never just be about the music. Music is art and art never exists in a vacuum. For the people, myself included, Afropunk is for life in a world where people’s bodies and opinions are constantly derided and politicized. Black people, no matter how famous or unknown, all have to deal with that reality. Afropunk is a rejuvenation of sorts. It acknowledges that struggle and gives us the tools, the words, and the feelings we need to face it head-on when we come down from the festival’s high. This was my first Afropunk, and I’ll never forget it. -Kiara Halls

Read out to see how WUOG’s media correspondents soaked in all of this culture and music at Afropunk 2018.

The opener of the festival was a shotgun blast: Samurai Shotgun. They came out strumming, bombastic guitars, with a dreadlocked lead singer dead locked with the crowd. The intrigue of this first act was at its cross section of many genres. This set the tone for the festival. While AfroPunk denotes a explicitly traditional themes of punk it has often found artists at intersections of genre. Maleo Henley, Samurai Shotgun’s frontman, describes their music as “alternative hardcore,” maybe even a “new metal.” This all falls under too broad of a description to be merely the ‘punk’ denoted in the festival’s name. “Punk to me, besides a genre, it’s an attitude, it’s a style, it’s fashion, its really all about that attitude,” Henley said. That attitude takes place in this beautiful visual that encapsulates their “feel” of punk, reinterpretations of punk as more than sonic.

Henley goes on to say that AfroPunk is a festival for “the alternative minorities” for those who would “get clowned by other minorities for listening to Nirvana or Rage Against The Machine or something.” The uniqueness of the festival creates a space for those not typically in the mainstream of what it means to be Afro-American or Afro-Caribbean for some examples. This fringe of the fringe is similar to the way that the festival pushes the boundaries of punk. -Chris Tidwell

Day 1 of the festival was a little odd. The performances started late, some not at all, the DJs were nowhere to be found and the crowd was restless. Benjamin Booker’s set wound up being the perfect thing to mellow out the cranky masses. Playing hits from off his 2017 album Witness, Booker’s bluesy renditions of “Believe” and “Witness” turned out to be just the calm that was needed before the musical storm that was the rest of the night. An intimate set, it was just Booker and two others onstage, he managed to make the massive festival lot feel like a coffee shop on a rainy day. If it weren’t for the people swinging glow poi around, I could’ve sworn it was. -KH

Neo-soul was definitely one of the standout genres in the AfroPunk grab bag of sounds. With the “neo” in the genre name, it opens up a debate of what the qualities of this new form of soul music are. Serpentwithfeet (Josiah Wise), a relatively new act, was a fascinating performance and cross section of this ever-emergent genre space. Despite the neo-soul label, Wise fits into an older gospel or R&B tradition. He would take breaks the way a gospel singer would to embellish the melodies and show off his range. The vocal rubato lines Wise would flaunt had onlookers cheering. While his set wasn’t the most attended, the small crowd had excited listeners making it seem like a bigger audience. There was something refreshing about a solo singer showing their manicured talent that was a sort of oasis from the maxed out instrumentation of the other groups. His show had respectful listeners who came for drama and opera, rather than to dance. No doubt Wise has gospel chops beyond that of any neo-soul singer that comes to mind. Serpentwithfeet is a great example of a harkening back to roots of traditionally African American sounds but with a whole new register of lyricism. The power of Wise’s lyricism is in his sexuality. He sang the emotional “Four Ethers”: a song about unrequited love of gay children to their parents. This modern lyrical cry comes from vocal skill that could make him an alto in a cathedral choir. It is an inspiring collaboration of significant lyrics with lauded traditional technique. -CT

I came into Afropunk with little to no knowledge about who Sate was, and left the festival wishing she was my wife. She slammed out banger after banger from her album RedBlack&Blue, pumping energy into a crowd that was more than ready to hate on her. You see, Rico Nasty was meant to perform, but a scheduling mix-up meant that Sate wound up being the second artist of the day on the green stage instead. She took it in stride though, and rallied the crowd with anthems like “What Did I Do” and “Silence,” and charmed us with the rapport between herself and her keyboard player. Sate is a power-rocker straight out of all the best parts of the eighties and it was an honor to attend the Toronto artist’s first US show. Marry me, Sate. -KH

A sort of dirty reason of mine to go to AfroPunk was to indulge myself by seeing Death Grips live. There is a cultish aura around the group’s hate of their fans demonstrated by the group not showing up to shows, not doing interviews, and from their song’s heinous themes. The listeners fetishize these off-putting acts by the band. I wanted to be disillusioned from that internet obsession, to be free from the curiosity of their popularity. It didn’t exactly work. They know to maintain this enigma on stage. They come out–of course they don’t say a word to the packed crowd. There is a literal aura of solely white light as their backdrop which serves as the only lighting on the stage rendering all three of the members as silhouettes. They barely even seem to notice they were on stage. The audience haunted them. Throughout the set, Stefan Burnett, the vocalist, was vaguely yelling and pointing in the direction above the crowd. His arms were always up with an elbow at angle to hold the mic. Zac Hill, the drummer, doesn’t look up from the barebones kit once. While he is playing, he is fluid. He has this over-exaggeration to his drumming that doesn’t quite match the jarring hits. Flatlander, the producer, had a robotic demeanor about him, flipping his head right and left in time. The production board he was using could have been a line up of knobs in a boiler room. Like a machine, the music didn’t stop once it had started. Well, Stefan did drop a verse on “Guillotine,” so they are human after all.

With that all said, my experience seeing them wasn’t all that different than listening to them in my car loudly. It was just as mechanistic. There was no dynamism between the artists and the crowd. I do not regret seeing them by any means but to me, they seemed out of place in an otherwise interactive festival. While they are a somewhat big name act they had no real stage presence. They were cloaked in the shadow of the persistent white screen the whole performance. I could not see what I had listened to so many times before and what other reason was there to go to a festival than witness a lively act. I was not, per se, underwhelmed (I was very adequately whelmed) to see their performance but it made me realize that the mystique truly is something that they purposefully play up. Even experimental groups can be kind of gimmicky. Nonetheless, it was exhilarating to be part of the brutal crowd and to witness a near flawless set of obfuscating music I love. -CT

My experience with Gaika is an odd one. Afropunk placed “smaller” acts on the red stage, quite a ways away from the bombast of the green stage, where the more famous acts were. I was just checking out the space when I heard Gaika’s set off in the distance. His smooth, melodic humming brought to mind a more conscious Kid Cudi. Performing songs off his latest release, Basic Volume, listening to Gaika live felt like falling into a trance. There were plenty of onstage antics, but the man’s voice basically took me off this planet. -KH

If Benjamin Booker was the calm, N.E.R.D was the storm. One of the biggest artists to play Afropunk this year, N.E.R.D got the crowd lit one last time before sending us home. Playing songs from every era of their career, from “Spaz” off of Seeing Sounds, to “Run to the Sun” off of In Search Of…, N.E.R.D proved without a doubt that legends never die–they just take longer hiatuses. The chaos of N.E.R.D’s eclectic beats combined with the frenzied crowd moshing and crowd-surfing over each other (at Pharrell’s insistence) made for an unforgettable time. This was the group’s last tour stop of the year and it was definitely a trip. -KH

The Internet had an obvious fanbase in Atlanta. They were by far one of the most attended shows. The crowd had an instant reaction to Syd, the lead singer, when she walked out. She praised the crowd, enjoying the “beautiful faces” that looked back at her. The group had the crowd in sway almost like no other performer. The groove was infectious; everyone had their hands up. Syd had a collected demeanor on stage with subtle but sensual movements while singing laid-back love tracks. It was extremely soulful. The genre term neo-soul is often used to describe them and while this label is not exact, it fits perfect with the lush secular vocals, R&B cadence, and upgraded keyboard harmonies.

When The Internet entered the stage, Syd told the crowd she always felt at home in Atlanta given that it was the hometown of Matt Martians, the keys player, and that the Atlanta LGBTQ scene is so strong. The audience cheered to that. Atlanta Pride had happened the day before they performed so Syd made a comment on how welcomed she felt in Atlanta as a gay woman. There was a deep connection between the band and the people they were performing for. This connection wasn’t just on the level of the music but it genuinely seemed to resonate in the identity of the crowd. It is in the spirit of AfroPunk to bring together the margins of society at all types and put on a wonderful display of art, Syd on the mic was a voice for that. Martians echoed the collective feeling when said that he “is just one of the rest of the festival goers and as excited to play for everyone as to be there being a part of it.” -CT