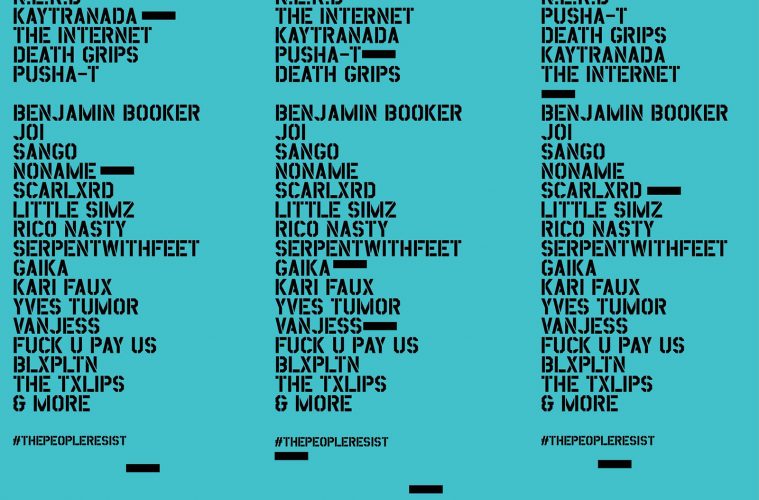 Afropunk’s Carnival of Consciousness returns to Atlanta this weekend, packed to the brim with iconic artists and those that will be. Along with fan favorite retours like Death Grips and Pusha T, there are quite a few rising faces and sounds that demark 2018’s cultural landscape. The Georgia music scene is already all abuzz, hyped for the massive energy Afropunk always brings.

Here are some of the artists WUOG’s media correspondents are most looking forward to seeing this year!

Definitely a man out of time, Benjamin Booker’s bluesy sound and churning guitar place him, sound-wise, more among the ranks of Jimi Hendrix and the guitar maestros of the ‘70s. He flies between a country lean, to a grunge vibe, to a jazzy tone almost effortlessly, going wherever the guitar’s instrumental history seems to take him. Benjamin Booker is definitely a recent favorite of mine, but a favorite nonetheless. His live show is one I’m hoping will be a highlight of the weekend. -Kiara Halls

Gaika is a stand out in this afro-’punk’ genre space with an R&B turn. A synecdoche of alternative London sound, Gaika installs an intersecting plane of internet imagery with political overtones. The song titles like “Immigrant Sons” and “Warlord Shoes” reference a post-colonial mentality and are synchronized with explosive club-steppers like the militant “Battalion.” These seem to be nods to the imperial history of his home. Come to hear Gaika with a grime-drawn accent on bass-armed beats. -Chris Tidwell

Scarlxord is next up in my recommendations for the “punk” part of AfroPunk.  The England native shows this punk darkness, like Gaika, but with a trap flare. Some comparison could be made to XXX Tentacion in the U.S., but Scarlxrd had this sound before it was jacked along with many other industrial acts. The black surgical masked bape-donned scream rapper maximalizes production a la $uicideboy$, D.G, Syringe, Soundcloud hip-hop etc. Who knows what exactly to call this phenom in hip hop yet. It’s beyond trap, it’s screamo, it’s goth, it’s bleak. This holds a political weight in its rejection of sonic norms. Push counter culture’s counter and it becomes almost unlistenable. Almost. Yell against the mechanized prod board. His set should be invigorating. -CT

Noname is hands down one of the best female artists out there. Period. From her features on Chance the Rapper tracks, to her earth-shattering debut Telefone, Noname has been a favorite of mine since “Gypsy” was still her last name. A soulful, vulnerable act with just enough hip-hop, jazz, and R&B to make her indescribable, Noname is a definite can’t-miss. -KH

One of the biggest acts to grace the stage at this year’s festival, I only recently—like, very recently—got into The Internet’s music. And, I have to say, I’m glad I did. Their catchy, dreamy brand of modern jazz, full of stories of loves held and lost, consistently fills me with a peace I can hardly understand. A six-man band, hearing them live for the first time should prove interesting, as their recorded sound is notably electric. I look forward to whatever surprises they might have in store but experiencing their cool sound firsthand is treat enough. -KH

With a grand total of five songs on Spotify, The Txlips (pronounced “Tulips”) Band is the very definition of “emerging artists.” Their sound is grungy and full of edge—a full on punk act, something of a rarity in the Black community, music-wise. Afropunk was created to showcase artists like The Txlips Band: young and brash and working in the margins, but still having a community at this festival, among others like them.

Side note: their official promo photo on Afropunk.com shows them on the balcony of Bizarro-Wuxtry Comics downtown, which is how they caught my eye. -KH

If a group like The Txlips Band is rare in Black music, then The 1865 might as well be a unicorn. The prog-rock group named after the year the Civil War ended and the New Jim Crow began has no presence on Spotify, Bandcamp, Soundcloud, or social media. The only way I could ever find to listen to their music was from video taken at AF Punk Brooklyn last year. Having said that, their intricate guitar-work and message-laden lyricism sounded great even on those cell phone videos, so I’m excited to hear what they sound like in person. -KH

Across all genres of the festival holds a truth to create a space, create a celebration for those of similar complexion. This statement also will be manifest in the Activism Row that will be present to portray the current relation of those who are disenfranchised and the policy of a Trump administration. Discussions around race and modern politics will take place in the music and literally in the streets of the festival. Atlanta has always been a great nurturer of this discourse. I wouldn’t be surprised to see Stacey Abrams swag abound. This is the only festival I know of where the black community will be given the pedestal to speak out-right and show off the culturally meteoric impact on music it has had. For those interested in the cross-section of politics and aesthetics, I cannot think of a more powerful happening. -CT