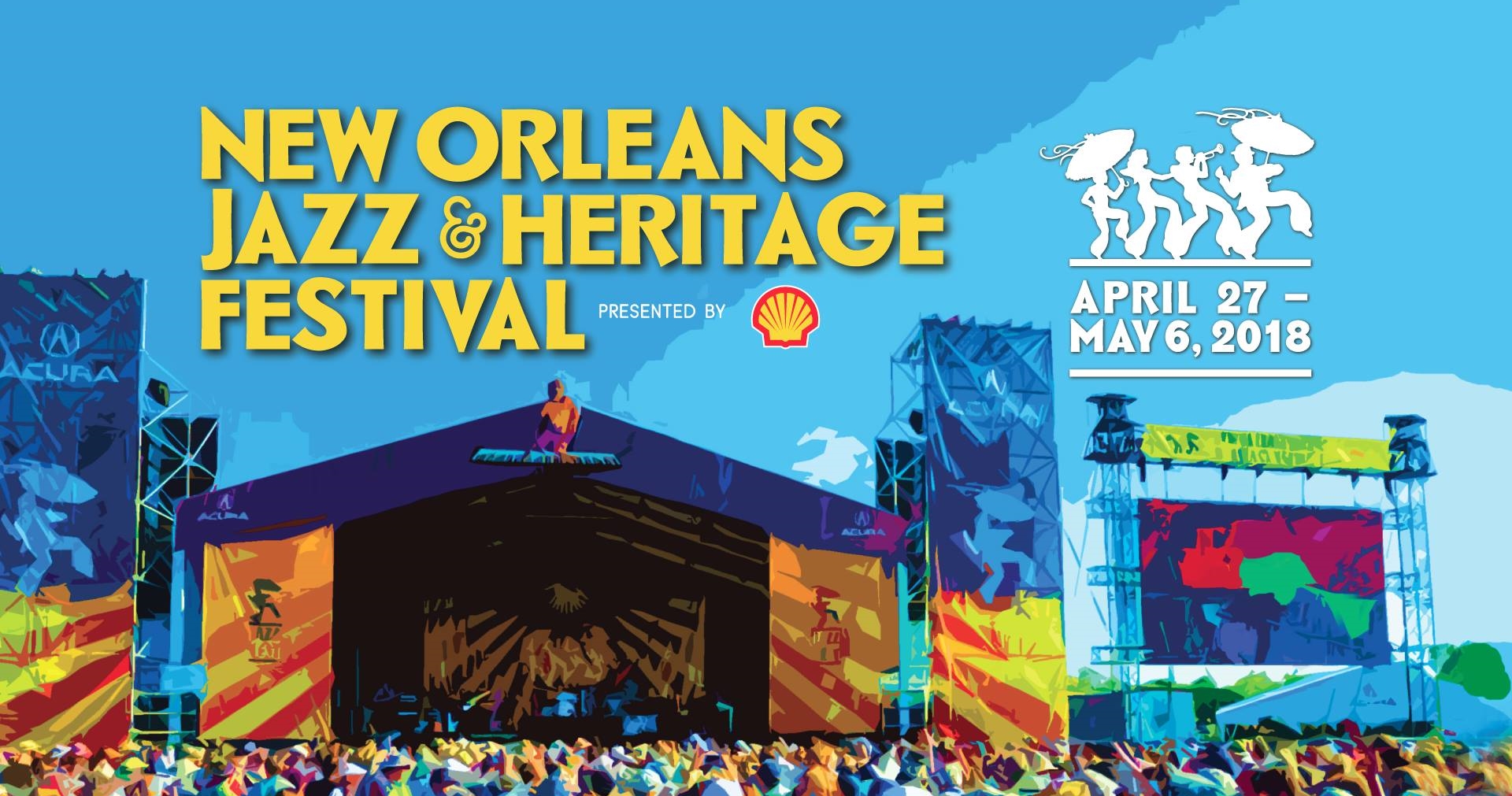 I have wanted to go to The New Orleans Jazz and Heritage Festival for a while and this year I final had the experience in the flesh with Sam Fisher. As it goes, it was hot, packed, and full of life. The show didn’t just take place in the theaters or tents but in the in between time. Like other festivals it was a pop-up city with its own world. There was music during the runs to get the strawberry iced tea or fried green tomatoes. The food was great. There were brass bands like Sons of Jazz and Rebirth making second lines in the dirt pathways. The people of the constant rush hour roads would part the sea bringing the parades of the head-to-toe feathered Mari Gras Indians or the suave Men and Lady Buck Jumpers. It was exhilarating.

This seems to be the reason behind the ‘heritage’ in the title of the festival. In the periphery of the theaters there was celebration of New Orleans culture, style, and history. There were non-musical tents with historical seminars covering a breadth of New Orleans heritage all the way back to indigenous peoples. This was represented by a visual timeline in the Cultural Exchange Pavilion. I discovered that New Orleans has connections to not just French but Irish, Italian, Hispanic, and German. Inside the Pavilion, festival-goers learned to make Isleños Teneriffe lace, Italian kissing canes, and Mexican sugar skulls. Given the geography the port city and this new information, it only makes sense to see how cosmopolitan New Orleans was an still is. It truly has the famed American ideal of a cultural melting pot. All of this cultural remembrance was especially important given the celebration of New Orleans tri-centennial this year.

Unknown to me before Jazz Fest, Joe Dyson played an amazing set as a first-time leader. He was on drum kit with a combo instrumentation of bass, piano, trumpet, and saxophone. They played impressive unheard originals like “Look Within,” “Naysayers,” and “Forever Changing.” In research after the festival I found that Dyson has appeared on 22 albums. This intense amount of productivity will prove him to be a big name in the future. Having been described as a rising star, he has played with the A-list of artists in his field. He has the blessings of people like Lonnie Liston Smith, Christian Scott aTunde Adjuah, and Nicholas Peyton.

Unlike other Jazz tent shows, Dyson had a smaller crowd who all seemed soldered to their seats. Dyson played a shimmering groove, proving his knack for the sensuality of the drums. The cymbals are his primary colors and shades delineated by snare and tom taps. His colleagues installed decorated solos with challenging harmonies. The technique of every player was immaculate. Flourished runs with drummed adlibs exalted.

The most unique thing Dyson incorporated were his drum pad samples. These samples were played at calmer times within the music colliding spoken word with the meditative parts of the tunes. These were pensive and cymbal drenched modes harkening to a freer style of improv. This cements him in modernity to me. With bold lemmata like the drum pad being incorporated into the jazz lexicon how could one claim the death of this music? Dyson takes on the spirit of jazz in a new and exciting way.

There was a 30-40 mintue gap between the Jr. and the other, elder, Jr. show in the Jazz tent. This was a transfer from young to old. While Joe Dyson represents the youthful front of jazz today, Ellis Marsalis represents an old guard. Back in Ellis’s day he played with acts like Cannonball Adderley who worked to push the genre forward. Today Ellis still plays with that youthful spark on classic tunes and compositions of his own. He acts as an inspiration to the new players of a continuing evolving genre. The keyboardist from Joe Dyson’s combo was looking onto the stage from the exit stairwell the whole set Marsalis played. This was a great imagery of passing the torch from on generation to the next. That is why I think Ellis likes playing jazz fest so much: it has this coagulating effect of the new and old jazz sound.

Of course, Ellis shined in solos and his combo were on lock with their mentor. Every player was undoubtable masters. With the progress of jazz there will always be a sort of madness in search of perfection towards the better, more complex chords and harmonies. Ellis combo embodies this pursuit of incredible facility, yet they also have a great deal of harkening back to the dirty New Orleans sound. We may all learn from Marsalis ability to bridge the aged and youth. The music is not reactionary. Marsalis’s combo is not just a departure from Dixieland, bebop, or postbop: it is this temporal swirl of a player who lived through some of the golden ages of progressing music. He plays this blue note, a seemingly unprompted step, a leap in his transfer of his knowledge to his students and students of the festival. Even as the titan that he is, he remains humble. He walks on the stage, greets the crowd, and plays a dissonant chord. The concert begins. The blues resonates from his character.

Though the Jazz Fest can draw in very popular artists that may come off as bands that one might not expect to see here, Jack White and Beck to name some, there remain scores of bands, performances, and showings that can be found nowhere else but in New Orleans. In fact, my most memorable moment of the festival occurred after I had left the Jack White show for one last promenade around the grounds. Walking across the pedestrian-highway of the fairgrounds, I was passed by a Mardi Gras Indian tribe parading out of the Festival. I do not remember what tribe this was, but they had adorned costumes, banging drums, and their own brass band to dance their way out of the festival. Following this parade for a little, I came to see a brass band performing the funeral march dirge on a stage. This was pretty powerful to me, though it wasn’t an actual funeral ceremony: they had a member of the band, the Kinfolk Brass Band, strutting slowly, paying homage to the fabled fallen one, on the front of the stage. His presence made one think of the fallen, of the lost family, friends, and everything else that the funeral march mourns. Then, the celebratory “Oh Didn’t He Ramble,” and bittersweet dancing came about to celebrate life, the upbeat ending after the funeral dirge to celebrate new beginnings after death.

After seeing the Kinfolk Brass Band, I went to the Folk Village to see the final Native Nations Intertribal Pow Wow. Sitting in an unusual shady respite waiting for the performance, I could clearly see and hear Jefferey Broussard and the Creole Cowboys playing at the neighboring Fais Do-Do stage. The person leading the Intertribal dancing was drowned-out on the microphone by this neighboring Creole Cowboy band, and immediately after the band finished its set, only then did the performance begin. I had some strange feeling of being between the Creole Cowboy performance and the Native Nations Intertribal dance and observing the conflicting sounds and time schedules. Yet, the transition was smooth and respectful.

The performance itself was informative, interactive, and even young children lightened up upon seeing such a dance accompanied by drums and chanting. There were about ten dancers in total from around the US including two from native tribes in Louisiana, Dakota, Aztec, and even a dancer from Alaska. This was the last stop, the Jazz Fest, in a sort of country-tour of dancing competitions by this group of dancers. Each participant was donned in ornate, homemade costumes, notably the Aztec woman dancer had over 200 dip cans bent and shining which produced a rhythmic jingle as she danced. The rule of the dance is that if any piece of the dancer’s costume comes off, then they are eliminated. There were numerous varieties of dance: solo performances, group dances, a rooster-hen dance, a healing dance, and more.

This final promenade was me saying goodbye to the Jazz Fest, and during this salutation I saw an embodiment of New Orleans itself: brass bands, funeral marches, neighborhood groups, Native Nations, Creole-zydeco rockers, and all of these somehow mixing in a co-existent, respectful way. The Jazz & Heritage Fest is a festival that I feel really is a New Orleans festival. Food there is New Orleans food: beignets, crawfish pies, red beans, even West African food. The cultural learning areas are notable too: there was a Native American tent learning center, a Louisiana crafts tent complex, an African art area near the Congo Stage, a tent commemorating the 300th anniversary of New Orleans, and even a New Orleans circus troop tent which had daily circus performances. Essentially, the Jazz and Heritage Fest goes beyond musical performances which one expects from any big music festival now. Even with the performances, the Fest includes small New Orleans bands who otherwise would not be on such a big stage. But, the festival is great in its presentation of the New Orleans spirit through its music, its dance, its food, and its people.