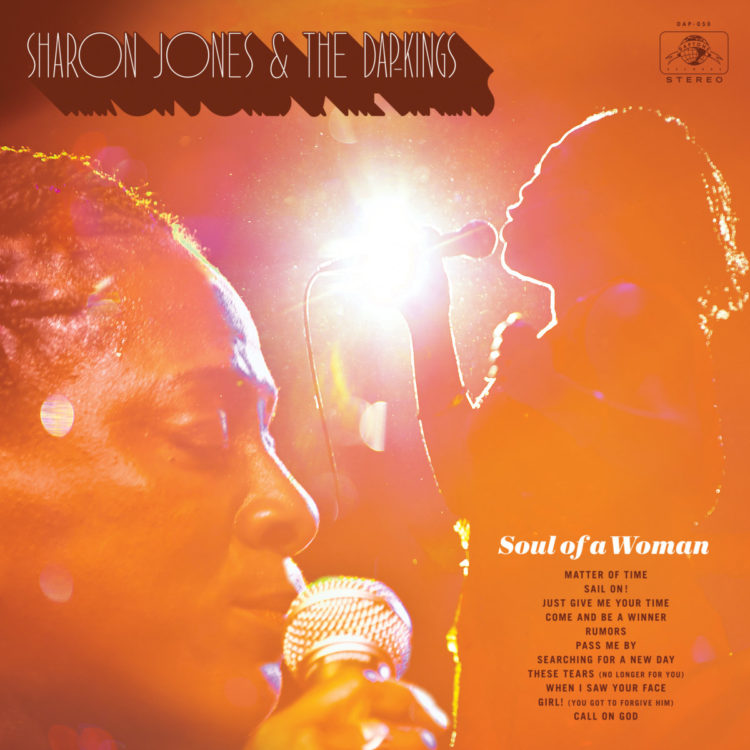 Looking to feel empowered this week? Look no further than Sharon Jones and the Dap-King’s final release, Soul of a Woman. This album perfectly embodies the late singer’s spirit, persistence, and power. Common themes of Sharon Jones’ music include, justice, freedom, and and power, topics she is certainly qualified to speak on. Sharon Jones had been singing since childhood, working with gospel choirs and wedding bands throughout the ‘70s. She dealt with years of rejection before finally recording her debut album, Dap Dippin’ with Sharon Jones and the Dap Kings in 2002. In the documentary, Miss Sharon Jones! she describes a record producer saying she was “too fat, too black, too short, and too old” to be in music. Despite the racism, sexism, and ageism of the music industry, Jones knew her worth and talent and at the age of 40 released her first single, “Damn, It’s Hot.” Listening to Jones’ music, one wouldn’t guess it was all recorded in the ‘90s and 2000s; it mirrors ‘70s funk and soul and puts Jones in the same league as legends, like Sly and the Family Stones and James Brown.

Aside from proving her worth to the industry, Jones has shown her persistence and strength through the recording of Soul of a Woman. As she battled stage four pancreatic cancer, Jones wanted to record an album to leave as her final legacy. She was originally diagnosed with pancreatic cancer in 2013 and went through remission before the cancer came back in 2015. All the while she continued touring and making music. Between treatment, on her good days, Jones would go into the studio with the Dap Kings and lay down tracks for this album. One can imagine how bittersweet these days were. The album is a living piece of Sharon that reflects on her life and all thegood and bad that comes with it.

The album is packed with musical elements; funky bass lines, a powerful horn section, the pounding of cymbals. While I found myself impressed with the individual instruments, the focus of the album is really Sharon’s vocals. The opening track “Matter of Time,” is a great sample of all the album holds. It focuses on the idea of power with lyrics, such as “just a little bit of time until freedom will mean free” and “I’m talking about unity for all people.” Jones is optimistic for the future and you can’t help but sing along in agreement as she sings, “oh yeah, oh yeah.” Another song about hope for the future and a personal favorite of mine is “Searching for a New Day.” The song has a really full sound with guitars, horns, and back-up vocals. It is a reflection of our time, specifically the 2016 political climate. The album is full of life lessons. Tracks like “Just Give Me Your Time,” “Pass Me By,” and “Rumors” deal with relationships. Forgiveness is another issue we hear about in the track, “Girl! (You Got to Forgive Him).” Another favorite track of mine was “Come and Be a Winner,” a track I believe may be about Jones’ battle with cancer and the support she felt around her. Its meaning can easily be conveyed in the lyrics “People will treat you like a worn out shoe, but they don’t know that you can’t lose.” The final track, “Call on God” is greatly personal and spiritual. Musically, it sounds like a gospel hymn. It is slow and simple and tells how Jones has felt throughout her life, but especially at the end of it, throughout treatment. It is a comforting prayer to God, almost saying I’m ready to come home because I know you’re with me. The track gives the album closure and gives the listeners peace in where Jones sees herself. This is Sharon Jones’ legacy; she was a powerful fighter and a gifted musician. This album is a beautiful reflection of life; it is happy, powerful, supportive, faithful, heartbreaking, and hopeful. Listeners will enjoy its musical variety and its lyrical reminder to keep fighting through life’s ups and downs.