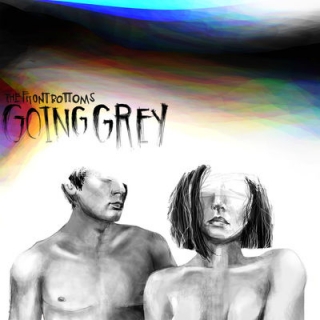 Let’s cut straight to the obvious: Going Grey is The Front Bottoms’ second album with Fueled By Ramen, and it’s starting to sound like it. This is not the DIY, attic-recording folk-pop-punk duo of yesteryear. But fear ye not, sad punk kids! Sure, Going Grey sounds way more like Twenty One Pilots than they ever did AJJ, but that’s not inherently a bad thing. Learn to love the sheen.

One of the benefits of a bigger label is a much higher production value; Going Grey is the most polished offering The Front Bottoms have ever produced, and features lead singer Brian Sella’s best vocal performances by far. He still sounds a little like Tom Delonge with a cold, but the range he displays in “Don’t Fill Up On Chips” and “Raining” is impressive. The frantic acoustic arrangements of their first few releases are largely absent here, substituted with pleasantly laid back electric tones: album highlights like the upbeat “Vacation Town” and mid-tempo “Grand Finale” both feature prominent use of overdubbed sampled drums, and dreamy opener “You Used To Say” is swaddled in gentle synth. Likewise, “Trampoline” bobs along atop a cutesy keyboard line, and the aforementioned “Don’t Fill Up” sways along with a breezy, relaxed chorus. Their signature sound still shines through, though. “Raining” and “Far Drive” both recall the acoustic guitar-driven arrangements of Talon of the Hawk and their much beloved self-titled album, and “Bae” retains the lovably awkward lyricism of past releases – in true Front Bottoms fashion, zany lyrical nuggets are still tucked all around the album, presented in a stream-of-consciousness fashion that sometimes borders on cringe-worthy, but somehow manages to still make you smile, though the emotional gut punch of fan favorites like “Twin Size Mattress” and “Swimming Pool” is absent.

Going Grey’s chilled out indie pop aesthetic is a bit perplexing, but the band’s off-kilter personality still shines through. The Front Bottoms have made an enjoyable indie-pop (sort-of-punk) album, and while they’re still having fun, I am too.