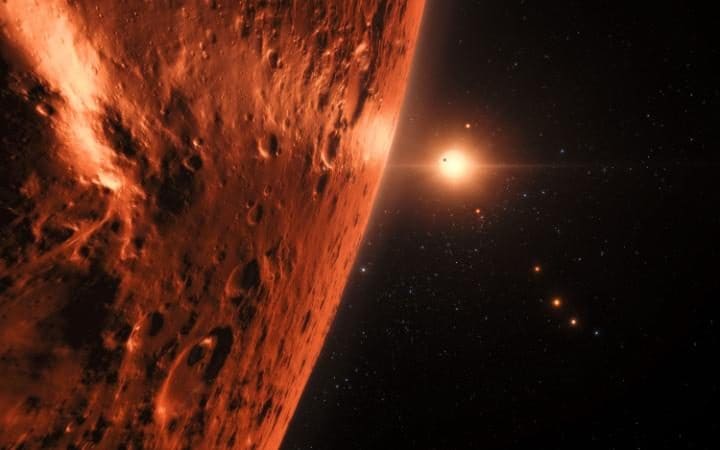 On Feb. 22nd, NASA revealed to have found the first system of seven Earth-sized planets around one, single star. These planets are said to be located in a “habitable zone”, in which the area surrounding the star and three of its planets most likely have liquid water.

This discovery not only set a record for the largest number of habitable-zone planets found near a single star beyond our solar system, but shows what we have always known-we may not be alone.

Firstly, the habitability discovered on these planets is another addition to previously noted characteristics of planets that shows signs for containing life.

NASA noted in the early 2000’s the four most common elements across the universe are hydrogen, helium, carbon and oxygen- three of which are the top elements that deduct life on earth.

Because they are so abundant, it shouldn’t be difficult to find a combination of these ingredients that can constitute a habitable atmosphere. Normal ozone, however, doesn’t even have to be a condition to hold life.

NASA also uncovered in 2014 that both molecular oxygen as well as general ozone, the main components of Earth’s atmosphere, could be made without the same processes that occur on our planet. Ultraviolet light has the ability to break apart carbon dioxide, a non-biological process that in turn creates enough ozone for it to be found across space, so the detection of ozone alone would not be a definitive indication of life.

The recent discovery of the groundbreaking system, referred to as TRAPPIST-1, is being further observed for atmospheric indication of life capability, but two of the planets have already been determined to not be covered with puffy-esque hydrogen atmospheres, but rather be rocky in nature like Earth.

In addition to atmospheric requirements for life, TRAPPIST-1 mirrors a location that Earth is in right now, referred to as a “Goldilocks Zone”. This stipulates a planet is in the perfect distance from its star-neither too hot, nor too cold to support liquid water, further demonstrating the infinite universe has planets with ideal abilities to support life.

Secondly, NASA recently launched a new method for detecting life on other, ocean-like planets in Jan. 2017.

The simple chemistry test involves shining a laser across a mixture of a liquid sample and a liquid reagent in order to separate and observe specific molecules moving at different speeds for easy detection of amino acids.

The isolation of amino acids serves as a way to differentiate between living and nonliving beings on these ocean-like planets, thereby being able to portray key signs of life.

Why would this administration continuously strive to achieve these methods of analysis or contain so many forms of analysis groups if they didn’t have some form of suspicion or confirmation that alien life truly was out there?

While this discovery is noted as one of the “best opportunities” and the “best target yet for studying the atmospheres of potentially habitable, Earth-sized worlds”, it incites an entirely new array of questions for astronomers and the general public alike.

Nonetheless, as these revelations proceed throughout history, the genre of sci-fi appears to become less of “fiction”.