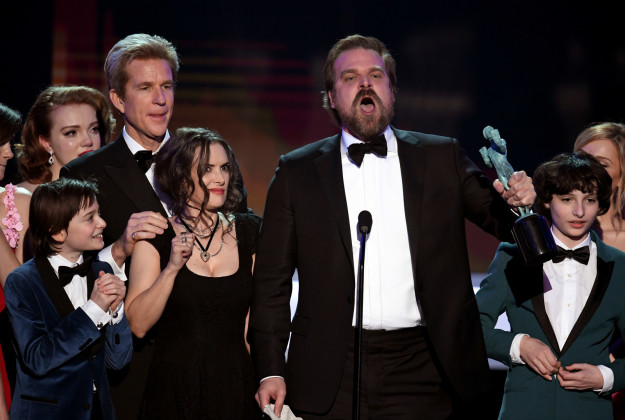 With the Oscars coming up on Sunday, many are wondering what political statements will be made and who will make them. There is, however, little wonder on whether politics will be brought up from the stage of the Dolby Theater in Hollywood, California. If we have learned anything from the other ceremonies this award season, politics and the future of this great nation are on the minds of all people, even celebrities. From Meryl Streep criticizing Trump’s bullying nature at the Golden Globes to David Harbour, the sheriff from “Stranger Things”, doing little more than ranting at the Screen Actors Guild Awards, celebrities are making their political opinions center stage.

With all the flurry of Trump’s tweets attacking the legendary Streep and the memes of Winona Ryder’s reactions to Harbour’s speech , people are also feeling very opinionated about the whole situation. It’s not as much the statements themselves being made, but rather, who the statements are coming from that is causing such a reaction. Many believe celebrities are too far removed from the real world of ordinary people, that they should keep their mouths shut when it comes to politics. This whole concept is actually kind of scary, if you think about it, because people are basically saying that the celebrities’ status exempts them from being able to voice a political opinion.

Celebrities, for the most part, boast the cliché phrase “We’re just like normal people!” This is their go to phrase when photographed by invasive paparazzi in sweats and no make-up walking to their mailbox in the morning. However, this phrase can be applied to far more than just unflattering photographs.

They are people with thoughts and ideas and yes, opinions about politics. No matter the status, many devote a lot of time and money to nonprofits and promote good causes when in front of the camera. We praise them for it, but as soon as they have an opinion and decide to voice it, people become outraged. It seems like a lose-lose situation. When celebrities voice their opinions, they become attacked for thinking they know anything about the real world to have an educated opinion, but when they decide to not speak, they become criticized for not using their status to have a platform.

In the end, celebrities are never going to make everyone happy. At some point in their career, they will do something to make someone mad. Whether that be claiming to be a feminist but not doing “enough” for the movement i.e. Taylor Swift and the Women’s March, or deciding to be neutral in the public eye and getting backlash for it.

All in all, celebrities deserve the same respect we would offer anyone when voicing their political opinions. Their status does not disqualify them from being educated citizens that have a political opinion. Whether it’s standing on stage and voicing that opinion during an acceptance speech or a long post on Facebook from that weird uncle you always avoid at reunions, all of us have opinions. People are going to voice them, and as a nation that still claims to believe in the freedom of expression, we should stop criticizing those who wish to share them, regardless of social status.