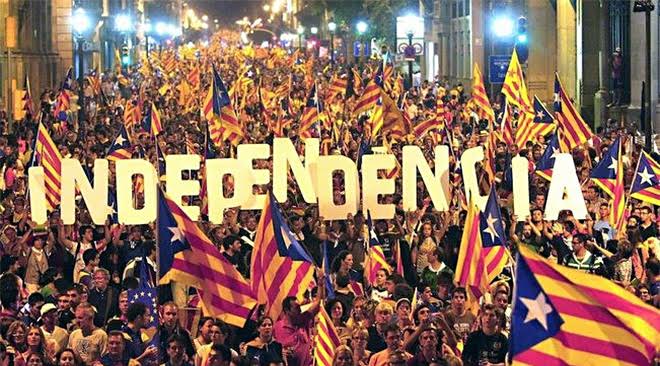 Would Independence From Spain Benefit Catalonia?

November 7, 2016
Op-Ed
While our presidential election has perhaps rightfully so overshadowed everything else happening in the world, we should take a step back for a second and examine an issue that has become much hotter over the past month: Catalonia’s hypothetical independence from Spain. Last month, the region decided that it would hold a referendum with or without Spanish consent, and as recently as October 20, a conflict arose again when Spanish courts overturned the Catalan state’s ban on bullfighting.
To provide the world’s smallest piece of historical context, Catalonia has historically been very different culturally, as well as linguistically speaking, from the rest of Spain. The region faced brutal repression during Francisco Franco’s dictatorship from the late 30s through the early 80s, and the continuing conflict between Catalan laws and customs has sparked a newfound desire for independence; especially given the struggles that Spain has faced economically in the past decade. Catalonia is one of the wealthiest regions in Spain, consisting of the entire northeast corner of the country, including legendary cities such as Barcelona. I encourage you to read up more on this, because I believe that this issue, along with Scottish independence, will become the pressing questions facing Europe before 2020.
So here’s the million dollar question:
Would independence from Spain benefit Catalonia?
I would be inclined to argue no.
While it is true that Catalonia is a huge tax base for Spain and pays into the national government more than it receives, it is not that simple.
One also needs to consider the very real challenges of forming a new nation; such as debt, running a functional economy, finding a new currency, or forming supranational bonds that often separate a successful country from one that constantly struggles. Catalonia would probably fail at all of these.
One of the most important aspects you have to look at it was would happen to Catalonia’s debt. Catalonia actually has one of the highest debts of any Spanish state, and at the present the percentage of Spanish debt that Catalonia is responsible for is actually higher than the proportion of Spanish revenue that Catalonia contributes. You then have to consider the fact that a mass exodus of Spanish companies, as well as other corporations generally, in the event of Catalan independence would further weaken the state’s economy. Soon you’d have a nation saddled and crushed by debt in a similar manner to Italy, Greece, Ireland, or ironically, Spain. This is partially linked to the business exodus I mentioned but also due to another: Catalonia does not have the geographic makings of a strong economy. It lacks any real natural resources to trade and is not in a particularly valuable crossroad for trade.
I think that Catalonia would soon devolve into a country overly reliant on tourism just like Greece, a country that is not exactly loved by its European neighbors at this point. Thirdly, the Catalans have no currency whatsoever that they could utilize to create an economy, which is a death blow within itself. They would not be able to use the Euro because Spain (and possibly others, such as Belgium and Italy, who don’t want to set examples for the independence movements within their own countries) would veto it’s entrance. To make matters worse, the Catalans have never had their own nation in modern times, so there is no currency for them to go back to like the Greek Drachma or French Franc.
At least with the Drachma, financiers would have some idea of what it would be worth based off of its last point in history and after factoring in inflation. It’s only been a few decades since the Drachma was switched for the Euro.
If you invent a new currency like the Catalans would be forced to, you would have a whole new battle of figuring out what it could possibly be worth for exchange purposes. The rate would fluctuate wildly at first and most likely ruin the only industry that I think the Catalans would be assured of: tourism. You also then have a challenge in the fact that some nations will take longer than others to accept the new currency and the questions of what to do with all the Euros that your citizens have that used to hold value in Catalan territory. All the while, financial markets would suffer because they hate uncertainty. Uncertainty hurts investors and stifles development as a whole, and a Catalan independence, just like Brexit, would create a huge amount of uncertainty.
Another obvious struggle that I mentioned earlier,  but would like to elaborate on now, is the fact that Catalonia would be hard pressed to join the European Union, or for that matter any supranational organization that would be applicable for Catalonia. Spain would undoubtedly oppose a Catalan entrance into the EU which would stifle most trade potential, and I imagine the same would occur in most other organizations because Spain and Catalonia have similar qualities and would likely belong to the same supranational organizations. There are very few countries that are consistently successful and are not part of a special economic zone or trade organization.
In the age of a global and interconnected economy, we can’t afford to make more weak states out of states that still have the potential to function properly. The old kingdoms of Spain have stuck it out for almost 600 years at this point, and I think it would hurt all of us if they stopped doing so now.
-Alex Vanden Heuvel
@TheVandenHeuvel