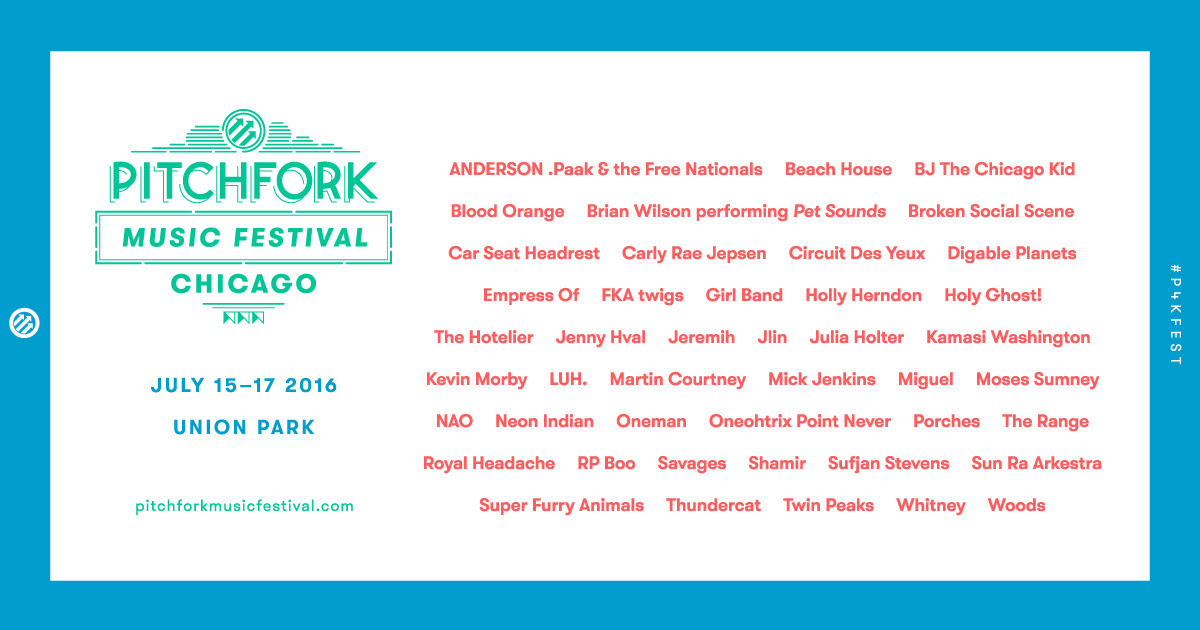 I was standing in a hall of mirrors on the Navy Pier when a teary, 6 year old me swore that she would never go back to Chicago. A good-natured funhouse excursion scared the living daylights out of me, and I haven’t been back since. A few months ago, right as I booked my flight info to the windy city, that memory seeped into my mind. I hesitated, but laughed. With a quick click on the confirmation button, I sacrificed my childhood vendetta to the gods of music journalism. This weekend, I will happily be returning to Chicago for 30 hours of genre-spanning musical glory at Pitchfork’s 2016 music festival.

The lineup for this year’s 11th installation of the Chicago fest is full of diverse acts and this year’s hottest buzzbands (you can check out Pitchfork’s “By the Numbers” report for specifics ranging from the age gap of performers to how much beer they expect people to consume at the festival). From established artists like Brian Wilson to bands like Whitney and LUH, whose long-anticipated debuts blew critics away, this motley crew of the year’s biggest acts is a college radio music director’s sweet fantasy.

Here are some of the bands I’m looking forward to most:

This summer, I drove to Charleston and listened to Car Seat Headrest’s May 2016 release, Teens of Denial, over and over again until I could sing along to every line of frontman Will Toledo’s meandering lyrical vignettes. Car seat Headrest proves that indie rock can still be just as interesting with their vibrant guitar and catchy choruses.

To be only 21 and have one of the best dance-pop albums of the decade is a crazy feat. Shamir’s 2015 release Ratchet embraces theweird during danceable R&B inspired grooves, and his falsetto sass set to electro-bass and synth percussion fuse seamlessly to create an honest record for our generation.

2015 was blessed with two Beach House albums and both have the musical prowess to stand alone as separate releases. Legrand’s airy vocals, lush synths, and bright guitar create a hazy mixture of nostalgia and emotion. I saw them last year in a small venue where their light show really shined against the music, and I am excited to experience their performance in a festival setting.

Saturday’s lineup starts with industrial post-punk outfit Girl Band. With shrill guitars and screaming vocals, their music is explosive and full of violent noise. Holding Hands With Jamie is dynamically dark and unnerving, but the controlled madness is part of the exhilarating appeal.

Their second and final album, Blowout Comb, was released in 1994, and ever since, Digable Planets have been regarded as hip-hip royals. Their fusion of jazz and hip-hop set a standard that influenced similar laid back grooves in the decades after. Although their reunion is recent, Ishmael Butler won’t be unfamiliar with performing because of his work with Shabazz Palaces. Digable Planets’s nostalgic sound is just as organic as ever.

Performing the Beach Boys’s most notable album on Saturday night is founding member, Brian Wilson. I think it’ll be an interesting contrast to experience the youthful melodies against the aging 74 year old Wilson. The set time lines up with the sunset, and I’m hoping for a throwback, shimmery performance.

Porches ditched their folk rock debut for youthful liquid synths on their newest album, and it’s one of my favorites of the year. Their experimental pop is hauntingly ominous. Seeing a live performance that will draw from both releases will create a diverse show that can draw in any music fan.

With appearances on albums from Kamasi Washington, Flying Lotus, and Kendrick Lamar and a diverse discography of futuristic funk, Thundercat’s show is destined for dynamic danceable grooves. 2015’s EP was full of intricate basslines smooth vocals, and I hope his live performance is just as hypnotising.