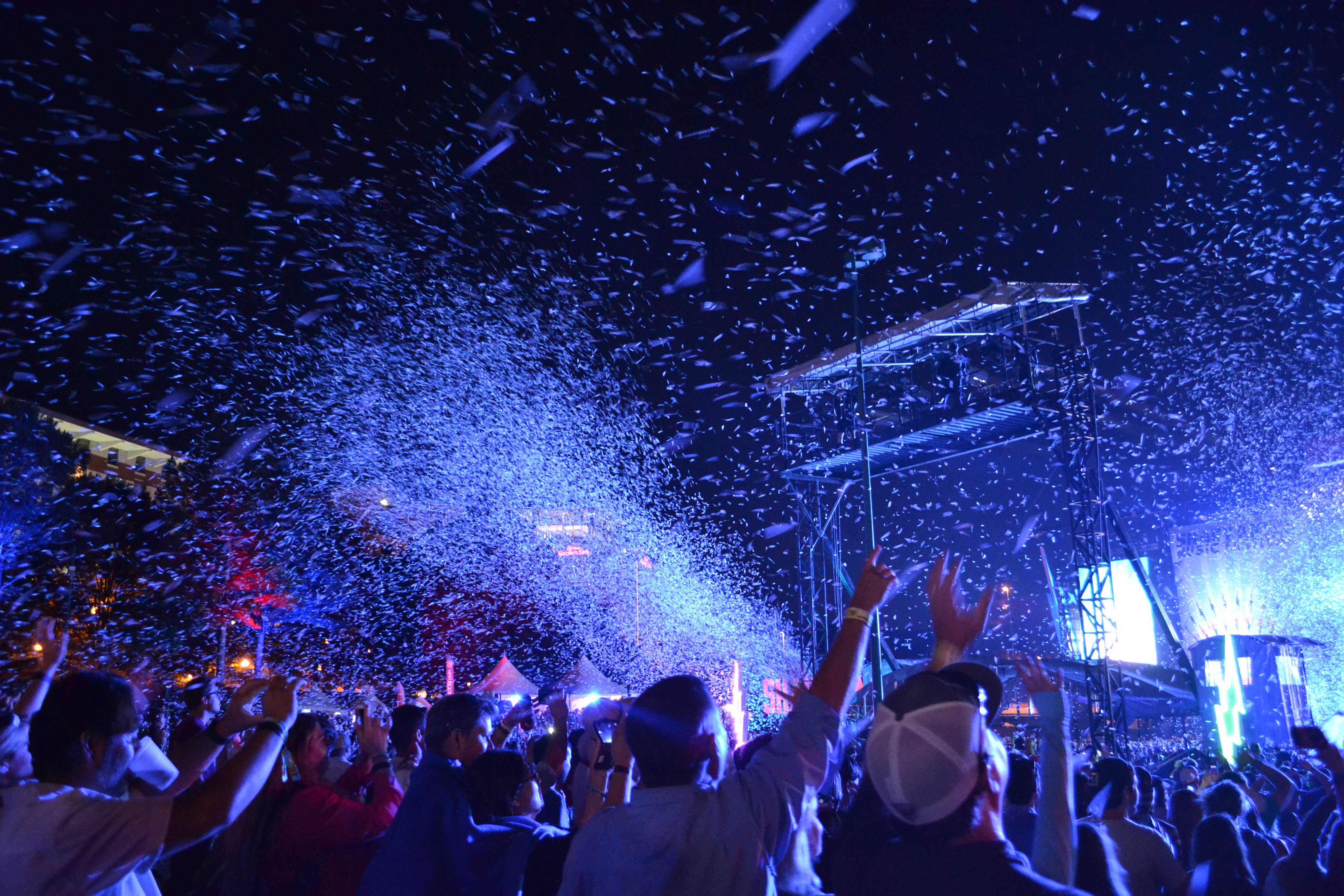 As the setting sun stained downtown Atlanta’s towering buildings a cotton candy pink, 40,000 people chatted happily over tunes and food trucks, and music rang throughout Centennial Olympic Park, Shaky Knees Music Festival sure did feel magical. In its fourth year, Tim Sweetwood’s brainchild of a festival morphed from a DIY up-and-comer to a seasoned leader in the professional music scene.

I’ll admit it, I wasn’t super excited the lineup for Shaky Knees. Its powerhouse lineup of buzzbands last year was replaced with festival regulars that would definitely bring in a more mainstream crowd. I was bummed at the lack of diversity in the lineup, for it featured mostly male-led rock bands and no local acts, and a lot of the smaller bands were regular visitors to the South. Even so, I saw some incredible talent throughout the weekend and really enjoyed the festival.

I started off my Shaky Knees experience with Friday’s early-day performer Foxing. Emo with exploding vocals, shiny guitar, and vulnerable lyricism, Foxing’s music was emotional and affecting even in a huge festival setting. The St. Louis five-piece was lead by Conor Murphy twirling and dancing to the rhythm. During “Raury” off of their 2014 release, Murphy pulled out a trumpet and added a triumphal feeling to his fragility.

The Front Bottoms played the Boulevard stage next, and their set was framed by their infamous inflatable tube dancers from their Talon of the Hawk tour. The crowd sang along to Brian Sella’s fast-paced, narrative lyrics, and their exuberance and angst took me straight back to high school.  With a leading acoustic guitar, two electric guitars, and a keyboard, The Front Bottoms fused pop-punk, emo, and folk into one catchy, honest performance.

I decided to catch Wolf Alice at the big Peachtree stage next. I hadn’t really heard much of their stuff before this performance, but their heavy guitar set to woozy female vocals created a pretty basic English alt-rock act. Lead singer Ellie Roswell would skillfully go from sweet whispers to exploding vocals. I liked how atmospheric their music felt, but the bass was so loud it was almost unbearable.

Alex G, one of the acts I was most excited to see at the festival, was next. He played his lo-fi indie-rock on the intimate Buford Highway stage, and his set consisted of audience favorites and rarely-played-live deep cuts like “Wicked Boy” from Rules and “Black Hair” from DSU.  He opened the set joking about how they were the best band ever and how it was so nice for Shaky Knees to throw a festival in their honor. That wit is all throughout Alex G’s lyrics, and each song has a moody tale of love and introspection. At times, Alex would burst with energy and scream vocals over the meandering strummed guitar. Those contrasting rhythms incorporated some of the more experimental aspects of his recorded music. It was definitely one of my favorite performances from the weekend.

While the sun went down on the first day of Shaky Knees, Slowdive played their sweet shoegaze to a huge crowd of excited fans. Everyone was in quiet reverie of the power of their music, and at one point I looked over and saw tears in fans’ eyes. It was extraordinarily ethereal, and their fuzzy distortion, droning vocals, and hypnotizing guitars set to flashing lights had the crowd in a dream-like trance. Vocalist, Rachel Goswell, dedicated the set to a deceased friend, and although she kept getting electrically shocked by her guitars, her vocals were seamless and emotionally authentic. They closed with a cover of “Golden Hair” by Syd Barrett, but the most affecting moment throughout was definitely “Souvlaki Space Station.”

Day two of Shaky Knees opened with Hop Along, and I managed to catch the ending of their set. Their sophomore release, Painted Shut, was critically praised as one of the best albums of 2015, and the Philly band spun out simple guitar chords to Frances Quinlan’s rich voice. Wish I could of  seen more of the set, but as they ended with their album closer “Sister Cities,” I was impressed with the effortless way Quinlan dove from note to raspy note.

Next I saw indie-rock newcomers, Day Wave. Led by Jackson Phillips and started as a DIY project, the band played their melancholy gloom-pop in their first festival performance as a full band. Dreamy, but catchy, their gauzy melodies had everyone in the crowd bopping their heads. The mix of synths and guitars came together best in their song, “Deadbeat Girl.” They even covered New Order’s “Ceremony” and gave their own fuzzy spin to the early 80s hit.

Shakey Graves was scheduled next, but when we arrived at the stage past when the show was supposed to start, the crowd was chanting his name impatiently. He emerged at last with a confused shrug saying that the power generator had gone out, and he wasn’t sure what to do next. Ten minutes passed, and as the crowd was starting to leave that stage, he came out clutching an acoustic guitar. With one finger to his mouth, he quieted the entire crowd and starting singing “Dearly Departed” at the top of his lungs. The crowd sang along to the hooks, and when he finished his dynamic fusion of rock, country, and soul, he went backstage to figure out the problem. Finally, the full band came out and in celebration, he smashed an electric guitar and threw it out to the crowd.

Wild Nothing played their dreamy shoegaze next. I wasn’t too impressed with their set, compared to the couple times I had seen them before, but to hear their new 2016 album, Life of Pause,  played live was an exciting treat.

We managed to run and catch the second half of folk-country rockers, Phosphorescent on the other side of the park. Matthew Houck sang each song with the sincerity and wail of a real rancher across the campfire, and he wandered around the stage on his more upbeat tunes from his 2013 release, Muchacho.

We saw The Decemberists next. With eight people onstage and a crowd full of die-hard fans, they had a pretty upbeat show. I have to admit that I left halfway through, but I thought that the lead singer’s energy mixed really well with the powerful vocals of the female background singers. Their established career and influence let them have a go-with-the-flow attitude about the show, and they relied on their music to propel the performance rather than any gimmicks or dancing.

I finished the night watching My Morning Jacket perform on the main Peachtree stage. Jim James is such a radiant personality, and even though we were in the back, they put on a great show for all parts of the park. There was a lot of dancing, and their jam band psych-rock was a great way to close the night.

My day three of Shaky Knees started off with Ought. I was really excited to see them perform because their 2014 album “More Than Any Other Day” graced my favorite albums of the year list. Two years later, with one more dynamic album under their belt, they are still fresh and exciting to the post-punk world. His stream-of-consciousness lyrics flowed throughout the performance, and watching their powerful buildups erupt into pure emotion was great in a live setting. Even though it was early, the crowd was really into the performance.

Next we saw Scottish rock band Frightened Rabbit. Their set consisted of mostly newer songs and cuts from their latest album Painting of a Panic Attack. The drummer was so into the performance and has his month wide open with intensity the entire set.

Parquet Courts played next at the Boulevard stage. I had seen them in Athens once before and the show was full of moshing and thrown elbows, so I was really hoping this festival performance would have the same energy. Unfortunately, it was more a bobbing your head show. They had played the night before at a late night venue, and I could tell they were kind of tired. Their set ran short, and they mostly played from their 2016 album. Andrew Savage’s passion is really infectious to watch though, and their off-beat stoner-rock was definitely worth seeing again.

I saw Nothing next at the intimate Buford Highway Stage. I was front row and was so glad I had earplugs because their set was a glorious explosion of sound. The droning guitar and heavy drums mixed with Nicky Palermo’s vocals made for a beautiful contrast of grit and emotion. Their show incorporated some of their metal background, but had really quiet moments during “Eaten by Worms” off their sophomore release Tired of Tomorrow. They even covered Radiohead’s “Creep” towards the end of the set and added their own grungy spin on the hit. This was my favorite show of the weekend.

My Shaky Knees experience ended with Explosions in the Sky. Their set time was early in the evening when everyone was winding down and the sun was setting. I sat on the grass and just took it all in. Their music feels larger than life, especially in a big festival scene, and I loved how their set list reflected an emotional journey. Each song builds from softer jamming to full eruptions of feeling. The Austin five piece’s behavior on stage reflected that build, for as the song would get louder and more complex, they would inch towards each other until they were all in one close knit circle. It felt like they were having a great time playing with each other and the audience was just a fly on the wall. It was a monumental end to an exciting weekend of music!