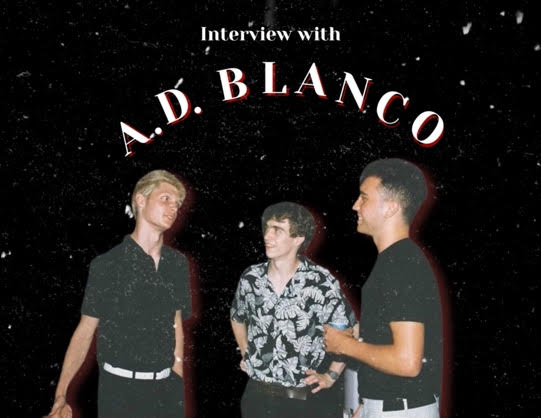 An Interview with A.D. Blanco

While it’s no question that Athens, Georgia is a unique haven for artists in the Southeast, the influence of the local music scene is much more than the bands that have made to the national stage. The artists and bands of Athens have built a web of role models, venues, and supporters that are hard to find elsewhere, and the members of the college rock band A.D. Blanco are no stranger to this.

“I think what’s valuable about Athens is, that as a young high school musician, you always have someone to look up to,” said Owen Lange, who plays bass for the band, “And I think that was pretty important for me, in terms of giving me confidence and secondhand experience for pursuing music myself.”

While the members of AD Blanco are originally from Watkinsville and Madison, Georgia, a lot of their musical influences and motivations have been focused around the Athens area.

“I spent a lot of time in Athens going to see shows at the Caledonia Lounge  and other intimate places where you’re close to the band, and that was huge for me. That made me really want to do music,” said Aaron White, who plays drums.

Bennett Evans, who plays guitar and sings for the band, grew up in Madison, Georgia, where he says there wasn’t much of a music scene at all.

“On the weekends, my family would drive up to Athens and I’d get exposed to bands like R.E.M or pretty much anything in Wuxtry that you see on the glass case,” he said, “That’s sort of the reason I started picking up an instrument.”

Evans and White met while taking lessons at Full Moon Studios School of Rock in Watkinsville and later added Lange to their line-up after meeting him at a party. The three of them have been playing as a group for almost three years and have gone through a few different eras of musical styles, but their debut album ‘Time Never Wasted’ is deeply rooted in the alternative hard rock sound of bands such as Radiohead, The Strokes, Cage, The Elephant, The Black Keys, and Deerhunter.

“We’re also experimenting with some new sounds we really like, which is exciting because we’re recording an EP this month,” said White.

While they do draw influences from these bands, they aren’t trying to copy and paste from them. Their sound is impressively mature and complex, showing the band’s skill as both individual members, and as a unit.

While some of their songs, such as ‘Serotonin’ and ‘Together We Roll’ were written with the intent of being performed live, others prove the band’s willingness to push their own creative limits and experiment with different songs. For example, the song ‘Clay’s Pond’, was said to have “come alive in the studio”.

“That song is different because it wasn’t conceived in the same way the rest are, that are focused on a live setting,” said Lange, “It has a more intimate feel.”

The band says they have a very collaborative writing process and will often cross write for different instruments. One song that the band said they struggled with was ‘Speed Dial, Pt. II’, where they had a lot of trial and error, but songs such as ‘Dogwood Flowers’ and ‘Serotonin’ came naturally and were finished in a matter of hours.

Most of the album was written from March to July of 2020 and was recorded in Athens at Chase Park Transduction Studios, where it was engineered by Ben Hackett and mastered by David Barbe (who runs the music business program at the University of Georgia).

The band also mentioned some local influences that have pushed them to be better musicians.

“I did Camped Amped at Nuçi’s Space for, like, six years in a row,” said White, “All the local successful musicians in Athens are instructors at this camp and they put us in bands together. That was really big for me… Huge shoutout to Nuçi’s Space for that.”

“I know a lot of the members of Five-Eight pretty well, they’re great guys and good role models. Guys in Love Tractor as well, all excellent musicians and really great people” Lange said

Evans even credits some friendly competitors in the youth music scene for their success.

“There was a sprout of teen and kid bands when me and Aaron were first starting out and it was crazy, there was just this insane crop of musicians,” he said, “They weren’t competition, but they inspired us to better ourselves and play good shows… I don’t think we would be here without everyone else around.”

Although A.D. Blanco has already established a growing base in Athens, the band says they’ve noticed a difference in their transition from a high school band to a college band and are working on expanding their base by playing shows in neighboring states.

“I think the biggest thing is that you go from being a bigger fish to realizing that there’s so many other bands that exist in the college realm… There’s this huge array of college bands that you never even knew existed and they’re really, really good. It’s just eye-opening.”, said Evans, “We’re trying to break out a little bit to try and expand that base… We love Athens but if we only play here, we won’t get anywhere else.”

“It’s given us such a rare opportunity to play to more people from more places,” said White, “We’ve made a lot of connections with people from all over now.”

A.D. Blanco is currently getting back into the studio to record with the hopes of releasing an EP in early 2022.