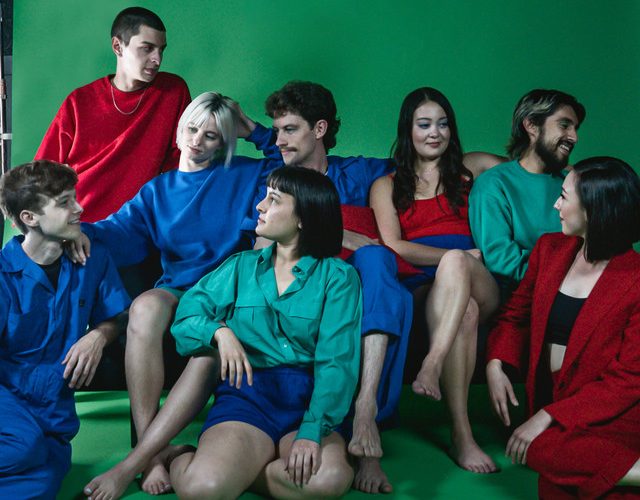 TC Superstar shows are fun, energetic and filled with plenty of dancing. After performing in Athens while on tour following the release of their newest album “As Seen on TV”, we got to sit down with the Austin based synth-pop group and discuss pandemic inspirations, performing, and the future of TC Superstar.

How did you start creating music together?

In 2017, I [Connor] produced Masc as a solo project and when I came back to town I reached out to everyone and said “hey, I have this music, do you want to be the band that plays it?” And they said “yep!” I then reached out to LB and asked if she could teach me how to choreograph dances, and she just said she would join the project as a whole and brought along Emily, Francis and Riko. And we just kept working and playing together.

How has dancing become such a key part of your performances?

We just thought, “oh, what is a project I would really want to go see at a venue?” And of course there would be dancing. The dancing has really evolved on its own over time. You can’t close your eyes and listen to our shows!

What about the color coordinated outfits?

So I [Connor] was born in Europe and returned right after college, and while I was in Spain I saw an exhibit with a bunch of Yves Klein stuff. He would paint entire rooms blue and that’s just the experience, that you are seeing this solid thing, and I was really infatuated with that at the time. The first album was all teal and we handmade all of these teal dresses that we wore for a while. It was all very DIY, but it was a part of the holistic experience. This album, though, is RGB for TV color format.

What was the inspiration and writing process of this album like?

The pandemic changed the album dramatically. It was almost done right before the lockdown, we expected to make some lyric rewrites and it would be ready but then everything shut down. We lost some creative energy, and then just decided “well, the world is pretty different now, so we want to make a different album”. What we were making didn’t feel like something we wanted to say anymore, the context changed. It became a group effort to decide what we wanted to say for this album. After a lot of zoom calls and lyric rewrites we got to where we wanted to be. It is definitely our most collaborative album.

I have to ask, what were y’all for halloween?

We were all Carrie! We all had this extremely sticky corn syrup blood just plastered to us, and we wore these flimsy dresses when it was 50 degrees outside. It was terrible! It was so sticky!

What’s the meaning behind your band name?

It was going to be a very different band name way way way back when, and then we found out it was taken already. We had the album ready and we wanted to start playing shows, so we just picked what would’ve been the single off the album if we were smart enough to release singles at the time. The song title came before the band name. We like that it feels like the name of someone that is very successful, but is not. Actually, when we started the band, the name “TC Superstar” only had one google result. It was a “Tri-County Superstar”. Some teacher from the midwest who had some award, and we felt bad but we totally blasted her off the front page of google.

What is your favorite song to perform live?

Riko: “One and Only”, I was nervous at first, but once you get the choreography down it is the most fun and energetic one. By the time you finish you are totally out of breath.

Aaron: Mine is actually “One and Only” as well, the keyboard part on that one is just so fun to play.

Connor: Those are all fun songs, but I like performing our cover of “Mama Mia”. It’s like a slowed down groovier cover where I cut out the lyrics that I don’t like. (for those wondering, it’s the couplet where ABBA sings “Now I really know, I could never let you go”).

How has the Pandemic affected performing and promoting your album?

Oh, we have definitely been lazy. It’s been hard. Even coming back to performing again has been exhausting and overwhelming. Just remembering how to do it again, people looking at me, it’s all weird! Even this [the interview] is something we have to relearn, reaching out to local radio stations and asking for interviews. It all feels very foreign, to just jump back into it. After two years of not having that, it has been strange. And with dancing, you feel older. You have to be patient and understanding with yourself.

What’s the best thing to do in Austin?

Cheer Up Charlies is the spot. There’s also a lot of great parks and nature surrounding the metro area. Oh, and the food in Austin? The best. You want the best margarita of your life? Go to Austin. And of course, South By is a great thing to go to! Highly recommend it.

Any final thoughts you want to share with listeners of TC Superstar?

Well, we’re walking on a new album and we’re hoping it’ll be a bop! Oh, and we’ve got an animated music video coming out in a few weeks. It’s been months in the making, but it will be coming out soon, telling you will make it happen! We hope to be back in Athens as soon as we can.