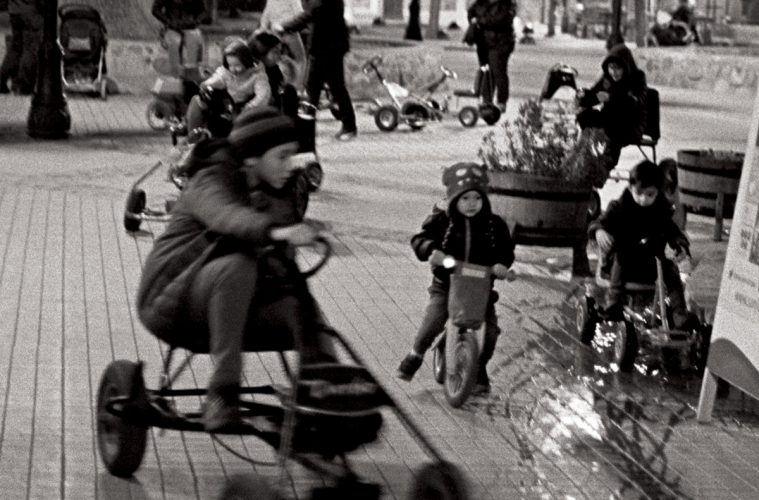 Rock and Roll has long looked for saviors, be it the scrappy punks of the 1970’s, the nihilistic grunge acts in the 1990’s, or the effortlessly-cool garage rockers of the early 2000’s. Ultimately though, this messiah-seeking achieved nothing, and the sands of time swallowed many of those memories.

On Flyer, Paddlefish enter like archaeologists parsing through the ruins of this fallen civilization trying to find some meaning in it all. They try out grunge riffs, punk energy, psychedelic textures, and cool garage detachment, all to great success, but with the energy of a band dancing at the end of the world.

“I built a glider, but that didn’t work” frontman Owen Misterovich croaks on the nervous rocker “Built a Glider” seemingly summing up the collapse of many a rickety dream and rock band. In many ways, this is the central thesis of the record, with Paddlefish tackling growing up in darkness in what was supposed to be the bright tomorrow. Flyer is post-modern angst and post-grad blues rolled into one. Their outlooks aren’t shaped by the fear of instant atomic annihilation, but rather, the slow decline of a decaying planet. These are the songs of a generation asked to save a world long since gone, given no legacy but one of abject failure.“Could we get some more mileage if we just hold our breath? How you feel about silence when the fuel tank is dead,” Misterovich sings on the ghostly Elliott Smith tribute “Turnpike.” He’s been given the keys to a rusted-out jalopy on an old road you have to pay to drive on, yet he pushes on, because what else can you do? That said, Paddlefish spend much of Flyer striking a balance between impending doom and their melodic instincts. Pounding drums and gnashing guitar are set against forlorn backing vocals on the opener “Good As Dead.” Growling distortion and driving cello stabs transform the downbeat “Drain All” into a grungy mini-epic. “Small Song” starts conventionally enough before exploding into a show stopping reversed guitar solo. The closer “Oh Doctor” is as melancholy as any other cut, but Misterovich’s pleas to “fill the ditch in [his] cement lungs” glide by over a Beatles-esque melody, accented by driving drumwork and glittering tack piano. “It’s time to feel the love you’ve been giving all this time. It’s your time to be fine” Misterovich sings during the chorus of “Enough.” Even if they can’t find optimism, Paddlefish are doing everything they can to find happiness.

In today’s world, it can seem like striving to “grow up right” was a waste, and that there’s little left to believe in. Flyer reflects as much, with its hooks all filtered through polluted sunshine and acidic rain. Still, Paddlefish finds some solace in simply surviving. Flyer has been called a coming of age record, but it’s a coming of age record for its time. It makes little of growing up, but it’s a celebration of living one more day.