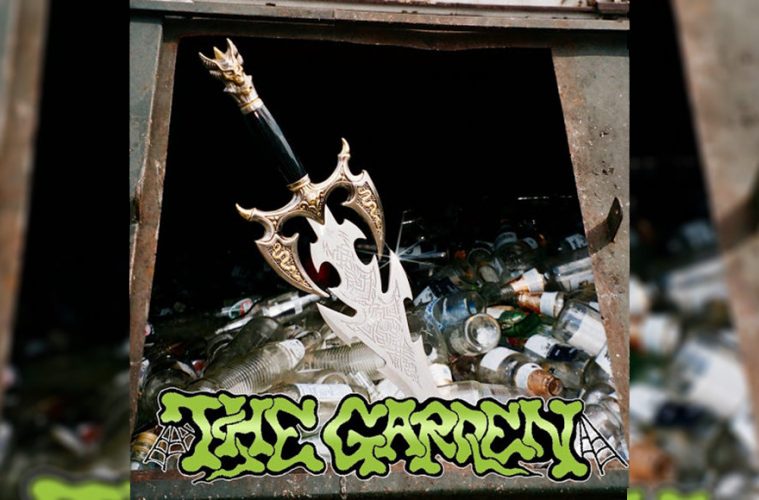 Whenever introducing Kiss My Superbowl Ring to those not-familiar with the punk duo of twins Wyatt and Fletcher Shears, the Garden, I always recommend they watch their label’s official interview video for the album to get a better sense (and brace themselves) for what they are about to hear.

In it, the twins are clad in tacky, black garments of the dated aesthetics of the late nineties; the interviewer, a sleazy, low-budget rendition of a goblin reads (in a tongue not of this realm), a mix of ridiculous and serious questions off a scrap of cardboard; the set is a literal pile of trash; and the twins lightheartedly wrestle, wheelbarrow, and exchange foot massages with their Middle-Earth reject of a host.

This unorthodox showing perfectly captures the essence of the Garden and Kiss My Superbowl Ring: it is bizarre, it is provocative, it is incoherent- it is punk.

In the truest spirit of the genre, the Garden’s second LP is gorgeously desultory and chaotic. With this in mind, the album is never to be taken too seriously; there is no need for deep rumination or intense deconstruction, it is simply the Shears’ witty and coolly apathetic take on the genre.

Fittingly, most of the tracks have little depth past their titles. “AMPM Truck” is about falling asleep at the wheel, “The King of Cutting Corners” is about being lazy, “Clench to Stay Awake” is about the Shears’ tendency to faint, and “Please F**k Off” is about what you probably guessed. This surface-level quality does not at all take away from the merit of the songs because they were not made for any sort of deep musing- they were made for raging in the pits, blowing out speakers, and ‘provoking the man’. The title track illustrates this punk ethos perfectly; it is a straightforward, yet obnoxious display of ego powered by the loud rage of bass and drums and the anxious vocal delivery of the thirty-five instances of the line “Kiss my Superbowl ring” preceded by a range of qualifiers such as “If I come off as a problem” or “Pretty over being passive”. The blunt diatribe maintains its intensity throughout the record as Wyatt belts out line after lurid line: “I see you sucking on nostalgia’s c**k” (“Lurkin’”), “All these bastard ass f**ck goblins s******g on my lawn” (“Sneaky Devil”).

However, the Garden does not limit themselves to these brash lyrics as there is a great deal of the clever wordplay that has separated the duo from their punk contemporaries. On “Lurkin’”, Wyatt and feature Khalif Jones take poignant jabs at materialism and the lack of substance in modern society: “I’ve got a big gulp, full of defects// But I’m the real thing and you’re a bounced check”, “Snakes in the grass tyrna bite me// I’m smiling back at ‘em slightly impolitely (Yeah)// I’m a lover not a fighter but I will bark at the biter”. Other tracks such as the deep cut “A Fool’s Expedition” further demonstrate the Garden’s ability to delve deeper lyrically and thematically as lines such as “Chapters aren’t meant to last forever// Turn the page, climb the ladder// Don’t let issues get fatter” explore the difficulty of coming to terms with a poor personality.

Arguably more important than this lyrical variance is Wyatt’s dynamic vocal performance; the tracks delicately balance voracious, black metal screaming with more coherent deliveries. By never wholly committing to either intensity, the album has a tremendous sense of efficiency, minimizing any unnecessary downtime or drag.

Further contributing to Kiss My Super Bowl Ring’s fiercely brazen energy is the all-out aggression of the Shears’ instrumentation. Wyatt’s bass chops are all the heavier and more distorted, often sounding more like a piece of heavy machinery stalling and churning than the actual instrument (in the best sense of that statement). His prowess on the strings adds more synergy to the album as it supports Fletcher’s guitar work- an unexpected, but more than welcome addition to the traditional Garden outfit of just bass and drums. It is the percussion, however, that is the main star of this feverish feature. Fletcher shows no mercy on his kit as he consistently pounds out Blitzkriegs of drums, leaving limited space to breathe but plenty to head-bang. Though his trigger-finger for the cymbal and hi-hat is beyond sensitive, the calculated use of his other tools keeps each track from sounding stale and repetitive.

It is not only the live elements that make the helter-skelter punk sound, but the production. The album transcends the high standard for engineering established on their last project, Mirror Might Steal Your Charm. Distorted industrial sounds and phaser effects litter the project’s sonic wasteland making it all the weirder and more bewitching.

Unlike their former projects which were strictly the creations of the brothers, the Shears called in some assistance with production on this release. With the likes of 100 Gecs’ Dylan Brady and Kero Kero Bonito’s Wharfwhit, the album has well-placed touches of maxed out electronica and hip-hop.

By dipping their toes into these other genres, making some of their most aggressive-sounding music to date, and demonstrating their ability to provoke both thought and disgust with their lyrics, the Garden have fully realized on this project their Vada Vada mentality, “a term that represents total freedom of expression without boundaries or guidelines”. The Shears knew exactly what they were going for with this project and executed with great precision; they experiment when appropriate but never stray too far from the punk sentiment and sound. Too often do artists in the ‘too-cool-to-care’, counter-culture genres try too hard and end up… well, caring. But not the Garden; their penchant for creativity, musical prowess, and awareness of their strengths have enabled them with a very-self aware and focused punk album.

To summarize, Kiss My Super Bowl Ring is a shambolic, gratuitous, and repulsive fever dream of what can barely be considered music- and it is an excellent album for those reasons.