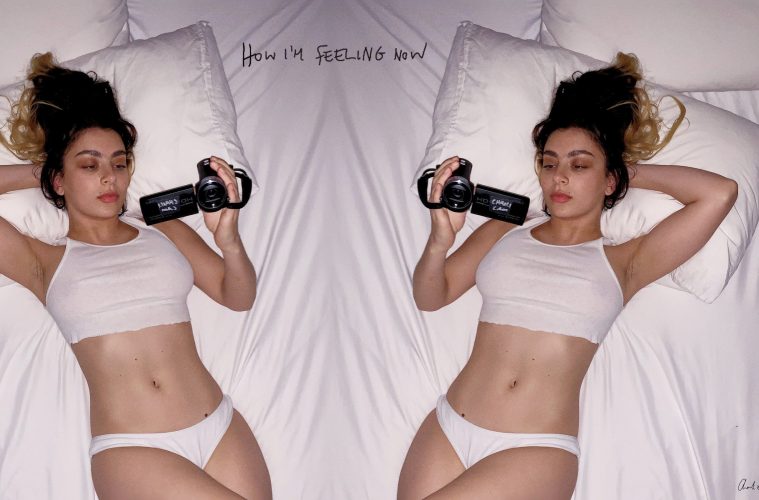 In today’s society of consumerism and excess, we naturally expect only the best from everything we consume: food, entertainment, services, etc. However, this standard is often and unfortunately projected onto our artists. We tend to see them as glamorous icons with never-ending creativity, unwavering self-confidence, and even unbounded wisdom. This misplaced perfection-schema often leads to a sizeable and unpleasant disconnect between fans and creators. On her sixth full-length, how i’m feeling now, Charli XCX smashes this divide with pop bravado that brims with tenderness and honesty.

Created almost entirely during the covid-19 pandemic, the album explores what the Cambridge-native has been thinking, feeling, and going through in the challenging times of quarantine and isolation. She considers loneliness, fear, lack of motivation, and a number of other disagreeable feelings. And with this rare situation that has affected everyone regardless of economic or cultural status, her confessions are some of the most relatable in the realm of pop music. On “anthems”, for example, Charli avoids any pop-star veneer and lets her true thoughts speak directly.

“Try my best to be physical
Lose myself in a TV show
Staring out to oblivion
All my friends are invisible
Twenty-four seven, miss ‘em all”

With lines this forthright throughout the record, it is not hard to connect with the voice on the other end, especially when it speaks on almost universal experiences like succumbing to laziness, binging fast-entertainment, and missing your friends. Even more common ground is covered throughout the album with tracks like “detonate” and “enemy” that divulge feelings of frustration and self-doubt that are sometimes too hard to push away in solitude.

As much as Charli acknowledges the difficulty of the pandemic, her shining optimism dominates the record. This hopefulness manifests explicitly in the stadium-ready production of B.J Burton, A.G Cook, and Dylan Brady and more subtly in her silver-lining mentality which never allows songs to finish on a sour note.

Arguably greater than any inspiration on the album is the confidence that she finds in her relationship. With the onset of the pandemic, Charli and her boyfriend moved in together, doing away with their cross-country distance. This not only avoided what was looking to be the end of their seven-year journey but breathed new life into it. Charli makes this revitalized love the centerpiece of the album and celebrates it with potent energy on several tracks. To name a few, “claws”, “7 years”, and “forever” romanticize this rebirth with unaffected commitment.

Deeper cuts “enemy” and “detonate”, however, reveal the natural obstacles of any relationship such as the fear of your partner changing and the need for space. Allowing listeners to see both the highs and the lows not only brings to light Charli’s candor but her ability to find confidence in some her darkest places, an underlying theme of how i’m feeling now.

Still, Charli goes beyond expressing relatable quarantine emotions and the trials of relationships to bridge the gap between pop-icon and fan as she takes a much more casual, D.I.Y approach to the record. Holding true to her commitment to “make a brand-new album from scratch” and only “use the tools that I have at my fingertips”, almost all the writing, recording, and producing was performed domestically or through the internet. With less editing and revision in this style, a certain delicacy arises that makes the album seem more down-to-earth and natural without sacrificing a significant amount of quality.

Even the album’s presentation makes it come off more as a quarantine hobby/project rather than a full-effort studio album: the track names are simple and to-the-point, the title and songs are stylized in lower-case, and the album cover features a loosely-dressed and unmade-up Charli (how many of us have been carrying ourselves in isolation).

Further connecting with audiences, much of the album was developed with or alongside her fans through the internet. With Zoom calls, Instagram live sessions, and behind-the-scenes clips, listeners had the opportunity to see and contribute to the creative process in real-time. This collaborative effort culminates in the music video for “forever”, a montage of home videos sent in by listeners. With help from editor/director Dan Streit, Charli and her fans create a touching collage that in just four minutes captures so much of the beauty of life.

While this commitment to the ‘low-budget’ approach gives how i’m feeling now a great deal of character, it sometimes leaks into the wrong areas of the project such as consistency and focus. Track-to-track, there is little emotional or thematic congruity as evident in the first three songs which contrast each other a little too uncomfortably. Granted the record is trying more to be an assorted collection of reflections rather than some incredibly tight, structured narrative, however, such an ethos may have worked better as an EP with some of the more out-of-place tracks dropped.

These past few months have undeniably been a weird time for music. With inspiration limited, the creative process disrupted, and live interaction with fans totally out of the window, no artist should be blamed for feeling a little lost in this unusual situation. However, the ability to adapt separates the great from the average and Charli XCX has demonstrated this quality with bold courage. how i’m feeling now is her making the most out of a terrible situation; she presents herself with naked honesty, develops the relationship with her fans, celebrates her love, and takes on the many challenges of the quarantine life- in all of this Charli finds and shares a newfound confidence that both entertains and inspires.