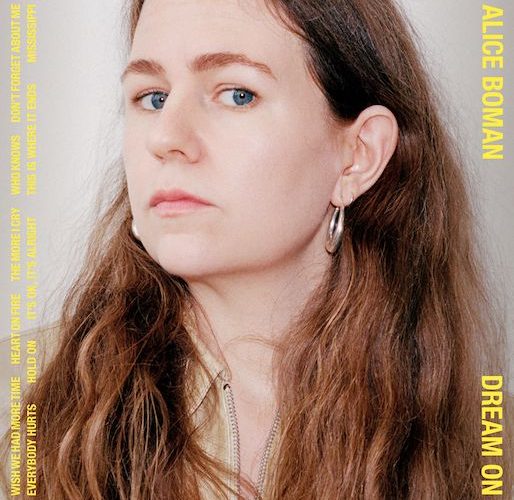 Dream On is an emotional title bout. From the opening strains of “Wish We Had More Time,” I knew I was in for it. Alice Boman’s haunting, feathery-light vocals combine with subdued, ambient instrumentals to absolutely rip your heart to shreds. I’ve heard Boman’s music described as having a “profound sense of quietness,” and I can’t really come up with a better description than that. These tracks settle like a snow flurry on your eardrums and invite you to simply sit with yourself for half an hour and feel. It’s a one-two punch – the delicacy of the music makes the weight of the lyrics ten times heavier. If you allow yourself to listen just a little closer, you end up shooting down the vortex into profound sadness. TKO.

Do I have criticisms of this album? Absolutely. Some of the tracks blend into each other, and the entire album has very little emotional variance beyond sadness. However, I’ll let Boman defend herself: “There’s no happy songs here, it’s a sad record, but I think it’s hopeful too.” She’s right. I was about to shut this album off and cry myself to sleep, but suddenly, at the very end of the finale track, “Mississippi,” you can hear Boman walk out of the studio and shut the door. Blink and you’ll miss it, but it was the message I needed. Boman has physically walked away from sadness, and us listeners can too. On my second listen, I started to pick up the hopeful notes she was talking about. You won’t find them in the lyrics, but there are slight chord shifts towards more uplifting sounds as the songs end. The fight’s over. Exit the ring. Maybe the sun’s out.

Dream On is about allowing yourself to feel your hardest feelings and know that they’re not permanent. Yes, it’s a gut punch of a record, but Alice Boman is right down in the pits of despair with you. She’s holding your hand and letting you know that you’re not alone, and we’ll get through it together.