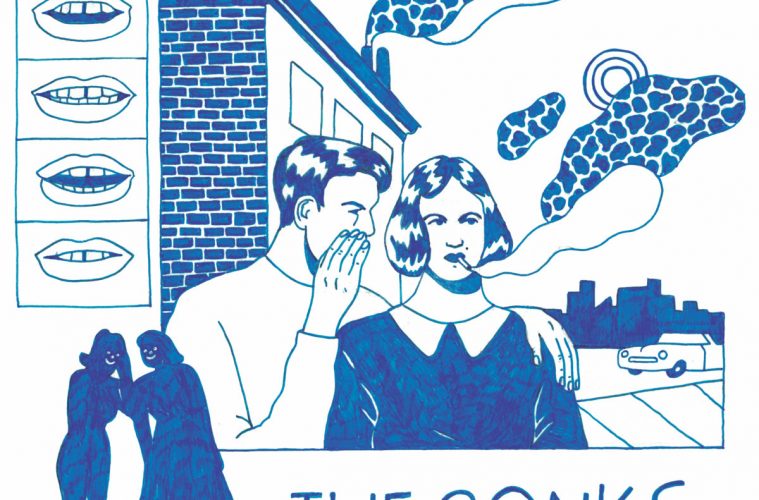 Featured Album Review: The Gonks – Five Things You Didn’t Know About The Gonks

Hey gang, what if They Might Be Giants had an affinity for saxophones and drums? They might have ended up with The Gonk’s first record, Five Things You Didn’t Know About the Gonks. Ava Lynch heads up the experimental-heavy band recently signed to Sonny Smith’s (of his Sunsets fame) new label, Rocks in your Head Records. This album has four component parts: spoken word or four note melodies, drums, pulsing electric guitar, and horns. The album absolutely flies by; coming in at 16-and-change minutes and ten bespoke tracks. However, if you put this album on repeat, you’ll lose an entire hour before realizing you’ve heard the album five times and Spotify has labeled you president of the Gonks fan club.

After the first five tracks teach us the titular five things we’re here to learn about The Gonks, the album seems to revolve around track 7, “Nuns Having Fun”. The album art seems to reflect this motif as well. Somehow, that’s the exact vibe I get from the album, almost like a coming-of-age movie soundtrack if the movie was Ferris Bueller’s Day Off but with the good sisters of your neighborhood nunnery driving a car backwards to take miles off before the good Father sees (I think that’s something they did in the movie, it’s been SO long). In terms of mind-numbingly fun They Might Be Giant’s “Toddler Hiway”-adjacent music, “I Hired a Hitman” is the reminder that the album looped, but you might listen a little bit longer because it’s jaunty and fun (but I do wonder what the hitman code IS). “I’m Dead” is the archetype of the album, composed of purely drums, horns, and guitars. Its three chord progression with a guitar solo over the top is just purely fun and feels like a great prelude to the back half of the album. Final note: listen to “Hot Sick Vile and Fun”; it’s the most traditionally “song” formed track on the album and I enjoyed it a lot.

Altogether, the Gonks put out a WACK album, but it was just the right kind of wack that would tickle my eardrums after a listen or two. It’s eclectic, a perfectly fine and accessible level of weird, and definitely an album that some two-year-old kid is gonna hear on a car ride with their ex-college radio parents and fixate on for the next 16 years. I kinda want to meet that kid. This is a great jangly percussion-and-two-chord album. Like the nuns they sing about, the Gonks are just having fun.