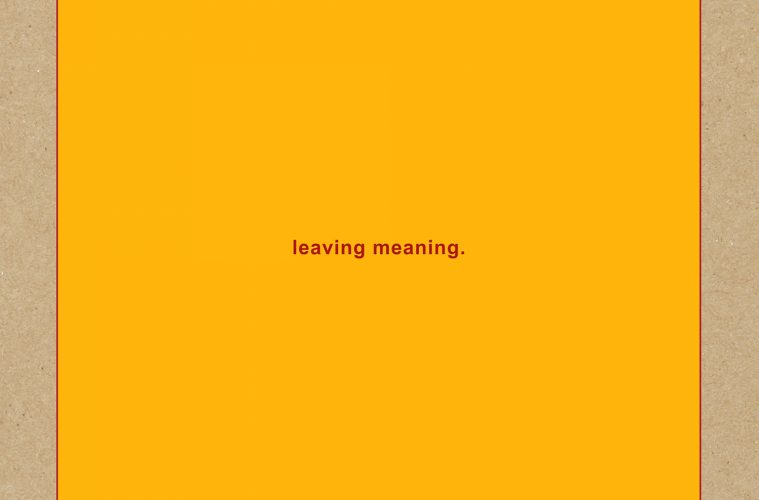 Spearheaded solely by frontman and cult-like leader Michael Gira, Swans have returned to destroy conventions and reinvent their sound once more. The industrial/experimental rock collective first emerged from the New York no wave scene in the early 80’s, and have since accounted for some of the most overtly brutal, horrifically intense, and cacophonous compositions in “rock” music throughout the past 4 decades. In true Swans fashion, Leaving Meaning breaks all the rules, and solidifies that the words “Michael Gira” and “boring” will never be used in the same sentence.

Leaving Meaning marks a new chapter for Swans. Exiting a decade that brought a behemoth trilogy of albums, this newest project, which marks the groups fifteenth studio album, feels like an epilogue of sorts. Far more placid than the free-fall into chaos of The Seer or To Be Kind (two essential Swans listens), this 93 minute double LP is based primarily around unhurried structure and beautiful builds. This album is a marriage of sorts between the familiar, cavernous Swans sound and Gira’s acoustic folk group “Angels of Light”, and it creates a sound of atmospheric unease where percussions are shuffling in the background and guitars are gradually layered in scattered arrangements. In the middle of the ambiance, Gira’s vocal delivery is more often in the form of crooning chants or spoken word verses that assist in molding the Gothic-Folk soundscape creating a twisted mix of bright yet disturbing.

The narrative on this album focuses around numerous different themes – which all encompass the overall lyrical tone: leaving meaning. Gira, with the help of a rotating cast of musicians including The Necks, Anna and Maria von Hausswolff, Baby Dee and more, beckon us to ponder reality, our perception of existence, and the fate of the unknown. With deep philosophical undertones, the title of the album sums up the desired motifs perfectly: a corrupted selfhood, dismissing any connection to meaning or purpose at all. Despite a more tame delivery than previous works, Leaving Meaning is not an ‘easy’ listen by any means. This album is long (albeit not as long as previous 2+ hour LPs); it challenges the listener to pay attention and interact with the music. Tension is often left unresolved, never quite reaching the grand crescendo that made previous albums so monolithic. But in a way that is the charm of this record – it is much more subdued and mystic, layered with sonic, trance-like spells that inch their way into the ears.

The album starts with a brief instrumental opener, ‘Hum’, and the first real track, ‘Annaline’, begins to unfold the new direction and sound with a soft, transcendental crawl backed by crisp piano and floating guitar. From there, Swans waste no time putting the foot down the foot down to deliver one of the most powerful tracks on the record – ‘The Hanging Man’. A dissonant, primal groove carries this song across the near eleven minute runtime as Gira constructs the album’s motifs as he shouts: “I am not what I just thought!”. A dark, Southern Gothic ballad follows with ‘Amnesia’ and the powerful choral chants of the von Hausswolff sisters float above the cold lap steel guitar foundation.

The mesmeric title track is a ten minute repetitious lullaby that is an ambient and acoustic pit-stop before another highlight track of the album – ‘Sunfucker’. If there was any hint or callback to the most recent past works of Swans, this track would be it. It’s a ghostly concoction that begins with tribal like chants whose imagery paints a picture of a civilization commencing some sort of rite or ritualistic sacrifice. It thrums about but breaks into a pounding groove at the midpoint. It hammers in a way that doesn’t crush, maintaining the ‘softer’ and more reflective approach to this record. We then transition into a nightmare-ish ballad when arriving at ‘Cathedrals of Heaven’. It is a remarkably delicate track where musical layers get peeled back more and more with each listen.

‘The Nub’, the longest track on the album (but still pales in comparison to some of the more lengthy songs on the back catalog), is a tense blend of jazz elements, drone, and noise where bass and drums take lead role to create a hauntingly cold atmosphere supported by Baby Dee’s necrotic vocals. It builds to a chilling climax well worth the twelve minute wait. The first single, ‘It’s Coming It’s Real’ follows with its Southern twang and, dare I say, upbeat harmony. The tension continues as the instrumentals slowly erupt into a huge-sounding, spiraling chorus that emerges from the depths. ‘Some New Things’ and ‘What is This?’ are a pair of palate cleansers that employ more straightforward guitar work and repetitive structure. The latter of which is unrelentingly repetitive with cryptic lyrics reminiscent of 1995’s “The Great Annihilator”.

The closing track, ‘My Phantom Limb’ is the end all be all for this album and bookends a successful journey through the newest reiteration of Swans. This is by far my favorite cut on the record – a dark, schizophrenic shift reminds everyone of exactly who they are listening to, and it demands attention. The rhythm section stalks through the night; the percussion pounds at each pulse; the strange and disturbing vocals clash between layers. This track offers the most brutal moments on the album, and is faintly reminiscent of “Filth” and “Cop/Young God” era Swans with the industrial and bludgeoning pace that churns along every beat, but still maintains the ethereal feel of the album.

Leaving Meaning is a beautifully haunting, atmospheric triumph both in content and execution.  In their earnest and chilling spirit, Swans have closed 2019 proving they are still a seismic force to be reckoned with – something few bands are capable of (let alone after nearly 4 decades). Leaving Meaning is one of this year’s most ambitious undertakings and is an essential listen for old and new Swans fans alike.