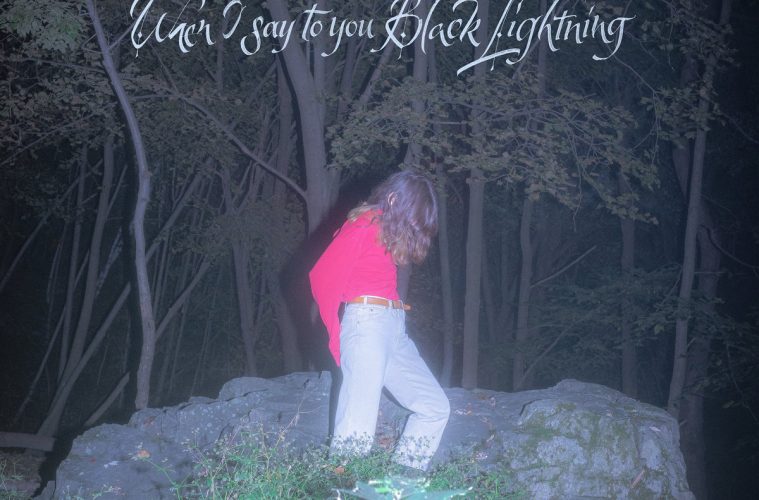 Featured Album Review: Common Holly – When I Say to You Black Lightning

Common Holly is Brigitte Naggar, and she’s got a question for you. In an interview with The Fader, Naggar asks, “When I say to you ‘Black Lightning’, what do you say?” Her sophomore album When I say to you Black Lightning focuses on the idea of memory, response, and vulnerability. This album alternates between heavy orchestra with traditional indie production technique and stripped acoustic-only tracks, and I had to say I enjoyed every track along the way. This album is so bleak in places that the word “bleak” isn’t quite enough to do it justice. Somewhere during research, I saw this album filed under “noir” and that is an incredibly fitting description.

Before continuing the breakdown of recommended tracks, I’d like the record to show that there is not a bad song on this album. Each song has some remarkable trait, whether it’s in the lyrics, the vocals, the instrumentation, the progression, whatever. Listen to this album fully, it’s absolutely worth the thirty minutes.

The first track, “Central Booking”, was the first single released from this album. The chorus opens with a sentiment that can be extrapolated to any person’s experience, even if it’s not identical. Naggar writes “I’m sorry New York broke you/It cracked your stamina/I think perhaps it woke you/But now you’re lost in Canada”. To Naggar, this statement is personal; she was born in New York and emigrated to Canada at a young age. However, almost everyone comes across a time in their life where they feel as if they’ve been chewed up and spit out by circumstance, whether or not it was because of a physical or emotional location is somewhat irrelevant. In that taxing time, it’s so easy to move somewhere else away from the chaos just to drift along the rest of your days. This song is anxiety-inducing, with an odd noise behind the sentimental lyrics of the song.

The fourth track, “Measured”, was the third single released from the album, leading off with the potent lyrics, “You unbuttoned your shirt and I looked at your heart/Then you showed me your lungs, yeah you pulled them apart/And I echoed it back and for what it’s worth/I think we’ve been measured up for pain since birth”. This song is a stutter of hums, trills, and a whining guitar. Every second of this song speaks of a vulnerability that is frightening to think of, knowing that someone has the power to see who you are. Once you give them that trust, they have the power to do what they will with it.

Common Holly’s When I say to you Black Lightning is a haunting whistle of a wind blowing over an empty and cold plain, a perfect album for a foggy New England coastline in November. Its evocative lyrics and ghostly instrumentals make it an extremely memorable album with all the hallmarks of a timeless “noir” project.
-Chase McGee