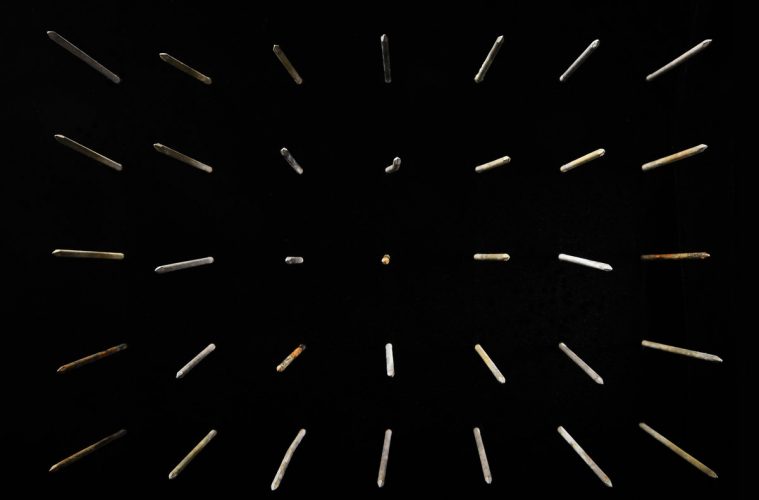 Featured Album Review: Clipping. – There Existed An Addiction to Blood

Just in time for Halloween, California experimental rap group Clipping is releasing their fourth full-length album There Existed an Addiction to Blood, a “transmutation of horrorcore” in their own words. The description is apt; each track on the album presents a new chilling tableau with concepts that fuse horror tropes such as werewolves and chase scenes with the real-life horrors of drug addiction, police brutality, and more.

If you’ve enjoyed any of Clipping’s previous releases, there’s something here for you. While the group’s previous album, Splendor & Misery, threw some fans for a loop by adopting a more narrative and less abrasive style, There Existed an Addiction to Blood revisits the harsh noise production of midcity and CLPPNG on a number of tracks. That said, if Splendor & Misery was your favorite release, don’t fret. So much of what made that album unique from the group’s previous two releases – the ambient production, spoken word style, thematic interludes, and integration of other black music genres – all return in some capacity. And while this is certainly not the group’s first foray into horrorcore, none of their previous releases have embraced the aesthetic quite so much as this one.

The album opens with the group’s standard “Intro” track, Daveed Diggs delivering a solid minute of tongue-twisting rhymes over ambient noise. Diggs’ vocals sound like they’re being delivered through a low-quality tape recorder, evoking the low fidelity aesthetic of found footage films like The Blair Witch Project in audio format. “Nothing is Safe” follows, which the band describes as “a reversal of [John Carpenter’s] Assault on Precinct 13”. The instrumental on this track starts with only a continuous, pulsing piano quarter note and slowly builds into a grand soundscape. “Run for Your Life” features some of the most interesting production on the album, with melodies fading in and out with the sound of traffic passing so that the listener feels like they are hearing songs playing through the windows of passing cars and busses. “Story 7” continues the interconnected narrative of the Story tracks from previous releases, and features some of stabbing noise production characteristic of midcity. The whole album ends with “Piano Burning”, an 18-minute track whose name is quite literal. It may seem like an odd choice, but I actually found it relaxing after the intensity of the rest of the album. Were it not for the twang of the strings snapping, the sound would be indistinguishable from that of a normal campfire. I wish I could go through every song on this record, but I don’t have time to write that and you probably don’t want to read that, so suffice to say that every track brings something new to the table and does it well.

That said, this album is probably not for everyone. I feel that I should establish that I enjoy horror, but I’m not the kind of person who would enjoy Saw, I’m more of a Scream or Us type of person. There were moments on this album where I had to turn it off for a while because it became too intense, particularly on “The Show”, which contains graphic depictions of torture being livestreamed to paying customers. If you have a weak stomach for graphic (though often poetic) descriptions of gore, you might want to pass on this album. If you’re willing to give it a shot though, you’re in for a masterful work of lyricism and production.