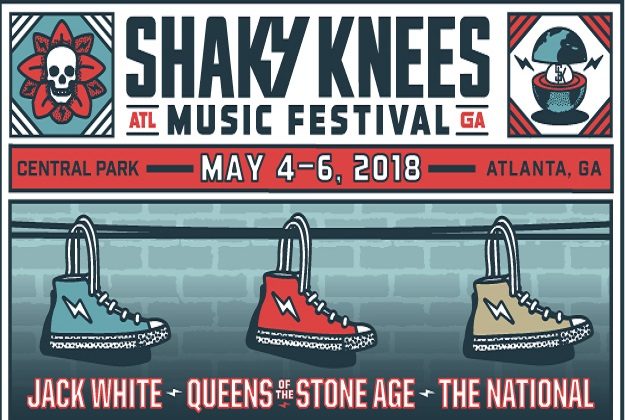 Shaky Knees returns for its sixth year this coming weekend. Jack White, Queens of the Stone Age, and The National will be heading the festival this year’s festival and play alongside more than sixty other artists at Central Park. Here are the artists that two WUOG media correspondents are most excited to see.

Every year, Shaky Knees has a token surf-punk band without fail. This year, The Frights are filling that spot. Although it’s been over two years since their last album, You Are Going to Hate This, the band’s popularity is only growing. As someone who has seen them before, it’s safe to say that the Ponce De Leon stage on Friday is going to be abuzz with sticky, summer punk and a pit full of kids having the time of their lives.

The Voidz  released their second studio album Virtue at the end of March 2018, four years after their debut Tyranny. With their change of name from Julian Casablancas + The Voidz, one could guess that some sonic changes were bound to be in store. Although the album starts out with the somewhat Tyranny-reminiscent “Leave It in My Dreams,” it is apparent throughout the rest of the album that The Voidz have developed an even grittier sound. Although there seem to be mixed takes about The Voidz’s differences from The Strokes, I really enjoy The Voidz and am thrilled to get to see them this weekend.  I saw The Voidz twice in 2014, at Governors Ball and during their fall tour in Birmingham, but I am interested to see how their live performance has evolved since.

With her brand new album, Tell Me How You Really Feel, set to release in a few weeks, Courtney Barnett is one of my must-sees. As someone that has been listening to and admiring her music for years, watching Courtney Barnett at a sunset slot at one of my favorite festivals of the year is something I can’t wait for.

Parquet Courts most recently released a collaborative album with Daniele Luppi, but beyond that album I am excited to hear the diversity from the breadth of their discography. Their fifth studio album, Human Performance, was one of my favorite albums from 2016, and after missing them on their last tour, my anticipation to see them has only grown. Their music covers a wide range of styles, so leading up to their performance I plan on delving into their past albums to get better acquainted with them. The release date for their next album Wide Awake! Is set for May 18th so I’m hoping to hear some new songs slipped into their set.

Saying that I’m excited to see David Byrne would be a gross understatement. I’ve been listening to his discography for as long as I can remember, and he’s finally making a stop at Shaky Knees along his run on the 2018 festival circuit. The mix between Talking Heads hits and his solo work—both of which are equally prolific—is something I’m excited to see unfold. Undoubtedly, thousands of people will be gathered at the Peachtree stage on Friday, and I will be one of them.

I have seen BRONCHO before in a club setting, but I am really interested to see them perform at Shaky Knees. They have amazing energy and it is surely going to be a lot of fun being in the crowd. Over the past year I have really started to get more into their three albums with Just Enough Hip to Be Woman being my favorite as it is chock-full of upbeat songs. Their most recent single, “Get in My Car,” is a lot dreamier, but still retains the hooky nature of their previous work.

Women are finally being acknowledged as forces in  the front lines of rock, and Katie Crutchfield (a.k.a. Waxahatchee) is a prime example. With the release of Out in the Storm in 2017, she solidified her gritty sound with a feminine, emotional vulnerability. The amount of female led acts at Shaky Knees is refreshing, and adds more dimension to the festival as a whole. Waxahatchee’s set will only prove that women can rock out just as hard as the guys, and can even do it better.

Alvvays is another band that I missed on their last tour and am looking forward to finally checking them out at Shaky Knees. They have released two albums, their self-titled Alvvays and last year’s highly anticipated Antisocialites. I have listened quite a bit to both of these albums and am excited to see them performed in person. With the sweet vocals of Molly Rankin, it is sure to be a pleasant experience. I’ll be listening for my favorite songs off Antisocialites,  “Not My Baby” and “Dreams Tonight.”

Chicago-based band, Post Animal, has finally come into their own. Just two weeks ago, they released When I Think Of You In A Castle. The album is a large step forward from their 2015 debut, Post Animal Perform The Most Curious Water Activities. They’re finally outgrown the Drunken Unicorn, where they played the last time they were in Atlanta, and are gracing the larger, well-deserved Criminal Records stage on Sunday.

As a Latin American and Caribbean Studies major, I had to put Chicano Batman on my list of acts to see. I am most familiar with their most recent release, Freedom Is Free, which features a mix of soulful tunes in both English and Spanish. I absolutely love that this language will be performed up on stage and think  it is so important to have Latinx musicians at Shaky Knees so I surely want to show my support. Nevertheless, Chicano Batman is a group of very talented musicians so I’m planning on an enjoyable experience of their funky music.

Check out the full lineup here!