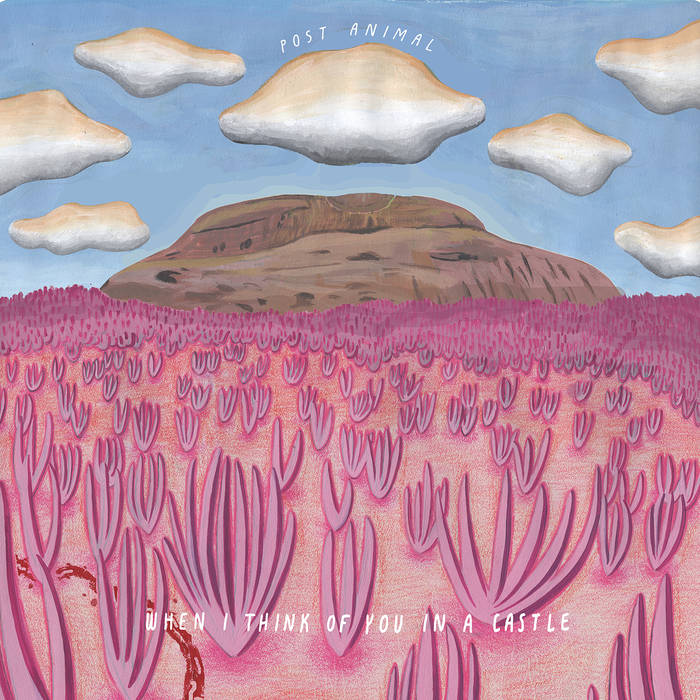 Post Animal are a sextet from Chicago that meld psychedelia and prog rock, and When I Think of You In A Castle is their debut full-length. After a relaxed instrumental intro track, the album kicks directly into high gear with “Gelatin Mode,” which bounces back and forth between fast, driving rock ‘n roll verses and a more chilled out, psych-leaning chorus. In fact, “Gelatin Mode” may serve as the best microcosm of the album, equal parts Thin Lizzy and King Gizzard. Lead single “Ralphie” is a fun, bouncy romp through the poppier side of psych rock, sporting an earworm chorus and guitarwork that wouldn’t be out of place in your favorite 1970s band’s discography. Album closer “Dirtpicker” rides a fast-paced rhythm section churning under a pyramid of several guitar and keyboard lines and Joe Keery’s (of Stranger Things fame!) frantic vocals.

Lyrically, Castle isn’t anything groundbreaking, but it’s also not trying to be. The band is either singing about pursuing women or a deeper understanding – expanding their minds, if you please.  But you don’t come to songs like “Special Moment” or “Victory Lap: Danger Zone” for emotional validation or revolutionary social commentary – you come for the trippy guitarwork of the former and sludgy, fuzzy verses of the latter. The album does tend to blend together a bit, with tracks like “One Thing” passing by with no particular impact, and overall it doesn’t exactly bring anything new to the table. There isn’t anything on the album that your dad’s favorite prog rock bands haven’t done before, but as previously stated, it’s not trying to be. Castle is the sound of six dudes rockin’ out together, a love letter to the experimental rock of the 1970s. Bust out your mood lighting, a good pair of speakers, and just, like, vibe with it, man.