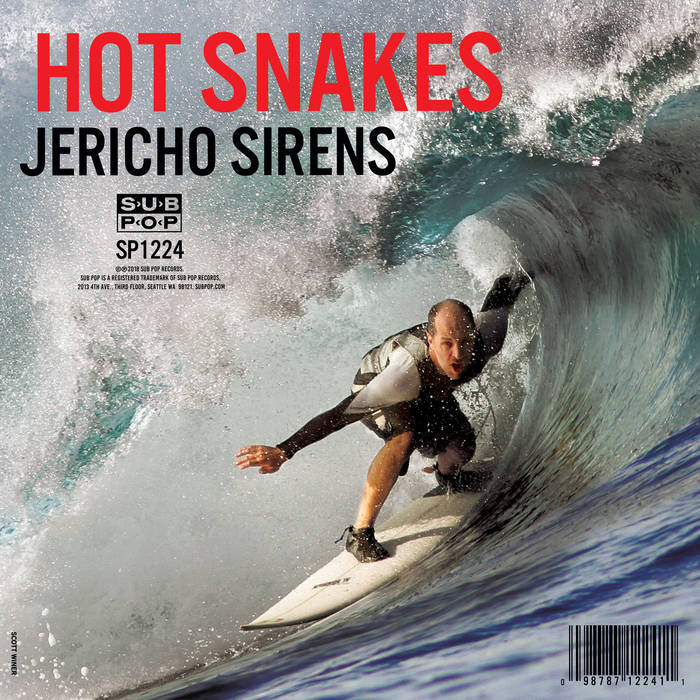 In today’s world, most music fans have become very familiar with the concept of the comeback album. Whether it’s a band coming out of retirement (LCD Soundsystem) or a band that has been touring but just hasn’t put out an album in forever (The Jesus and Mary Chain), most of us are no stranger to this in 2018. On the surface it is a great marketing scheme, building insurmountable amounts of hype.  However, it seems that more often than not it yields very mixed results. Fortunately for Hot Snakes, it feels as though they’ve never left.

On Jericho Sirens, the band’s first full length in 14 years, they’ve given us a blistering 30 minutes of no-frills rock music. The band still sounds as vital as they did on their last offering, with loads of spiraling lead guitar riffs from John Reis, thunderous drumming, and Rick Froberg’s crazed howl at the forefront. The opening gut-punch of “I Need a Doctor” wastes no time reassuring fans that they haven’t lost a step. Lead single “Six Wave Hold-Down” proves to be arguably their catchiest song to date. The band slows things down a bit on the sinister sounding title track, and then proceeds to go straight for the throat with the ferocious “Death Camp Fantasy.”  They ride on that energy for the rest of the album, refusing to let up. On tracks such as “Psychoactive,” Froberg continues to prove that he’s still got hooks for days. The fiery “Death of a Sportsman” doesn’t exactly feel like a closing track, but certainly leaves fans wanting more.

From beginning to end Jericho Sirens sounds urgent, reckless, and full of tension. The band’s signature blend of post-hardcore and garage rock still sounds just as compelling as ever. Froberg and Reis have both spent extensive time honing their craft in other successful bands, such as Drive Like Jehu, Obits, and Rocket From the Crypt. With Jericho Sirens, the duo prove why Hot Snakes remains to be their crowning achievement.