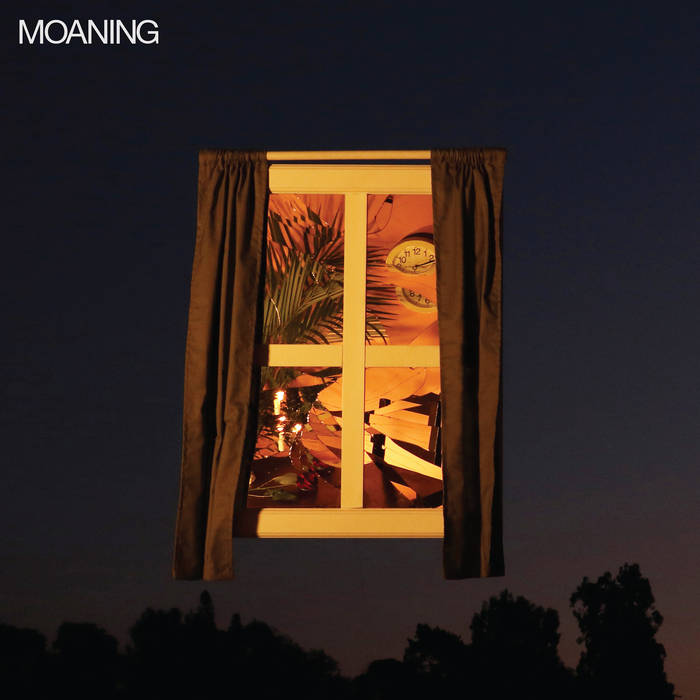 While punk always found itself positioned as the music of rebellion–the youthful proletariat rioting for change within insular battlegrounds of dingy pool halls and bathrooms with amphetamine residue on every surface–post-punk generally found itself rallying under the banner of despondence as the soundtrack of punk’s revelation that the closest their self-destruction came to reaching nirvana was only mass ennui. With the collective unconscious having found solace in the collapse of “The End of History” epoch in post-9/11 America simply through Paul Bank’s passable Ian Curtis impression and Julian Casablancas looking just enough like Richard Hell if you squinted hard enough, it is no surprise Los Angeles trio Moaning reaches for the same palette of sounds on their self-titled debut, an album to cope with the trauma of daily existence in Trump’s America. From the start, Moaning wears their influences on their sleeve, with opener “Don’t Go” evoking the same post-punk dirges of Joy Division’s Closer while the following track evokes the same synth-drenched aesthetic of early New Order, with beautifully picked arpeggios to back lead vocalist Sean Solomon’s nihilist proclamations. While this pastiche may seem shameless, it often provides some of the stronger moments on the record, with “Artificial” splitting the difference between Bauhaus and Killing Joke with its driving baselines and syncopated percussion.

Lyrically, the record opts to go for a minimalist approach, trying to build narratives in negative space rather than assaulting the listener with a laundry list of details. Essentially a one sided interrogation, mid-album standout “The Same” dealing with fear of the future, with self-doubts lobbed as fast as the frenetic rhythm section can keep up, all tossed off with an insouciant “we’ll see how it goes.” While throughout the album there are obvious attempts to replicate the same stream of consciousness self-inventory that allowed post-punk and first wave goth to be so emotionally transparent and vulnerable, these interrogations come off as hollow, something meant to create mall goth melodrama rather than achieve any real catharsis for creator and audience alike. The one exception is “Does This Work For You,” with drummer Andrew MacKelvie assaulting a lead guitar melody so delicate it feels as though it could collapse and decay at any moment into nothing but cacophonous feedback. Over such chaos, Solomon’s self-admissions of it being “impossible to apologize” while still acquiescing that his unnamed partner “can have everything” are one of the few complex portrayals of emotion, allowing his cognitive dissonance to be the emotional kindling for the track rather than its undoing. While Moaning may amount to nothing more than tasteful pastiche at best, the LP provides plenty of brooding atmosphere to accurately capture a collective dread that not many have been able to bottle up, and Moaning seems to have a basement cellar full of it by the end of the LP.