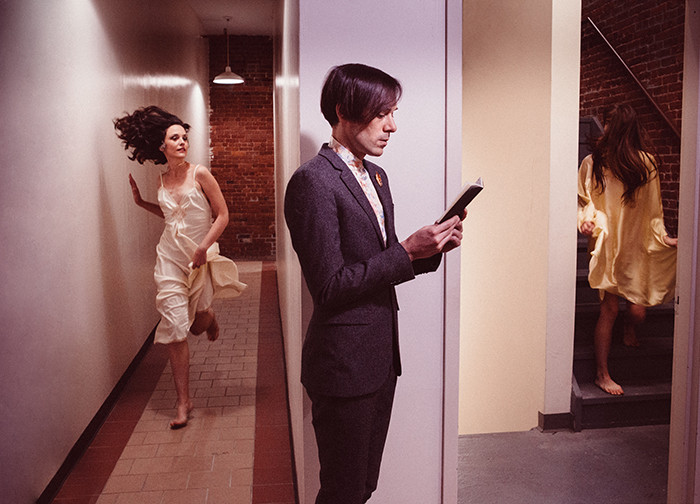 Performing her set between Athens natives Lingua Franca and of Montreal front man Kevin Barnes, Erin Birgy of Mega Bog took the stage in front of a large crowd at the 40 Watt Club on Thursday night. Birgy showcased her strong vocals and accompanying trippy instrumentation in a set of songs mostly from Mega Bog’s 2017 album Happy Together. An interesting point to note was that she commented on how loud the crowd was and how the audience was talking during her performance. Her music has once been described as a “poetic tantrum” and that remained very true during this performance as well.

Thursday night marked the homecoming of local Athens indie-psych band of Montreal, a project started here in Athens in 1996 when the group, fronted by Kevin Barnes, made their debut with the album Cherry Peel. They kicked off their tour in support of their new album White is Relic/Irrealis Mood at the 40 Watt Club in the Classic City, and, fittingly, the show was one of beautiful, psychedelic imagery and vibrancy, especially shown through the costumes worn by performers, fans, and Kevin Barnes as his extravagant alter ego Min Riches.  Why would I expect anything less after seeing them in 2016 for their Innocence Reaches tour?

Of Montreal’s 15th record, White is Relic/Irrealis Mood, stays true to the band’s synth-based, indie pop roots, but went in a different direction than the more contemporary electronic sound of Innocence Reaches in the fact that the new album is clearly 80s inspired. On the band’s website, Barnes addressed his admiration for “80s hits [that] had these really intricate and interesting longer versions that wouldn’t get played on the radio and could only be heard in the clubs.” With only six tracks filling the album’s 41 minute run time, long instrumental passages are frequent and often filled with fluttery horns and synths that position the album as some sort of communication from alien intelligence, composed and remixed by Barnes himself.

Barnes attributes his inspiration for the album to becoming “’simulated reality paranoid” and falling in love, claiming that during the creation of White is Relic he “reached a healthy point of self-forgiveness for his failed marriage and became deeply educated in the lies of America the Great.” Some of this inspiration was evident when the band performed the track “Sophie Calle Private Game/Every Person Is a P****, Every P**** Is a Star,” where it was nothing short of mind boggling to hear Barnes sing the line “Every time you take a breath, the simulation’s breathing too,” all while surrounded by dancers in satanic masks, lush fur coats, and gorilla outfits with pointy fingers and glowing eyes. Barnes easily lured the audience at the show into sharing his paranoia-fueled state of reality with lines like “If we put our ear to the ceiling, we can hear the multiverse seeding, the simulation wheezing” on “Plateau Phase/No Careerism No Corruption.” Lyrics like these paired with the extravagantly dressed stage dancers and unfathomably trippy visuals turned of Montreal into a morphing, living piece of art that left witnesses  wondering how such a spectacle is even possible. The real beauty of the show Thursday night was that bleak moments were temporary; my attention was quickly taken away from the strange, dark lyrics and instead directed towards the bewildering party happening on stage.  A beautiful performance of “Soft Music/Juno Portraits of the Jovian Sky” put the audience ease with euphoric synth sounds and a slow, but driving beat kept all the heads around me bobbing.  Lyrics like “There will be no gentrificating our graffitied warship of summer love” served as a good reminder of the point about the current political state that Barnes is trying to make on White is Relic.

While White is Relic/Irrealis Mood shines a light on the bleak political climate in the U.S. and Barnes’s resulting tortured psyche and paranoia, everything was crazily enjoyable with such an extravagantly bizarre display of breathtaking colors and sounds.  After of Montreal said goodnight, there was no shortage of fans screaming for more,  to which the band, accompanied by a dancing tiger and narwhal and abundance of confetti, returned for a lively rendition of fan-favorite “Let’s Relate” from 2016’s Innocence Reaches.  Shows like this one are a perfect example of why of Montreal has accrued such a dedicated following over the years.  Kevin Barnes is a natural creator and entertainer, and will keep fans coming for years to come.