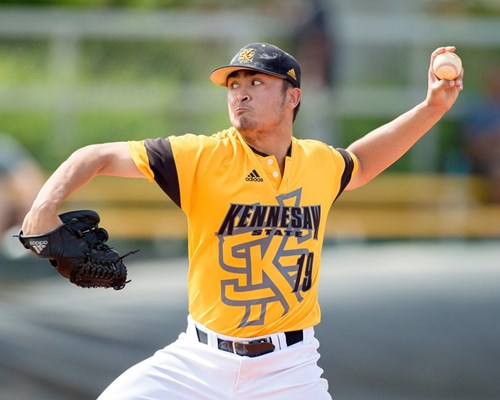 After closing out the weekend series against Georgia Southern, Georgia traveled to Kennesaw state (1-4) and defeated the Owls in a 14-4 blowout on Wednesday to improve to 3-1 on the season.

The Bulldogs started the game off slow offensively. In the top of the first, the Bulldogs had runners on first and third with no outs but only managed to score one run off of an RBI-groundout by junior Michael Curry. In the bottom of the first the owls powered ahead from a two-run homerun by junior Jake Franklin and finished the inning up 3-1.

The Bulldogs tied it up with back-to-back home runs by senior Keegan McGovern and sophomore Cam Shepherd.

Kennesaw State then reclaimed the lead at 4-3 after an RBI-single from Jaylen Smith. This would end sophomore Tim Elliot’s debut as he allowed four runs off four hits with two strike-outs.

The top of the sixth inning was a tale of different teams as Georgia pounded on 11 runs as Kennesaw State pitchers hit four batters and walked five. 16 batters were sent to the plate as Curry had three RBI in the frame coming from a bases-loaded walk and a two run single.

The bullpen down the stretch was resilient as Ryan Webb was first called up, pitching 2.1 scoreless innings with three strikeouts. Sophomore Will Proctor got his first career win after 1.1 scoreless innings of relief while Bulldog relievers Trevor Tinder, Blake Cairnes, and C.J. Smith assisted.

Freshman Ivan Johnson made his first career start at second base, going 1-3 with one RBI.

The Bulldogs will be back at Foley Field on Friday to take on Charlotte (3-1) as they begin a three-game series. First pitch is set for 5 p.m..