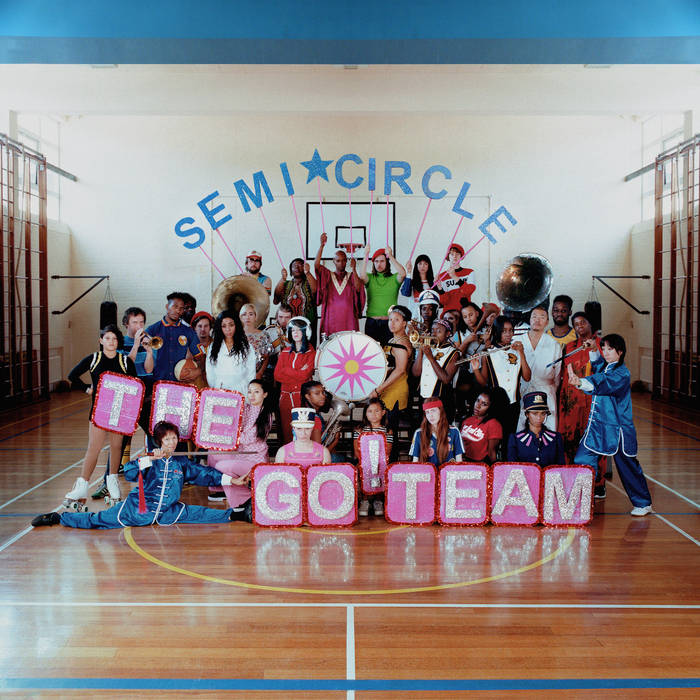 Semicircle is the fifth album by English indie-pop-garage-rock-hip hop-60s throwback group The Go! Team. That’s a crazy, mishmashed description for a crazy, mishmashed sound. On their first album in three years The Go! Team continue their tradition of wild, energetic indie pop with samples, features, and influences from all over the place. This time around they’ve enlisted the Detroit Youth Choir to supply background vocals behind rapper Ninja and singer Ian Parton. The children’s choir isn’t the only thing The Go! Team borrow from Motor City: Semicircle wears its 60s pop influences loud and proud, from the joyous marching band horns accentuating the hip hop beat of “All The Way Live” to the jangly production of opener “Mayday.”

Lyrically, the album reads like a testament to human resilience and hope in troubled times, something much needed after a distressing 2017. With lines like “making good on what we should” and “we’re a generation on the right side,” combined with the bright, festive instrumentation, it’s hard not to feel better just by listening to Semicircle. It’s an enjoyable, carefree listen for sure, but it’s not without it’s missteps: Instrumental “Chico’s Radical Decade” doesn’t really add anything to the album, and the astrology-referencing bridge of “Semicircle Song” is a bit of a head-scratcher. The eclectic nature and revolving door of lead vocalists will surely turn off some listeners – likewise, the children’s choir vocals are certainly not for everyone, but with repeated listens the sheer joy of the album makes it easy for even the most skeptic of listeners to find a song they enjoy.

Semicircle is divisive album, but with highlights like “All The Way Live,” “She’s Got Guns,” “Getting Back Up,” and the adrenaline-fueled “Mayday,” Semicircle provides some much needed optimism and positivity in today’s world. Listen to Semicircle, have fun, and be happy.