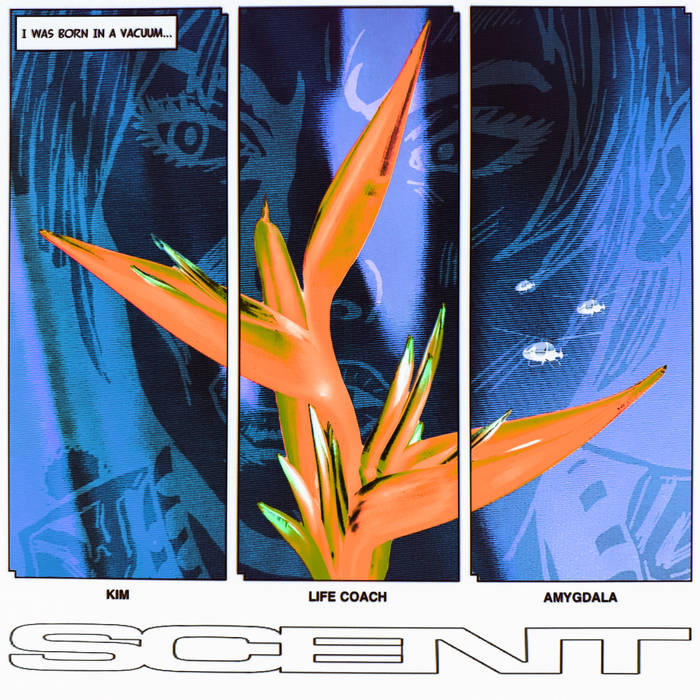 The Kim EP is like watching one of those cheap disco balls project neon shapes on the ceiling after everyone has left the party. You’re on the couch, probably tripping, and this is the sound that surfaces past the lights and the stale party hits bumping through some still playing speaker in the corner. The power trio from London compacts the sentiments of psych-rock, indie-pop, synth-pop, and numerous other similarly dashed genres into its debut that displays a glimmering variety of sound.

Opening track and namesake “Kim” opens with a steady and inherently indie guitar-tambourine section that’s holding the hands of several warping synth effects trying to run off. With the signal of an iPhone message ding (that made me check my phone every time) the song runs free as a bouncier, faster intermediate piece takes its place. The section ends with the eerie, manic repetition of “sometimes I feel like God is spying on me” over a backwards track of strumming that makes me wish his trip was over as much as he probably does. “Life Coach” plays in to Scent’s penchant for hooky indie guitar parts, and I begin to understand why each track name is tacked with handles like “wave_drag_mix.”  They delve into a very stock-rock intro, but mixed with wispy synth pop elements creates an impressively spacey and original feeling; it’s as if Scent is taking their own work and making the remix album, but instead of getting the second-rate follow-ups, we’re being fed near overflowing sound before the original wears us down. It’s catchy bass and psychedelic waves expand the room push you in and out of its tide. “Amygdala” sports the classic inhale-pause-exhale noise and is a nice palate cleanser after the bright noise of “Life Coach.”  It’s rippling notes and somber tone turns toward a more romantic sound, and could earn itself a few blurry slow dances.

While I’m tempted to call this sandwich of sounds bedroom synth, it’s obviously bigger than that. Scent proves to be one of the more significant results of an indie-psych-rock clash that created infinitely more tangled monsters of sound. They know how to keep their balance. One foot is in this soothing elevator pop, the other is in a deeper oil slick psychedelic pool creating a sound that, elegantly tagged as “devotional music” on bandcamp, is easy to dwell on.