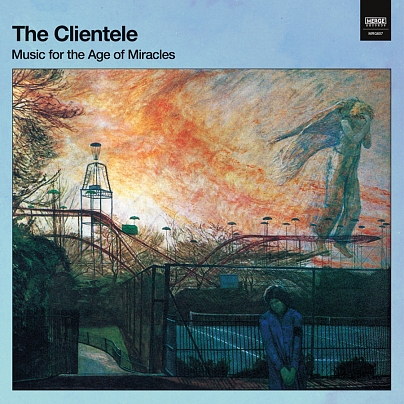 THE CLIENTELE – MUSIC FOR THE AGE OF MIRACLES FEATURED ALBUM REVIEW

Simply stated, the Clientele’s new album Music for the Age of Miracles is beautiful. It has been seven years since the Clientele’s last full length studio album, Bonfires on the Heath and its followup EP Minotaur. While this album is still clearly the Clientele, they have made more than a few changes since 2010. The past few years, the band’s frontman Alasdair MacLean has been focused on another project, a nylon string duo, Amor de Dias. There are many similarities between Music for the Age of Miracles and Amor de Dias’s albums Street of the Love of Days and The House At Sea. The greatest tie between these works is the classical influence, which can be heard in the instrumental tracks, “Lyra in April,” “Lyra in October,”and “North Circular Days,” as well as in the classical/nylon guitar on almost every other track. It is beautiful to hear the tone of the finger picking on the first track, “The Neighbour” intertwine with the other layers of guitar and stringed instruments, like violin to create this lovely psych-folk sound. Although this album favors a more acoustic, almost orchestral sound, it still maintains the band’s traditional 60s sound. The stereotypic 60s psych melodies can still be heard, just on classical guitar, piano, or violin. Throughout all his projects, MacLean has maintained his whispery vocals. Personally, MacLean’s vocals on this album, particularly songs, like “The Neighbour,” “Lunar Days,” and “Everyone You Meet” reminded me of 80s groups, like the Cure and theS miths more than 60s groups, like the Zombies who they’ve previously been compared to. Lyrically, this album does not disappoint. Seasons, specifically fall, are a key image seen throughout the album. In tracks like “Lunar Days” there is a connection between fall and fleeting youth, with the lyrics “as summer turns, I seem to fall away.” In this album, the Clientele is dealing with age, nostalgic for younger days. The spoken track “The Museum of Fog” is a great example of this and also displays MacLean’s brilliant storytelling. He speaks about returning to a place where he spent a night in his teens and discovered music that embodied how he felt and how all the emotions and feelings rush back to him. It is a very relatable track and the music that underlies it is both fun and melancholy. It has been a long seven years for the Clientele and it is great to see them return with an album true to their style as a band, but also shifting to better fit what they feel as they enter a new phase in life.