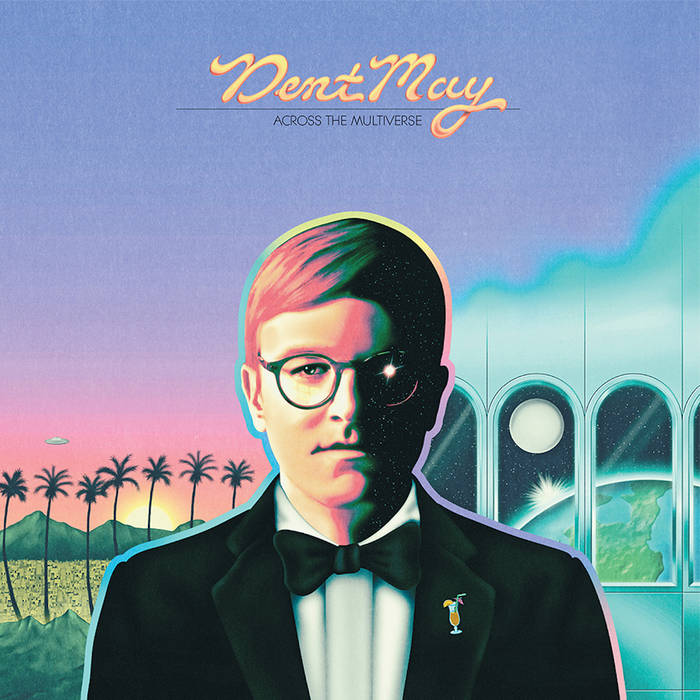 DENT MAY – ACROSS THE MULTIVERSE FEATURED ALBUM REVIEW

“Hello Cruel World” starts with a warm rolling piano that is broken with the drum set coming into the mix. Vocally, May hits some nice highs during the chorus, paired well with the  humorous lyric of the title. “Picture On A Screen” has a more digital influence, both lyrically and musically, as a love song to a digital file/woman. Listen closely and you can hear the old dial-up computer sounds. The title-track, “Across The Multiverse,” is the only song with a featured artist, with Frankie Cosmos as May’s partner in the interstellar duet. The track heavily features midi keyboards and synthesizers, as well as trumpets for the hook of the chorus. “Dream 4 Me,” is dominated by a bouncy piano throughout the song, save for the chorus, in which the song shifts to a grander dream-like tone. “Take Me To Heaven” is the slow jam of the album, comprised of a midi-organ and a smooth bass progression. “90210” starts with a twangy guitar (that comes back in the bridge along with a retro synth) and extols the excess and lavishness of the 90210, while being broke himself. “Face Down In The Gutter of Your Love” feels more surfy with the staccato guitars during the verse. Listen for the bridge and the funky breakdown into the outro. “A Little Bit Goes A Long Way” (track 8) starts slow, letting the ensemble slowly spill into the track as it gains its tempo through the pre-chorus and into the chorus, only to slow back down for the verse. The bridge brings the whole ensemble down for a moment of slow funk, and back into the uptempo march. “Don’t Let Them” is carried by a steady piano chord progression, with the occasional burst of a string section into the mix. “I’m Gonna Live Forever Until I’m Dead” has an almost ironic sounding piano and guitar progression which fits perfectly with the irony of of the title. Lyrically the song is very tongue in cheek. “Distance to The Moon” closes the album with what starts as a simple song, carried by May’s voice and his piano, and builds in grandeur as the remainder of the band fills in, creating a very satisfying build to the finish, with the piano playing the album out.