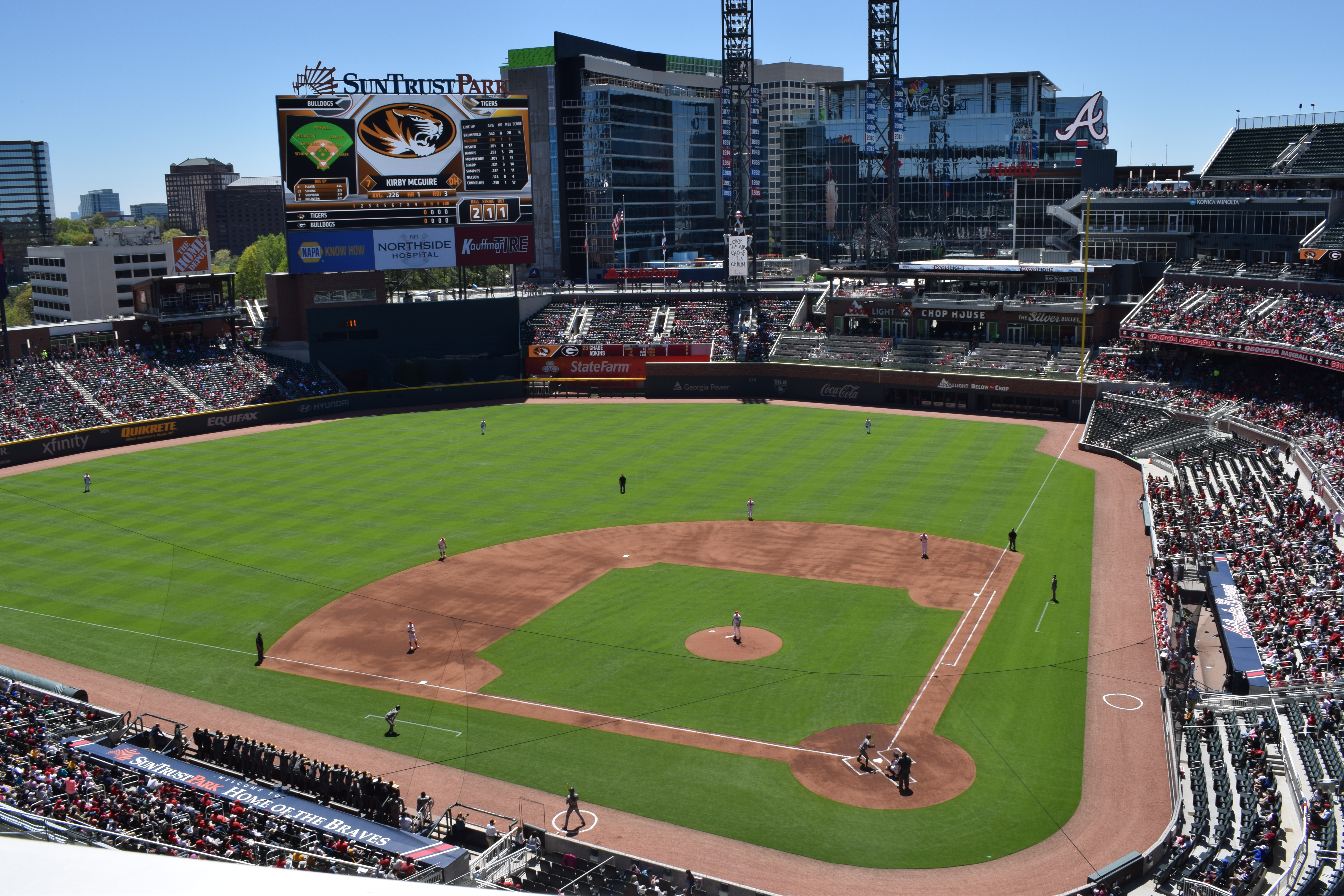 Georgia loses to Missouri in first game at SunTrust Park

A beautiful day, and a new park were not enough as the Bulldogs fell to the Tigers of Missouri 6-1 at SunTrust Park. Georgia is now 14-18 this year with a 4-8 record in SEC play.

This was the first public event at the new home of the Atlanta Braves. 33,025 people showed up for this historic event and experienced a real treat. That is the second largest crowd in NCAA baseball history. Only the opening of Petco Park in 2004 had more. 40,106 were on hand to witness Houston vs. SD State in that game.

“That was pretty overwhelming,” said Georgia designated hitter Michael Curry. “It was exciting to see that. I’ve never been in front of a crowd that big. But that was fun. That was an awesome atmosphere.”

The Bulldogs got on the board first in the second inning when Curry led off the inning with a base hit and was brought in to score on a sacrifice fly by first baseman Adam Sasser.

The lone bright spot at the plate was Curry who went 3-3 with a walk and scored the lone Bulldog run of the game. He finished the series with six hits and has brought his RBI total to 31 which is tied for fifth best in the SEC.

The starting pitching continued to disappoint with Bulldog starter Chase Adkins having an unusually bad outing.

“Maybe it was the adrenaline,” said head coach Scott Stricklin. “You know the first three innings he was really good, kept them off balance. […] But he just kinda hit a wall and it might’ve been a little bit of adrenaline. But yeah the fourth inning got away from him.”

After holding the Tigers scoreless in the first three innings, he was pulled in the fourth inning after walking three and giving up a three run home run to Missouri slugger Trey Harris.

Harris killed the Bulldogs this series with five hits and two home runs. He also made a diving catch robbing catcher Austin Biggar of a double and an RBI in the second inning.

Ryan Avidano entered in the fourth and put on an impressive performance. He did his job going three innings allowing no runs and striking out five. But Blake Carines, who took the ball in the sixth, allowed three runs of his own in only two thirds of an inning.

Georgia threatened in the seventh when Sasser reached on an error and Aaron Schunk drew a walk. But the Bulldogs were unable to bring them home as Shepherd flied out to center.

They then had another chance in the eighth after leftfielder Keegan McGovern reached on an error and Curry roped a single to center field. They were unable to score even after second basemen Will Proctor sacrificed them to second and third.

That was an interesting decision by Stricklin sacrificing sixth place hitter Proctor twice in this game. Proctor is batting .278 and no one at the bottom of the order is batting over .200.

Even with the lack of offensive production Georgia never quit. They continued to fight and kept the energy level high in the dugout as well as on the field. Every player stood on the top step of the dugout like a real Major League team and willed their teammates on till the end.

Georgia will look to regain some momentum on Tuesday when they battle their arch-rivals from Georgia Tech at Foley Field.