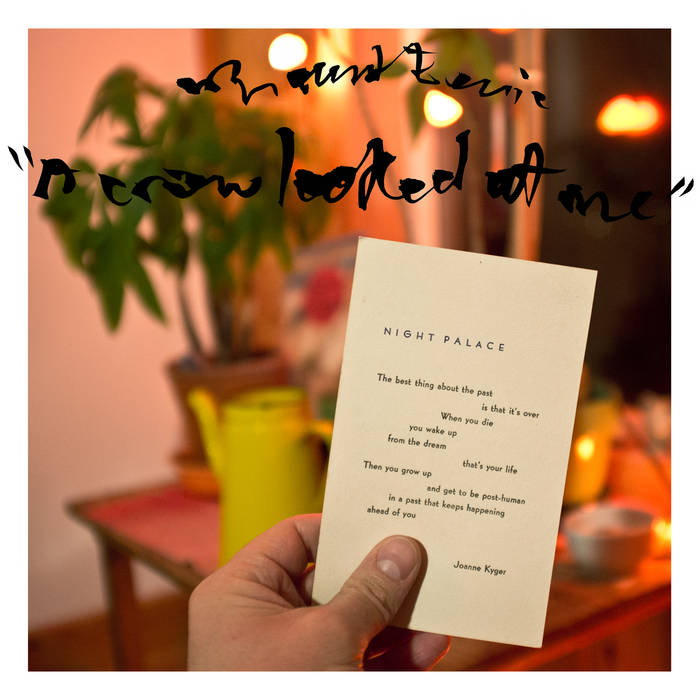 FEATURED REVIEW: MOUNT EERIE – A CROW LOOKED AT ME

Disclaimer: I’ve tried writing this review over and over again, driven by some urge to somehow justify the quality of this album in its own right. What I mean by that is that I am afraid of the backlash that every massively acclaimed album, especially those (like this one) that deal with Real Death, inevitably draws. I wanted to preempt critiques of the album being too context-dependent and musically lacking by writing a review that focused primarily on the sonic qualities of the album. I wanted to show that this album, which is already so dear to me, is good and beautiful in itself- without the context of Geneviève’s death. But I’ve accepted now that this was pointless and misguided. This album would not exist outside of the context that produced it, and part of what makes it so great is how well it communicates context, how it well it functions as a window into actual, real grief. A Crow Looked at Me cannot be separated from its circumstances, and those who feel that this detracts from its quality miss the point of the record.

Mount Eerie is Phil Elverum of Anacortes, Washington. It’s safe to say that A Crow Looked at Me has received the most critical attention of any Elverum project since his 2001 release under the moniker The Microphones, The Glow Pt. 2. Elverum’s wife, cartoonist and musician Geneviève Castrée Elverum who recorded as Woelv and as Ô PAON, was diagnosed with pancreatic cancer in 2015, about four months after giving birth to their only daughter. She died at 35, on July 9th, 2016. This album was written and recorded in the wake of her death, from July 2016 to December 2016, and released March 24th, 2017.

It has been compared to other sparse, folk-tinged records of the past decade that deal with Real Death, such as Benji or Carrie and Lowell, but A Crow Looked at Me is unlike anything I have heard before. A Crow Looked at Me is not poetry or reflection, its documentation. There is no growth-by-way-of-tragedy on this record- listeners are told on the first track (“Real Death”) that Elverum doesn’t want to learn anything from this experience. He puts his grief to record in a way that is so disarmingly honest it feels effortless, as though there’s no other possible way for him to be. Already noted for his sincere lyricism, Elverum drops all abstraction for this release- even when he grasps for metaphor or symbolism (like the bit about the fly on “Toothbrush/Trash”) he falls short. This concrete quality only makes the lyrics all the more powerful, it’s as if the sincerity of his grief is so strong that employing any sort of literary device would only water down the message.

Elverum largely used his wife’s instruments to record this album, and it shows. In terms of instrumentation, this album is closer to an old Ô PAON record than any recent Mount Eerie release. It’s as though Elverum is taking the abstraction out of not only his lyrics but also his music- fuzz and ambience and really any sort of noise experimentation in general is mostly absent from this record. Certain sonic signatures still surface, however; there is black metal influence on the penultimate track “Soria Moria” along with use of both inter-album recall (“I went back to feel alone there” is a line lifted from his 2001 song “The Moon”- both lyrically and sonically) and intra-album recall (“Death is Real” is repeated across multiple tracks). A large part of the impact of the instrumentation in this album is inherently contextual- while the sparse arrangements are themselves emotionally gripping, they’re all the more crushing when compared to his earlier work.

I’ve never heard an album so simultaneously static and overwhelmingly, jarringly heavy. I’ve listened to A Crow Looked at Me every day since it was released. Until listening to this I’ve never felt that too much sincerity in art was possible, now I’m not sure. Maybe an album so emotionally direct and honest shouldn’t exist, maybe a certain level of abstract obscurity should separate the listener from the artist. Maybe A Crow Looked at Me is anti-art; personally, it has made it hard to enjoy other music lately.