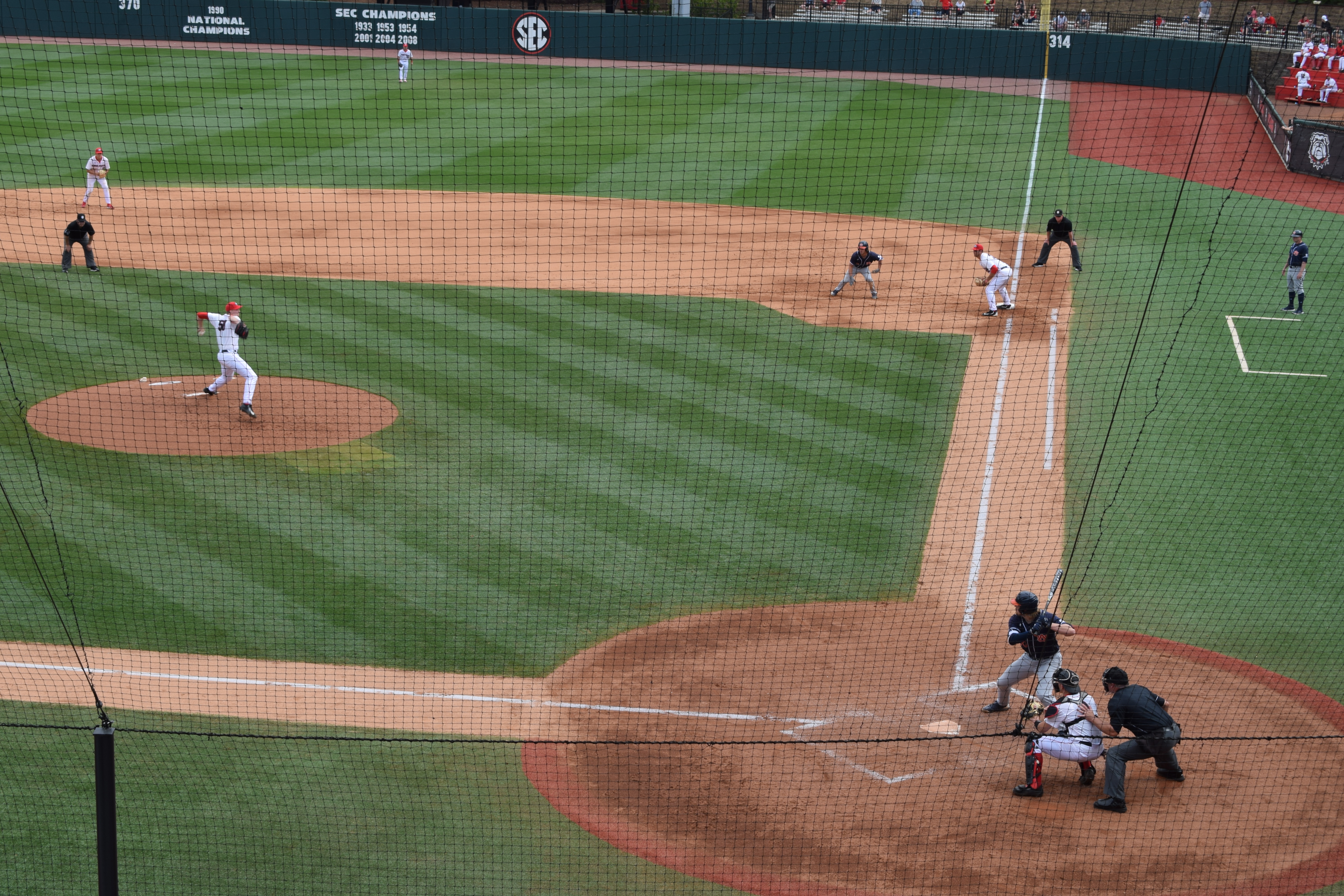 Before 2,642 rowdy fans, on a beautiful Saturday afternoon, Georgia finally got its first SEC win of the season against Auburn in a 4-1 thriller.

The Bulldogs pitching staff has struggled this season with a 5.31 ERA going into Saturday’s game but have gotten two solid outings this series. The first from Andrew Gist on Friday and then Toney Locey and Ryan Avidano Saturday.

Georgia starter Tony Locey threw a solid three and two third innings and held Auburn to only one run on four hits. His control was a little off with three walks and only two strikeouts but he avoided major damage and had a good outing in the no-decision.

Ryan Avidano, a left-handed sophomore, came in to relieve Locey in the 4th and proceeded to throw 3 innings of scoreless baseball for his second win of the season.

“He settled those middle innings down,” said head coach Scott Stricklin. “He did a great job five strikeouts and didn’t give up any runs and gave us a chance to win.”

All of the Bulldog pitchers looked composed and were able to command the strike zone keeping the Tiger line up guessing.

The Bulldog’s bats continue to get runners on but struggle to bring them in. In the first inning Georgia had runners on second and third with one out but proceeded to hit into a double play and failed to score. They hit into another double play in the third and finally broke out in the bottom of the forth.

In the forth the Bulldogs finally made good contact with runners on. With runners on second and third with one out, in a situation identical to the one in the first inning, junior transfer Will Proctor hit a sacrifice fly into center field which scored first baseman Keegan McGovern to tie the game.

Then with runners on the corners third baseman Aaron Schunk hit a single that plated designated hitter Michael Curry. Curry was initially called out on the play at the plate but it was reviewed and overturned putting the Bulldogs up 2-1 in what would end up being the winning run.

Keegan McGovern continued his hot streak at the plate going 3-4 for his third three hit game of his career. The junior is now batting .378 on the year and teams have started to take notice by pitching around him occasionally even with Michael Curry behind him. He also scored two of Georgia’s three runs in the win.

“I’m just trying to go up to the plate more relaxed,” said McGovern. “And just trying to see a pitch that’s up in the zone and put my best swing on it.”

Freshman Aaron Schunk did some damage at the plate as well for the Bulldogs. He went 3-4 with two RBIs including what would be the game winner in the 4th.

The Bulldogs put together a complete and well-played game and are looking forward with more positivity.

“If today is the first time you’ve come out to watch us play you saw a pretty good baseball team,” said Stricklin. “And that’s the thing, it’s been a little bit frustrating as we know that we can be this good and just haven’t shown it yet so hopefully this gets us over the hump.”

Georgia will face Auburn in the rubber match Sunday at 1:00 p.m. from Foley Field. Chase Adkins will be on the mound for the Bulldogs.