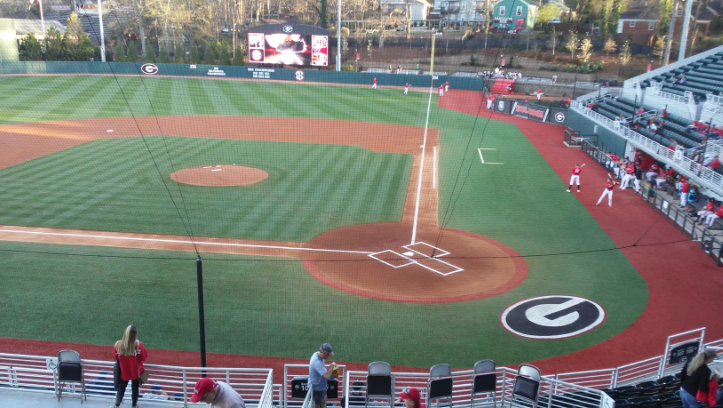 The Bulldogs defeated Xavier 11-6 in a back and forth matchup Wednesday evening at Foley Field. They were led by the bats of veterans Michael Curry and Keegan McGovern.

Finally, the offense started to heat up for Georgia after a slow season at the plate. Through their first 11 games the Bulldogs scored more than five runs only three times. But in the two game series with Xavier they put up seven and 11 respectively.

Sophomore Michael Curry had a strong outing going 3-5 with a career-high four RBIs. His biggest hit of the night came in the fifth inning. Down 2-1 with LJ Talley on base, Curry stepped up to the plate and hit a towering home run into the parking lot behind left field. It put the Bulldogs up 3-2 and put some much-needed life into Georgia’s lineup.

On the mound, the starter for the Bulldogs was freshman Justin Glover. In his first collegiate start, the southpaw gave up four hits in three innings. But, he was able to avoid any runs from crossing the plate.

“That’s the encouraging thing,” said head coach Scott Stricklin. “He didn’t have his best stuff and he put up three zeros.

He is yet another young pitcher for the Bulldogs making an appearance this season and one of whom they expect a lot out of moving forward.

Another highlight from Wednesday was the appearance of Keegan McGovern. In the sixth inning, down 4-3, Stricklin pinch hit for outfielder Logan Moody. McGovern stepped in and proceeded to blast a towering 2-run home run that hit off the top of the scoreboard in left-center field. That gave Georgia the lead 5-4.

But the Musketeers would not go down quietly. They either tied or took the lead four times throughout the game and it wasn’t until the eighth inning that Georgia finished it.

In the eighth inning the Bulldogs finally pulled away from the Musketeers by scoring five runs and that brought the final score to 11-6 in favor of the Bulldogs.

Georgia returns to action this weekend with a three game series against Rider University. The first game will be 6:00pm Friday at Foley Field.