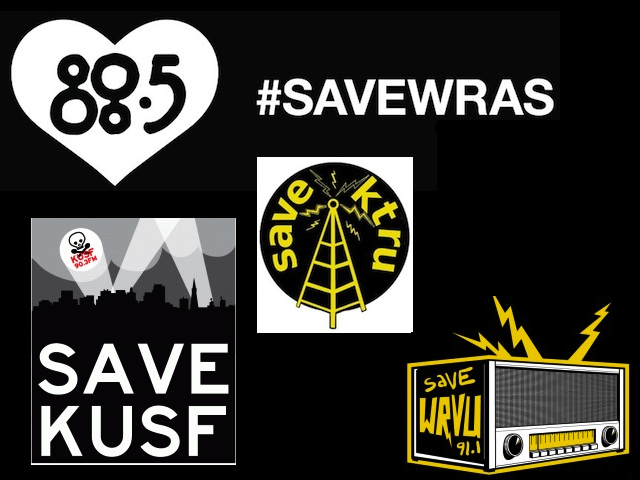 The Fight for College Radio

During an annual fundraiser for their radio station, two student DJs at California Polytechnic State University’s KCPR offered to send pictures of their genitals over Snapchat in exchange for cash donations. Whether meant as a joke or not, the university’s administration was not pleased.

The station was labeled “rogue” and complaints about lack of oversight and professionalism on KCPR surfaced. A faculty member even had her name removed from the station’s FCC license, and administration began devising a panel to oversee changes in the station.

All of these moves could have been expected from the raucous fundraiser exploits, but one note from the Dean of the Liberal Arts College struck a different chord.

“I am beginning to believe that we should sell the radio license (we have had an offer),” said Douglas Epperson in an email obtained by CalCoastNews.

This jab at the station is reactionary, but also indicative of a troublesome new trend that has been crippling college radio across the country. Student run stations are being sold to outside interests, and universities are growing increasingly unafraid of the decision.

While California Poly glowered at KCPR, supporters of Georgia State University’s WRAS gathered outside the Atlanta base of Georgia Public Broadcasting, decked out in WRAS attire and waving homemade signs to protest GPB’s takeover of the station’s daytime broadcasts. Meanwhile, Colby-Sawyer College in New Hampshire quietly sold its 90.9 frequency to a private, local foundation to broadcast talk radio in the area.

Of course, while all of these stations experienced internal turmoil, the frequency that formerly broadcast Rice University’s KTRU was playing a 24 hour classical music station. Vanderbilt University’s 91.1 FM, once home to student run WRVU, was playing National Public Radio. Those stations lost their frequencies in 2011.

College radio sales and deals have happened at a variety of different schools, from the North and South and both coasts. The schools have ranged from small community colleges, such as Lehigh Carbon Community College in Pennsylvania, to large institutions like Georgia State with an undergraduate enrollment around 25,000 students. Both public and private universities have sold their stations in similar manners.

However, the takeovers have one feature in common: no amount of backlash or student effort has proven successful in keeping a station alive. While staffed by college kids and funded by donations and student fees, a university station’s radio license is still controlled by administration. Sales and deals do not have to include students in any manner.

One of the most controversial instances remains close to home. When Georgia State announced its intentions to pass WRAS over to Georgia Public Broadcasting on May 6, station management was switching over to fresh faces and students were still preoccupied with finals. Students were blindsided by the decision even though it was discovered that the deal had been in talks for years.

“I can tell you that anything with this level of complexity and this level of benefit really is not the kind of thing you can play out in a public forum,” said Georgia State president Mark Becker in an interview with the Atlanta Journal-Constitution.  “It just doesn’t work. It doesn’t happen that way.”
While this conscious silence angered students and members of the media throughout the months to come, Becker and Georgia State administration was under no legal obligation to keep students informed of the talks. There are few federal guidelines on how a public university should handle student media, especially in radio. Licenses are owned by universities, not students, even though it is typically student fees that pay for the purchase of transmitters and studio equipment.

However, using the few resources available on the matter, Frank Lomonte of the Student Law Press Center alleged a breach of constitutional rights in the WRAS deal.

“Students at state institutions have the constitutionally protected right to choose what they publish or broadcast, free from institutional censorship,” Lomonte wrote in an open letter to Becker. “The decision to substitute administrator-chosen programming for student-chosen programming during half of each day, including the most desirable ‘drive-time’ slots, implicates the constitutional rights of the student managers to whom the University formerly afforded discretion to choose WRAS editorial content.”

Lomonte cites two court cases in evidence: Rosenberger v. Rectors & Visitors of Univ. of Va. and Kincaid v. Gibson. The two cases provide a basis for student rights, with Rosenberger dealing with funding for student organizations and Kincaid censorship of student media. The two cases do not deal directly with radio, thus making legal action tenuous against a university, but that brings about another point.

While colleges and buyers are bound by FCC regulations just as in any other deal, it has become apparent that college radio deals are different from commercial radio in who they involve. Student are often swept aside in the deals near completely, removing a key voice in the stations.

Controversy has also arisen over Georgia State’s purchase of a transmitter with student funds shortly before selling to GPB, as found in emails obtained by the Georgia State Signal. In the messages, Georgia State staff discussed openly plans for the new transmitter with GPB and the takeover occurred shortly after the equipment arrived. According to the Student Press Law Center, this could be considered a constructive fraud.

What it will take for an overhaul of FCC sale regulations on college radio is unclear; it may require a case along the lines of Kincaid v. Gibson, whether on behalf of WRAS or another station. Regardless, it is evident that something needs to change if student run radio is to continue as a major part of the American college experience.